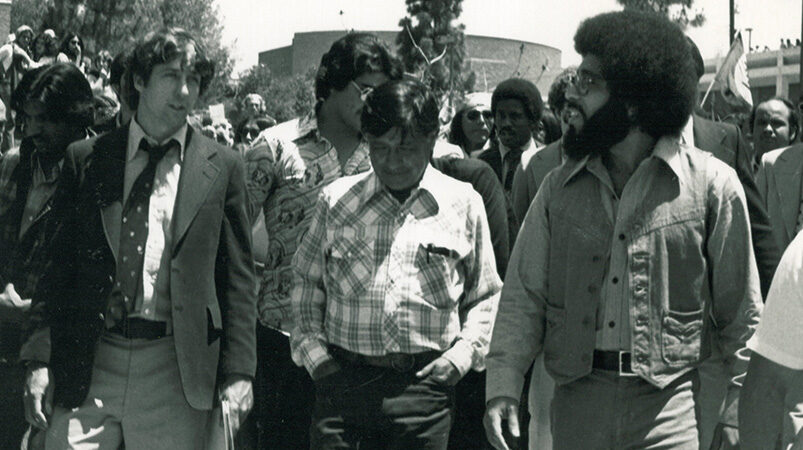 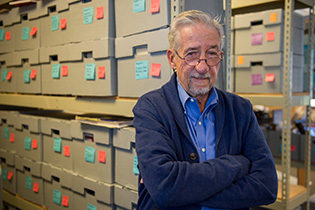 “Surprise is a very big factor in history and in social studies,” activist/author Tom Hayden, ’61, recently told a class of U-M students. “And, I’ve noticed, it’s a very big deal in life. Nothing can be predicted.”

As a founding member of Students for a Democratic Society (SDS) and its U-M chapter, Hayden was the primary drafter of the group’s passionate 1962 manifesto The Port Huron Statement. This 75-page document, advocating for participatory democracy, would come to define SDS, the “New Left,” and student activism for an entire generation. The experience led Hayden to an unanticipated career as activist, author, and politician. For more than five decades he’s fought for peace, participatory democracy, civil rights, voting rights, economic rights, and the environment.

“We are always in the presence of social movements coming and going; they are like the wind,” Hayden said to students assembled in Lorch Hall in mid-September. As if on cue, just two days later the Stamps School of Art & Design hosted a sold-out crowd at the Michigan Theater for founding members of the Russian art collective Pussy Riot and Zona Prava who were imprisoned for “hooliganism” after staging an anti-Putin protest at a Moscow cathedral in 2012.

“Just trying to comprehend how [a social movement] happens has flummoxed scholars and historians for a very long time,” Hayden said. “Why exactly did it begin? How did happen? Why did it end? And what did it achieve? These questions suggest there is a kind of cycle, a pattern to these things. But [a social movement] never turns out the way it begins. It doesn’t turn out according to the original expectations. It does not hold that we know what we are embarking on when we begin.”

Inside the Labadie Collection

For that very reason, archives like the Joseph A. Labadie Collection at the University of Michigan Library are critical to scholars who study the history of social protest movements and marginalized political communities, said curator Julie Herrada.

The collection is named for Detroit labor organizer and anarchist Joseph Antoine Labadie (1850-1933), who in 1911 donated books, pamphlets, newspapers, magazines, manuscripts, and memorabilia to U-M. Over the years the collection has grown to cover civil rights, anti-war movements, modern anarchist and socialist literature, gay liberation, pacifism, and ecology movements, among others.

“Sometimes I encounter an object and marvel at how many decades of use it has gotten, and yet it’s still here and it’s still protected,” Herrada said. “It’s so important to continue that legacy of protecting this material that wouldn’t exist otherwise if we didn’t do that.”

The Labadie Collection is now home to the Tom Hayden Papers, comprising personal documents, photographs, recordings, and government files that reveal an inside look at virtually every flashpoint in the nation’s political evolution from the mid-20th century to the present.

“Tom was there ‘at the creation,’ you might say, of ’60s protest movements,” said Howard Brick, the Louis Evans Professor of History in the College of Literature, Science, and the Arts. He hosted Hayden in his classroom earlier this month. “Through [Hayden’s] career, this collection provides evidence of how the dissent of the 1960s had a long-term effect in the social and political life of the United States.”

As a youth Hayden worked with SDS and the Student Nonviolent Coordinating Committee. He was a Freedom Rider, a member of the Chicago 8 (who were indicted for conspiracy in organizing anti-war demonstrations at the 1968 Democratic National Convention), and a founder of the Indochina Peace Campaign and the Campaign for Economic Democracy, among others. He went on to serve nearly 20 years in the California state legislature, where he chaired labor, higher education, and natural resources committees. He is the author/editor of 20 books, including the most recent release, Inspiring Participatory Democracy: Student Movements from Port Huron to Today. 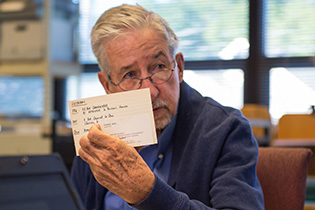 Upon participating in a 2012 U-M reunion and symposium commemorating the 50th anniversary of The Port Huron Statement, Hayden decided to commit his papers (at about 120 boxes and counting) to the Labadie Collection. Through an agreement with the University he will receive $200,000 over the course of four years to return to campus and advise students and scholars accessing his papers.

One of the most intriguing aspects of the collection is Hayden’s extensive FBI file. At about 10 linear feet, the file contains detailed government records of his travels, speeches, and other activities spanning the 1960s and ’70s. Hayden acquired the documents after successfully suing the federal government for illegal surveillance. His file, though redacted in parts, offers a fascinating view of the government’s access to and reporting of a private citizen’s life.

Another large component of the collection is dedicated to Hayden’s own career in government as a California legislator.

At the Labadie Collection, Hayden’s voice joins a chorus “comprised of people on the vanguard of social protest,” said James Hilton, University librarian and dean of libraries. 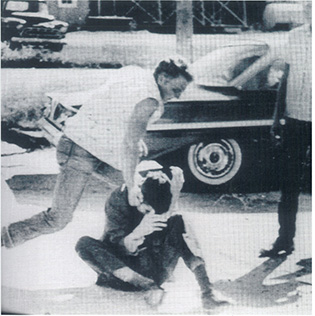 White supremacists pull Hayden from a stopped car and beat him in McComb, Mississippi, 1961. (Image courtesy of the Tom Hayden Papers held at the University of Michigan Library.)

“These are people who embody and manifest difference,” he said. “As a scholarly institution we encompass those voices and differences for many reasons: To expose how we, as a society, surveil and sometimes harass dissenters and marginalized groups; to take up important and difficult questions about when social protest is met with or incites violence, or when it passes unnoticed; and most importantly to understand when it changes the world.”

For curator Herrada, working with a “living collection” like the Tom Hayden Papers is one of the most visceral ways to learn about contemporary American history.

“It’s interesting when the subject of the archive can come and talk to you,” she said. “[Hayden] still has ideas and hopes and, with everything he’s done, he’s not jaded. He hasn’t given up. He still wants to be involved. He still wants to make an impact on the world.”

For Hayden, collections like the Labadie, as well as museums and public memorials, reawaken important conversations.

“It’s tough to pick up patterns in history if you have lost generations,” he told one assembly of U-M students. “You don’t want to awaken to a new form of hatred or discrimination against you or your friends with no historical heritage or concept of where to begin, when in fact the legacy is all around you. The space around you tells stories – if you listen. It’s in the Diag, the ‘fishbowl,’ at the Daily. It’s important to explore that legacy in your time here and then realize that you are creating a legacy of your own right now by what you do or don’t do.

“You will find you are improvising your future in some way that will be remarkable,” he said, “and will be uniquely yours.”