The art of war and memory 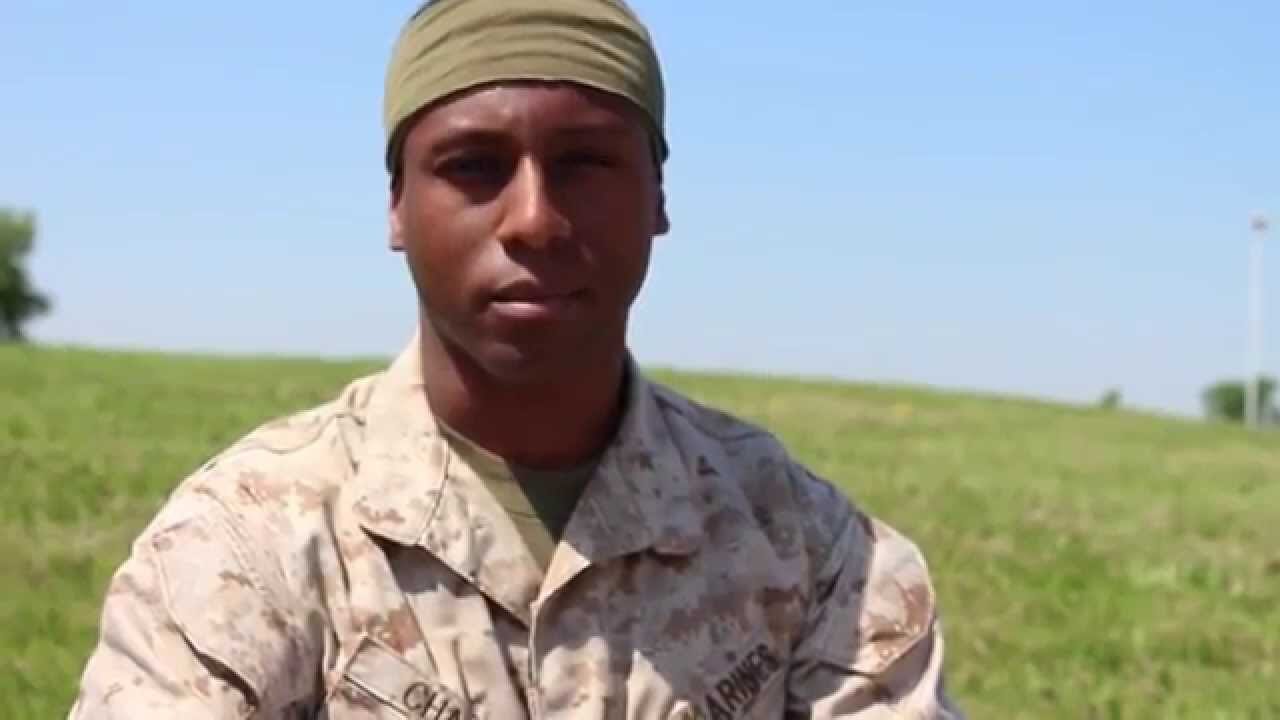 Former army specialist Andrew Floyd, AB ’14, felt a rush of pride as he pulled on his military uniform. He fiddled with the “doggone” parachute harness that was exactly like the one he’d used in Iraq.

“Soldiers’ Stories from Iraq and Afghanistan” can be viewed in the Slusser Gallery of the Stamps School of Art & Design through Nov. 12. Select images with audio are on display in the Institute for the Humanities Gallery through Nov. 12.
Floyd was preparing for a photo shoot with Jennifer Karady, the Brooklyn, N.Y.-based artist behind the series “Soldiers’ Stories from Iraq and Afghanistan,” begun in 2006. Karady had come to Ann Arbor to dramatize a memory culled from the U-M student’s military service. And as she did with every photograph in the installation, Karady had gone to great lengths to ensure the veteran’s equipment was authentic.

Floyd chatted with the actors hired to portray members of his regiment. He answered their questions about combat and showed them how to tuck their laces in their boots. Serving his country was the single greatest achievement in Floyd’s life, other than being a father, so it felt good to be back in the gear.

Past and present collide

Karady had spent months art-directing Floyd’s story with meticulous precision. She’d recorded extensive interviews with him about his transition back to civilian life and was touched by an especially potent memory about an explosion that killed some members of his unit. Floyd and his fellow survivors had to clear the debris, sifting through the ashes that remained. Though devastated, Floyd was unable to grieve, and ultimately was ostracized by his most trusted comrades. He felt guilty and confused, even after he returned home.

“An integral part of my story is this idea that in combat you have to remain mentally engaged and emotionally disengaged,” Floyd says. “That’s a difficult thing to do.”

Karady zeroed in on a poignant detail of his story. Floyd kept the gloves he used to sift through those ashes. They were sacred to him. He never wore them again, but he stored them on a shelf over his washing machine. 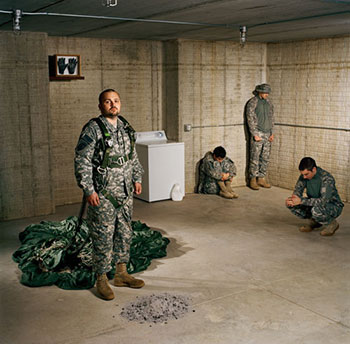 Now here he was in 2013, balanced on the precipice between memory and real time. He stood in a staged bunker, clearly separated from his fellow “soldiers” by way of lighting, composition, architecture, and body language. A pair of black gloves hung in a frame near a washing machine.

And then Karady asked if he was ready for her to place some ashes on the ground, as they’d previously discussed.

“I was like, ‘Sure, no problem,'” says Floyd. “And when she actually put the ashes on the ground, it was — not necessarily a flashback, but I remembered digging through the burnt-up cans after the explosion. It was like I was picking apart somebody else’s life and that life was just in ashes. So it was very – it was a moment for me.”

That moment is now included in a cross-campus collection on display through Nov 12. The Slusser Gallery at the Stamps School of Art & Design hosts Karady’s pre-U-M images. The Institute for the Humanities Gallery is home to her newest work, including photographs of Floyd and former Lance Corporal West Chase, a student at the Stamps School.

Karady is an internationally known, award-winning artist who has been staging these types of narrative photographs for nearly 20 years. She works much like a painter who favors allegory and metaphor. Every object in a staged scene has its place and purpose; every movement is carefully choreographed.

“A lot of my artistic process involves listening, really careful listening.” — Jennifer Karady
She recently completed a pair of residencies at U-M, first at Stamps, where she served for a semester as the Roman J. Witt artist in residence, and then as a visiting artist at the Institute for the Humanities. The two units collaborated to support her most recent photos and cross-campus exhibit.

As part of her proposal for the Witt residency, Karady added audio to the newest pictures. The viewer dons headphones and listens to each subject recount the dualities of life as both veteran and civilian. As the story progresses, layer upon layer of meaning is revealed in the picture.

“A lot of my artistic process involves listening, really careful listening,” Karady says. “I wanted the viewer to hear what I hear.”

When Floyd heard his own combat memory played back, something shifted inside. “It was like listening to a different person,” he says. “For so long I felt as though I didn’t grieve properly, that I was an unfeeling person. And I could hear in my own voice that, wow, that really hurt me.” 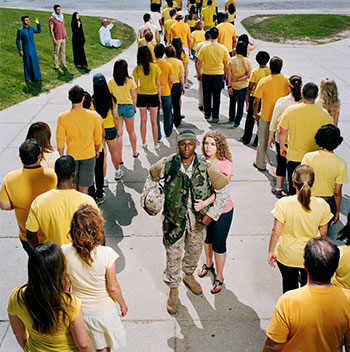 While all returning veterans face a readjustment period, about 20 percent experience mental health issues that require some form of intervention or treatment, says Sheila Rauch, PhD. She is a staff psychologist in the post-traumatic stress disorder (PTSD) section of the VA Ann Arbor Healthcare System. In addition, she is an associate professor of psychiatry and adjunct associate professor of psychology at U-M.

Not surprising, the sorts of emotional, traumatic memories captured in Karady’s photographs are termed in Rauch’s world as “snapshot” or “flashbulb” images. They are vivid, visual, and rich in detail. Part of Rauch’s research revolves around determining why such memories get stuck inside some people’s heads, and not in others, and ultimately how to get them “unstuck.”

“I really love the pictures in this installation,” Rauch says. “It’s not exploitive. It’s not made to be grandiose. It’s a beautiful way for veterans to share their stories and bring the community into their experience.”

Chase (pictured above) is an undergraduate pursuing his BFA. He already has seen the impact of his collaboration with Karady.

“Since the opening, my picture has served as a vehicle for another struggling vet to open up to one of his professors at the college he attends, and he’s looking into resources and help,” Chase says.

Karady spent a year researching PTSD before she photographed the first veteran, but not every subject she encounters suffers from post-traumatic stress. She only works with veterans who’ve chosen to work with her, and they may bow out at any point in the process. A former VA psychiatrist serves as a mental health adviser to the project. 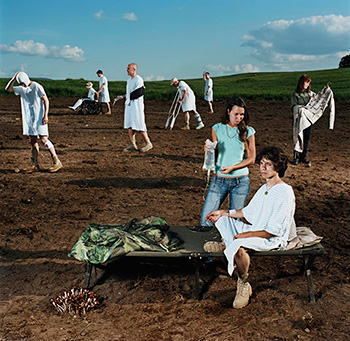 “The most important thing is to create a safe space for each veteran,” Karady says. “I’m extremely aware that I’m not a therapist. But my intention is that the process is helpful for the veteran in some way. The conceptual premise for the project – and the process – is based on a form of therapy.”

Karady works with community organizations to identify and interview interested veterans. Then she collaborates with the subject to choose, cast, and re-enact the moment they’ve identified. Every detail is planned and approved by the veteran prior to making the photograph. Each image is accompanied by text, a story told in the veteran’s own words. Karady curates the content to ensure diversity in both personnel and storylines.

In one image, a veteran peers out the window of his childhood bedroom, surrounded by sandbags and bottles of alcohol. A shadowy sniper can be seen in a window across the street. In another photograph, a combat-ready soldier fights an invisible enemy with his bayonet amid the ruins of a destroyed building. A seemingly tranquil domestic scene plays out nearby.

One photograph may take up to four months from inception to shoot. It can take much longer to arrive at the final print, text, and sound. In an effort to create a piece that is meaningful and authentic for the veteran, Karady does no digital manipulation on the final frame.

Karady’s vision for “Soldiers’ Stories from Iraq and Afghanistan” melded seamlessly with the Institute for the Humanities’ Year of Life Writing, says arts curator Amanda Krugliak.

“Jennifer’s work brings attention to a new generation of veterans within the University population and our extended communities,” she says. “The unique challenges veterans face negotiating the fissure between these two disparate worlds are ongoing, with no clear resolution. The remnants of the psychological impact of war serve as markers in their daily comings and goings, yet go unnoticed from the outside of things.”

By adding audio to her most recent images, Karady brings a visceral new dimension to the dialogue about war and memory.

“It’s important to slow down, take a moment, and really hear those voices,” Krugliak says.

Community outreach factored into both of Karady’s residencies at U-M, as veterans groups, external arts organizations, and other community partners contributed to the productions. U-M students participated in creative and technical roles, as well.

“Jennifer’s work is not calm or quiet. It articulates each soldier’s vision with a certain acuity or exactness that is startling in the way that we wake up in the middle of the night, unsure of where we are. The work is wired. It’s deliberate. It questions what is normal.” – Amanda Krugliak
As a result, a new community formed around the veterans themselves, notes Arlene Saxenhouse, the Caroline Robbins Collegiate Professor of Political Science and Women’s Studies at U-M.

She is an expert in Greek political thought and cites a profound contrast between the ways in which warriors were memorialized in ancient Greece versus Karady’s work today.

In works like Pericles’ “Funeral Oration,” the individual warrior is subsumed into the whole; the soldier exists only as a defender who serves the state. It is the state that earns renown and remembrance, not the warrior.

Karady’s photos flip that script, presenting the individual, not the state, as the central focus.

Karady is close to finishing the series, which she describes as “socio-political in an art context but not overtly political, meaning it is not clearly pro- or anti-war. I am consciously attempting to straddle this divide so the work can speak to both sides about the psychological consequences of war. Each viewer can decide for him- or herself.”

Floyd, who is pursuing a master’s degree in public policy at the Ford School, says he hopes the exhibit reminds veterans they are not alone. Collaborating so closely with an artist to share his individual story was unexpectedly cathartic, he says.

“It helped me re-engage with some stuff I had tried to bottle away. It pushed me to come to terms with my experiences, accept them, and — if I can say it — move on from them. I’m very proud of the project and I hope my photo can help some people.”