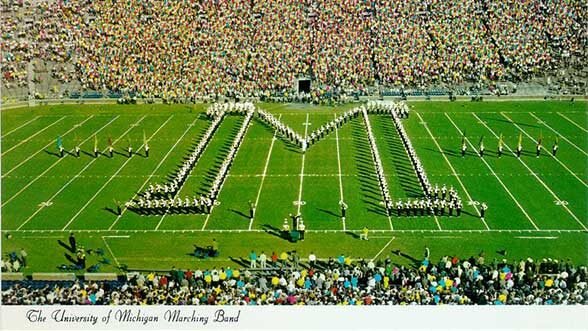 “And now, ladies and gentlemen … the Marching Men of Michigan!”

That was the Michigan Marching Band’s hallowed introduction all through the era — the 1940s through the 1960s — when George Cavender belonged to the band, then served as its assistant director.

By temperament and tradition, Cavender was suited to train men, not women.

He was raised among copper miners in Michigan’s Upper Peninsula. In World War II he commanded a Marine tank group in the Pacific. As director of the Michigan Marching Band, said a saxophonist of the early 1970s, he “accomplished a lot through intimidation and humiliation.”

But it was Cavender, against his every instinct, who first directed women in the marching band.

“Doing what had to be done after so much pressure…” 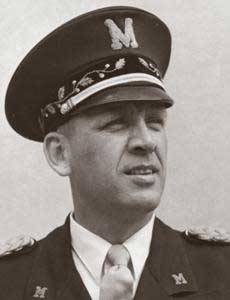 The idea of admitting women was barely even discussed during the long reign of Cavender’s predecessor, William Revelli, the legendary professor of music who, from 1935 to 1971, built Michigan’s program into the best in the nation, if not the world. (The specter of women invading the marching band arose only once, during World War II, when the number of men on campus plunged. But the marching band stayed all-male, a bragging point at the time.)

Then, in the wake of Revelli’s retirement in 1971, Cavender was appointed as the maestro’s successor. This came at a time when women on campus had been pressing for inclusion in many domains reserved for males. So the men-only rule was officially dropped.

The reason, said Allen Britton, dean of music, was “just life and times, and in doing what had to be done after so much pressure.”

The rule had changed, but George Cavender’s mind had not. He didn’t recruit women and he didn’t tell counselors about the change in policy — “I saw no reason to have done that,” he told The Michigan Daily — so few students learned about it, and no women tried out for the 1971-72 band.

At least one freshman woman, Gail Peters, asked about it, but she was told: “No spaces are open.” 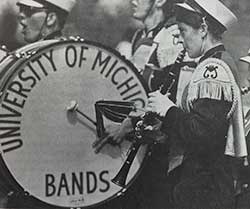 According to The Daily: “Cavender said band work would be too strenuous for [Peters], and that the band had traditionally consisted of men.”

That rationale was lost on Peters. “Guys can’t necessarily walk better than me,” she told the paper. “I’ve marched in a band for about six years. And the tradition bit is his way of saying he doesn’t want girls.”

When The Daily pressed Cavender about it, he said: “It’s more violent physical activity than would be proper for a lady. It would be too hard — we couldn’t excuse a woman from rehearsals if she had ‘female problems.’ I certainly don’t excuse any of my boys from practice.”

A girl may have enjoyed marching with her high school band, he conceded, but “now there are other activities which should be her main interest. After all, most girls play with dolls when they’re young and nobody makes them stop doing it. They join Girl Scouts and nobody makes them quit. Why should they stay with a marching band?”

“Trying to make the best of it” 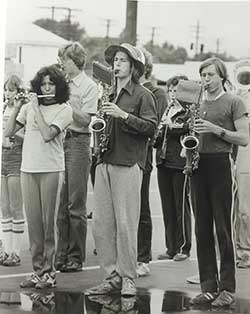 This logic was allowed to carry the day until the following summer, when student leaders at Freshman Orientation took the matter into their own hands.

“In my group, we gave a big rap encouraging women to try out [for the band],” one of the leaders, Mary Griffin, told a reporter. “It was pretty common among the rest of the leaders, too.”

“Cavender definitely did not want girls in the band,” a male member told The Daily, “but now that they’re in, he’s trying to make the best of it.”

Perhaps so, but the director still wanted no publicity about the change. He forbade members to talk with reporters about it, at least not until after the first half-time show of 1972, scheduled for Sept. 16, when the Wolverines would face Northwestern.

As the band prepared in late-summer heat, some men in the ranks were dubious.

“A girl would just never make it,” one said. “They’d never be able to lift their legs as high as we do for any period of time. On the first day of practice, the guys couldn’t even take it. Four guys threw up right there on the field.”

Do you know more about how the marching band’s gender line was broken? Tell us in a comment below!
Other men were ready for the change.

“I don’t think you can say that the work is too strenuous for most females,” Bruce Flynn told a Dailyreporter. “True, it’s probably too much for a lot of them, but if a girl has been in a marching band in high school, she’s already been exposed to a lot of this kind of work.

“Actually,” Flynn added, “I think that the reason we haven’t got any female members is that we’ve got a lot of frustrated jocks in the band.”

(For this, Flynn reported later, he was told to apologize to his fellow musicians because “it worsens the band’s position when people talk irresponsibly.”) 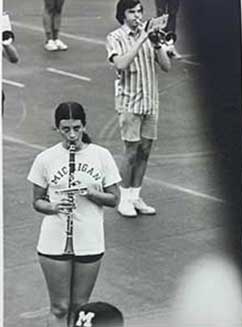 When the day came for the first women to take the field, the half-time show was somebody’s idea of a hilarious rebuke to any feminists in the stadium.

First the band played the show-stopper from Rodgers and Hammerstein’s South Pacific, “There is Nothing Like a Dame.”

Then, to the tune of “The Stripper,” the formation took the shape of a woman’s body clad in a skirt, and the announcer called to the crowd: “All those in favor of raising the 1972 skirt length higher, say ‘Aye!’”

To the band’s own cry of “Higher!” the “skirt” moved upward. Then the announcer, in falsetto, cried: “Wait just a minute — there’ll be no exploitation of sex on the football field! Let’s lower that skirt, boys!”

The director kept his judgment of the women’s performance to himself, at least in public. But the men in his ranks came to their own view.

“Everyone watches the girls in formation to see if they keep up with the rest,” one of them said.

In 1973, 38 members of the Michigan Marching Band were women. Try-outs soared in subsequent years. By 2014, nearly as many women belonged to the band as men.