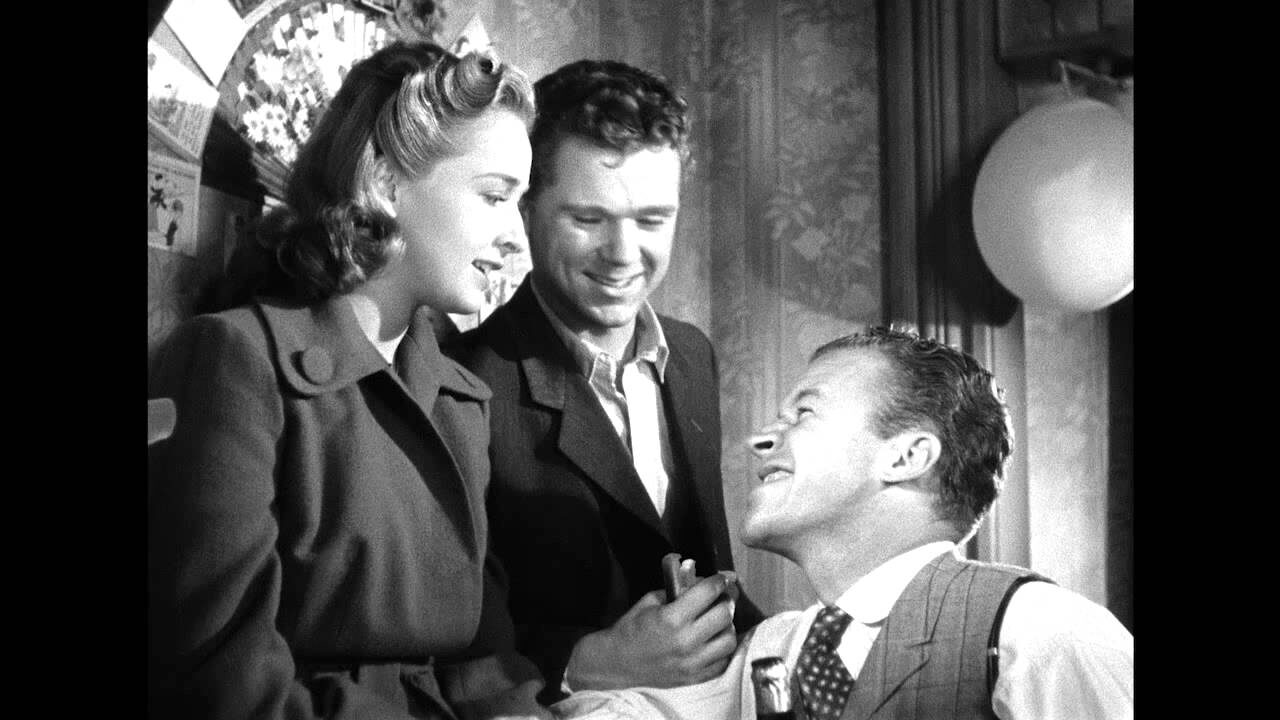 For decades the 1942 classic jazz film Syncopation virtually disappeared, frustrating those who had fallen in love with director William Dieterle’s movie. Happily, Cohen Media Group earlier this year released Syncopation on Blu-ray, DVD, and digital HD. The RKO film has been remastered from an archived Library of Congress fine-grain negative and presents a wonderful opportunity to host an armchair jazz-on-film festival this summer.

As an early-era jazz movie, Syncopation falls within the storyline traditions of other 1940s films with settings in New Orleans and narrative emphases on the historical emergence and rise of jazz performers and bands. Two examples are Birth of the Blues (1941) and New Orleans (1947). Both are classics primarily because of their great jazz numbers and performers — Bing Crosby and Mary Martin in the former, and Louis Armstrong and Billie Holiday in the latter.

In its treatment of the emergence of jazz, Syncopation’s historical span is broad. It follows the evolution of various jazz genres from turn-of-the-century Dixieland to ragtime and on to swing. 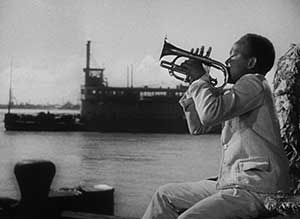 A brief opening montage set in Africa and New Orleans alludes to the role of slavery and African-American rhythms in the development of jazz. This set-up segues into a music school where Reggie, an African-American boy with a cornet, struggles to read some classical sheet music. In frustration, he bursts into a jazz improvisation. His teacher is quick to recognize his talent and encourages Reggie to follow his true muse. As the movie progresses we see the young novice evolve into the professional performer, “Rex Tearbone, King of the Cornet.”

Also introduced in early scenes is 10-year-old Kit Latimer, daughter of a prominent New Orleans architect. Reggie’s mother, Ella (Jessie Grayson) is the family housekeeper. (A cautionary note: Ella’s character borders on the regrettable archetype known as ‘Mammyism.’) Like Reggie, young Kit also demonstrates an aptitude for improvised jazz, but her instrument is the piano. Thus is set in motion the film’s central theme, leading to its title.

So what is syncopation? I asked Hazen Schumacher, past director of broadcasting at U-M. He is a renowned jazz historian and former host of National Public Radio’s long-running “Jazz Revisited” program. Here’s how Schumacher defines the concept:

“To the early fan, jazz was known as ‘syncopated music’ because of all the changes in the elements as it was being performed. Nowadays, jazz fans are more sophisticated; they are aware of syncopation as it unfolds. A good example is provided by the 1940s Glenn Miller Orchestra playing ‘American Patrol,’ a march where a key change occurs in the  middle of the orchestration. You hear an alteration of the normal, a kind of surprise.” 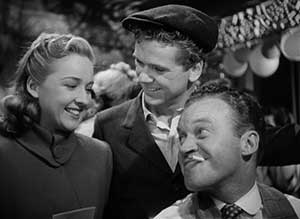 In Syncopation, Cooper’s jazz trumpeter woos fellow musician Granville by forming a band in an attempt to bring them closer together. (Image: Cohen Media Group.)

This idea is picked up as Syncopation jumps forward to 1916. Kit is now 20 years old and living in Chicago. Played by former child actress Bonita Granville, Kit is mourning the loss of her fiancé, who died on the battlefield in World War I. Enter aspiring jazz trumpeter Johnny Schumacher, played by fellow former child actor Jackie Cooper. Kit marries Johnny and from there Syncopation serves as a musical jazz tour.

Johnny hits the road with a number of bands, drifting further from Kit — and his original musical ideals — with each passing gig. Eventually he is wearing a tuxedo performing in an orchestra that plays “symphonic jazz,” complete with the dreaded sheet music.

Unhappy and frustrated, Johnny quits and forms his own band, returning to New York City. Kit, who’s been working there for a music producer, joins the band for a rousing piano number. Famous singer Connee Boswell, aglow in a glimmering white ball gown, sings a bluesy rendition of “Under a Falling Star.” Thus, an ebullient Johnny has achieved his dream of becoming a syncopating jazz impresario. He and Kit reunite. A contextualized jam session montage with jazz greats Charlie Barnet, Benny Goodman, Harry James, and Gene Krupa brings Syncopation to a close. 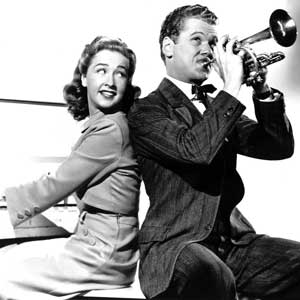 Another reason for celebrating the restoration and release of the film on Blu-ray disc is the opportunity to rediscover the remarkable talent at work in Syncopation. Granville and Cooper had barely turned 20 when cast as Kit and Johnny, but they were already film veterans. At age 10, Granville appeared in Cavalcade (1933) and Little Women (1933) with later roles in the Andy Hardy series. She also played the girl-detective protagonist in the original Nancy Drew movies.

Cooper at age nine had major roles in 1931’s The Champ and Skippy, and was the first child actor to receive an Oscar nomination for best actor in a leading role for the latter. He first gained attention in the “Our Gang” series of film shorts about a precocious group of mischievous children.

Todd Duncan, cornetist “Rex Tearbone,” was a major 20th-century baritone opera singer who in 1935 created the role of Porgy in the Broadway production of Porgy and Bess, a role he performed 1,800 times. In addition to his appearances with various opera companies around the world, sometimes as the only black cast member, Duncan taught voice at Howard University for more than 50 years.

Jessie Grayson’s “Ella” is an integral character in Syncopation, and she overcame her stereotyped role to deliver a moving performance. Grayson began her acting career with the Harlem’s Lafayette Players stock company. In 1941 she was the dedicated housemaid, “Addie,” for the Gibbens family in William Wyler’s The Little Foxes. Grayson’s other film work include Cass Timberlane (1947) and Homecoming (1948).

Strike up the band 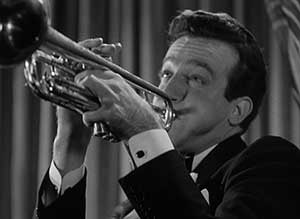 Behind the camera: Syncopation’s screenplay was adapted from the story “The Band Played On” written by Valentine Davies, University of Michigan grad of 1925. Davies would go on to win writing Oscars for the enduring Christmas classic Miracle on 34th Street (1947) and The Benny Goodman Story (1956).

Director Dieterle was one of the many filmmakers who migrated from Germany and found success in Hollywood in the 1930s. He made his first big splash with a film version of Max Reinhardt’s A Midsummer Night’s Dream (1935) with James Cagney, Olivia de Havilland, Joe E. Brown, and 11-year-old Mickey Rooney. Dieterle’s many iconic biography pictures at Warner Bros. include The Story of Louis Pasteur (1936), The Life of Emile Zola (1937), and Juarez (1939). His evolving skill for directing romantic comedy is apparent in Syncopation and he went on to achieve note for other sentimental pictures, including Love Letters (1945).

Roy Hunt’s outstanding cinematography buoys the film throughout. Hunt’s credits include the classic silent film Beau Geste (1926) and the first Fred Astaire-Ginger Rogers musical Flying Down to Rio (1933). Hunt displayed there and again in Syncopation the unique visual aesthetics of a film created from a black-and-white palette — the appealing light-and-shade luminosity that resulted in the categorical metaphor for black-and-white film art: “the silver screen.”

Hunt’s cinematography also gives textbook evidence of how four-point lighting schemes (key, eye, back, and fill light) can sculpt screen characters and enhance charisma. The design of the film’s costumes and settings also glow with reflected light. One has to marvel at how the Blu-ray disc brings Syncopation’s lavish studio “production values” to restored life.