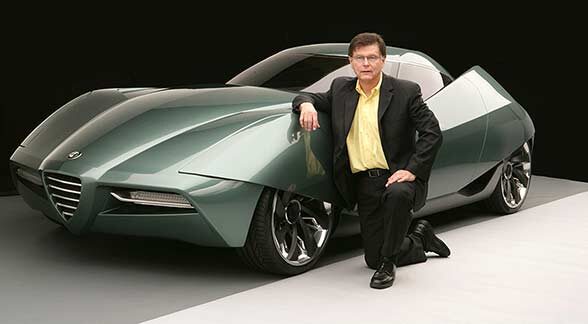 The northern Michigan car show in small-town Leland was nearly half over. Gary Kaberle, DDS ’72, stood quietly next to his one-of-a-kind, world-famous car, letting the vehicle do most of the work. Its striking and somewhat odd configuration – very futuristic – drew virtually everyone who strolled by.

Kaberle was showing his B.A.T. 11dk. It has no engine. No transmission. No internal apparatus of any kind. But it comes with a story as compelling as its mysterious name. 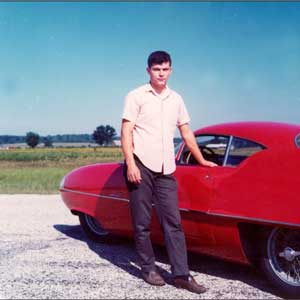 It began in 1963 in Evart, Mich., a featureless small town surrounded by featureless farmland. Kaberle, 17, was driving to a county fair with his cousin when he spotted a rural used-car lot and an odd-looking vehicle beneath vapor lights.

“It kind of looked like a space ship,” Kaberle says. “I didn’t know if it was pretty or ugly. I just knew, ‘This is cool.’”

The teenager was hardly an auto enthusiast, but he “walked around and around the car for 20 minutes. I couldn’t tear myself away,” he says. “It was like I connected with it for some reason. It was out of the box. I liked out of the box.”

Kaberle convinced the dealer to part with the car for a whopping $2,600. He got his mother and grandmother to loan him what his earnings from his job at a popcorn stand didn’t cover. A jubilant teen with his first set of wheels, Kaberle had no idea how old the car was or where it came from. He didn’t care.

The following summer, a man approached the popcorn stand during Kaberle’s shift. “I know what that car is,” he said, pointing to the nearby vehicle. “It was on the cover of Road & Track in 1958.”

Kaberle found the magazine and discovered that the famous Italian car designer Franco Scaglione had essentially introduced aerodynamics in cars via three stunning prototypes built during the 1950s. They were named the B.A.T. 5, B.A.T. 7, and B.A.T. 9d. The prototypes were built by the small firm of Bertone of Torino, Italy. Alfa Romeo provided the chassis. B.A.T. stands for Berlinia Aerodynamical Technica. The vehicles were a sensation, but they never went into production, and eventually disappeared. Or so everyone thought.

Kaberle’s car was none other than that original B.A.T. 9d. 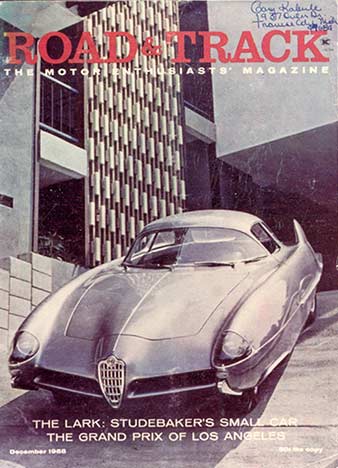 Delighted to learn about his vehicle’s fame and history, Kaberle struck up a correspondence with Nuccio Bertone, himself. “I thought you might like to know I have one of your B.A.T. cars,” he wrote. The two exchanged letters back and forth several times. And while Kaberle loved his car, he never quite comprehended how truly special it was.

In the meantime, life went on. Kaberle earned his dental degree at U-M and opened an office in Traverse City, Mich. In 1976, he married a woman named Debbie and focused on his growing family. All the while, the B.A.T. car sat in the garage, unrestored, often in the way – but never at risk of being sold by its loving owner.

In 1989 Kaberle was inspired to restore the vehicle and enter it in a Detroit-area car show. It was only then that he began to realize what he was dealing with. A passionate B.A.T. devotee named Kim Pontius nearly tripped over himself getting to Kaberle.

These B.A.T. cars had been the subject of urban myth for years, Pontius explained. People said they never had been driven, and had been cut up and cast away. According to one legend, two of the cars were hanging upside down in someone’s garage. Fans of these cars, including Pontius, were absolutely obsessed with them.

Turned out Pontius also was a journalist. He interviewed Kaberle for the cover of The Alfa Owner magazine; soon after, Road & Track published a lead story on the car. Both articles ignited national and international interest in Kaberle’s car. Life changed overnight.

Invitations to prestigious auto events and car shows began pouring in. The pinnacle came when Kaberle and his wife were invited to attend the Pebble Beach Concours in California. It is one of the world’s top car shows. There, the B.A.T. 9d gleamed like a fashion model next to the B.A.T. 5 and B.A.T. 7, which also had been located and restored. The legend was partly true: The B.A.T. 5 had been partially cut up and was found hanging upside down in a garage after all. The B.A.T. 7 had been restored and was in Northern California.

Pebble Beach was a head-spinning experience for the Kaberles. The B.A.T. 9d captivated the crowd, which even included Nuccio Bertone, who died just seven years later.

It seemed like a fairy tale life for a while as the B.A.T. 9d earned fans in show after show. But then Debbie Kaberle was diagnosed with breast cancer. She was just 39. And the cancer already had metastasized.

The drug tamoxifen, today a treatment for breast cancer, was still experimental – and hugely expensive. The couple, together, made the decision: They would sell the B.A.T. 9d car to pay for Debbie’s treatment. In 1991, the car brought about $1 million – and two precious additional years together before Deb died in 1993.

And so it was that the two great loves of Kaberle’s life were gone. 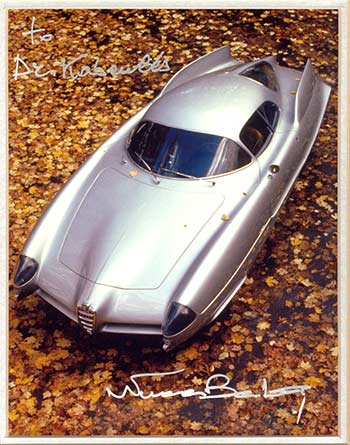 This turn of events would have devastated most people, but Kaberle is not most people. At this point he was probably the world’s top B.A.T. car expert.

“They call me the real Batman,” he says.

In reality, he was a dentist in a small town. But he decided to resurrect the B.A.T. car tradition by designing a new model, himself. It would revive the B.A.T. car line, he planned, but it would do much more than that. He would dedicate the car to breast cancer awareness. Wherever he went with this new B.A.T. car, a big sign bearing a pink ribbon would go with him.

So Kaberle began designing a couple of scale models of the B.A.T. 11dk. He got others on board, and by 2006 he was in Italy, convincing then-Bertone owner Lille Bertone to design and build a full-scale new B.A.T. prototype. It would be a model only – no engine or internal works. The goal would be to inspire those with means to actually order a real B.A.T. 11dk.

Against all odds, and under the spell of Kaberle’s unflagging optimism, one of the world’s top designers, David Wilke, was assigned to the project.

Kaberle, footing much of the bill, insisted on naming the new model – with the dk representing the initials of his late wife.

By 2008, the car was nearly finished and set to debut in Bertone’s spot at the Geneva Car Show in Switzerland. But the company was teetering on bankruptcy and beset by family rivalries. Lille Bertone canceled the company’s appearance at the show for the first time in 50 years. Kaberle and the Bertone designers were undeterred. They secretly completed the model and arranged an invite-only debut at an offsite Designers Night during the Swiss show.

And so the model B.A.T. 11dk became a sensation in its own right. It appeared in some 40 magazines, including Alfa Week, Car Styling, and Autoweek. The car captured the front page of the Automotive News’ coverage of the Geneva show. And it was named “Concept Car of the Year” by Sky Motoring, a British media outlet.

The B.A.T. 11dk was formally introduced to the U.S. market at the Detroit-area Meadow Brook Concours d’Elegance in 2008. Not to be outdone, officials from the North American International Auto Show invited him to show the B.A.T. 11dk at the 2009 event in Detroit. Kaberle was the first-ever individual in the show’s history to have a car on the main floor. His vehicle sat next to an original VW bug.

Said one of the show’s organizers of the B.A.T. 11dk, “This car is not just cool. This car truly has achieved iconic status.” 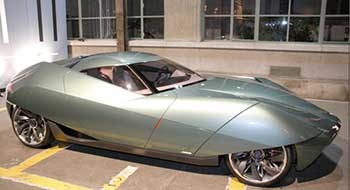 As momentum gathered, Kaberle sought buyers in hopes of building two fully operational B.A.T. 11dks. He approached Alfa Romeo, Bertone, and others. The plan was to put the car on an Alfa Romeo 8C chassis, with a 47-liter Maserati V-8/450 engine made by Ferrari. Alfa would bring the B.A.T. 11 dk to market in the U.S. Kaberle hoped to use the cars to generate funding to support breast cancer research.

But despite his best efforts, everything stalled. Bertone was played out. Alfa Romeo hedged. Kaberle lobbied others, but they put him off. For the first time since 1963, Kaberle’s unbelievable B.A.T. ride was over.

But he kept at it, calling Alfa Romeo dealers, staying in touch with the Bertones, wooing investors, and showing his car. At that recent show in Leland, Mich., he hung a six-foot tall sign with a pink ribbon and the slogan, “Dreams and Designs for a Cure.”

People at the show may have been drawn in by the vehicle’s famous pedigree, but they left inspired by Kaberle’s story and his mission. He was struck by how many lives had been affected by cancer.

“It resonates with so many people,” he says.

So that’s what keeps Kaberle going now. If he can get the new B.A.T. cars manufactured and sold, he says, he can reach his greater goal of marrying hope for a cure to one of history’s most intriguing cars.

Bottom line, he says, “I’m here to prove one person can make a difference.”