Greater than its parts

And the award for best ensemble goes to … 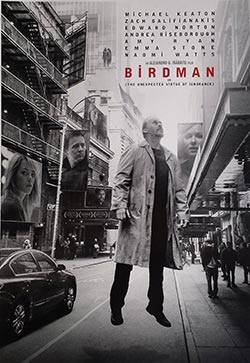 In this season of movie critic’s kudos, Golden Globes, and Oscar nominations, a somewhat random category pops up from time to time: “Best Ensemble Cast.”

The Screen Actors Guild has an official place in its awards ceremony for “Performance by a Cast” and the National Board of Review hands out a “Best Ensemble” citation. Several other awards-granting societies also recognize the work of a cast as a whole. The Oscar-dispensing Academy of Motion Picture Arts and Sciences is one group that does not.

Last year, the relatively small cast of Birdmanreceived numerous accolades for its talent. Such honors this season have gone to The Big Short(National Board of Review) and Spotlight(New York Film Critics Circle).

Much like Birdman,both films have fairly tight casts and taut dramatic storylines. Each got me thinking about just how rewarding and entertaining a well-made ensemble film can be; also they led me to consider some of the varying distinctions within the ensemble film as a categorical type. The term seems to offer a wide range of critical applications.

In years past, ensemble citations have gone to very different kinds of films: for example, Short Cuts(1993), Traffic(2000), and Crash(2004). Each of these pictures showcased a large cast of characters breathing life into a complex narrative structure. Characters who may or may not know one another are juxtaposed on the screen as part of a larger thematic focus. 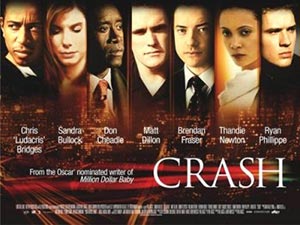 Director Robert Altman drew Short Cutsfrom the work of Raymond Carver – short stories and a poem – to portray the lives of 22 Los Angeles residents navigating a bleak, noir-like version of the city. As one character leaves a pharmacy, another enters. Never having met, neither acknowledges the other although each figures into the plot’s evolving thematics.

Similarly 17 disparate characters in Paul Haggis’ Crashare interwoven into a composite take on racism and bigotry in contemporary suburban America.

In Steven Soderbergh’s Traffic, we meet 20 major characters connected to a drug trafficking ring with ties from Ohio to San Diego, and from Washington, D.C., to Mexico. Described as an “observatory” film Traffic’snarrative uncovers the many levels of illegal drug trade and its wide-ranging impact on human lives. Each of these provocative, well-acted films was singled out for best ensemble/casting citations. 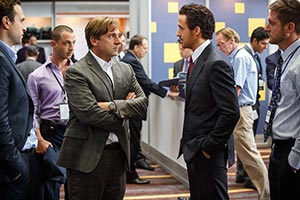 The Big Shortbears striking similarities to the above ensemble films: a set of characters who are part of a complex narrative structure in which writer/director Adam McKay juxtaposes overlapping elements to convey a big thematic idea. McKay’s cinematic styling is eclectic. He mixes rapid-fire editing with satire and farce in the form of direct-camera presentations in which players speak to the audience.

Bravely, the script zeroes in on the oftentimes baffling double-talk, insider lingo, and incomprehensible acronyms that defined the 2008 financial crisis. Christian Bale, Steve Carell, Ryan Gosling, John Magaro, and Finn Wittrock form a composite set of financial outliers who gain prescient insight into market instabilities that would lead to the catastrophic economic collapse. Thanks to such a fine ensemble cast, The Big Shorthelps demystify a little-understood cataclysmic event in recent American history — all while entertaining us. 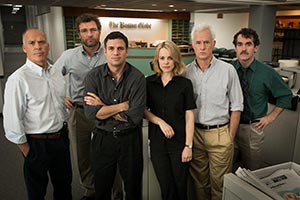 A distinctly different type of ensemble film, and one which I think ideally suggests the purest meaning of the term, can be parsed in Spotlight.This time the cast comprises a relatively small number of characters who are intricately tied to one another.

Such an ensemble film is limited in setting and location. Resembling the qualities of a “chamber drama,” the action remains intimately focused on a connected set of screen personae. And although the drama may move out into a larger world, a central location remains a focal point in the narrative.

August: Osage County(2013) is similar, as characters of shared connection come together for the funeral of the family patriarch. The gathering at their Oklahoma home sparks tensions, old and new, and hidden secrets surface as the family members reunite.

Four characters form the core of Spotlight’s ensemble; they are part of an investigative journalism unit at The Boston Globethat produces a special section called “Spotlight.” Robby (Michael Keaton) is the unit leader who refers to himself as “the team coach”; Sacha (Rachel McAdams) is the team’s determined purveyor of facts; Mike (Mark Ruffalo) is the perpetually impatient, go-getter; and Matt (Brian d’Arcy James) is the methodical, steady-Eddie member of the team. The film’s inciting incident occurs with the 2001 arrival of the Globe’snew executive editor, Marty Baron (Liev Schreiber). He suggests the “Spotlight” team explore the suspected hierarchical cover-up of widespread child abuse by Catholic priests in the Boston Archdiocese.

The four reporters, all raised Catholic, react to the suggestion with uncertainty and doubt. Once they take on the investigation, the film evolves into a detective procedural. The reporters uncover long-hidden and suppressed secrets, despite stern warnings from insiders who know the stronghold the archdiocese has on Boston and, not insignificantly, on its devoted churchgoers. (The narrative notes that more than 50 percent of the Boston population is Catholic.) Throughout the year 2001 the “Spotlight” team’s discoveries build in startling ways that culminate in an expose with far-reaching ramifications that spread around the world.

Tell us about your favorite ensemble film(s), classic or contemporary.
Director/co-writer Tom McCarthy masterfully maximizes the ensemble’s best qualities in both action and framing. As the team members separate to pursue various leads, we see them ringing doorbells, interviewing lawyers and victims, obtaining access to (hidden) legal documents, following the leads of a victims’ rights organization, and speaking by phone to an unseen ex-priest who works on rehabilitation of pedophile priests.

In one beautifully staged scene, team leader Robby receives a phone call with critical information. The other three reporters are at their desks in their shared “Spotlight” office. As Robby speaks to the caller in the background of the shot, impatient Mike, in the middle of the frame, leans out and cocks his head to hear what’s being said; Sacha, on the other side of the room sits quietly by, listening; in the foreground Matt pauses his desk work to catch what is being said. This triangular blocking of the team is not only a visual cue into each character’s motivation, but affirms for the viewer the team’s shared commitment to and investment in the sexual abuse investigation.

I find this to be ensemble filmmaking at its finest — in words and in images.