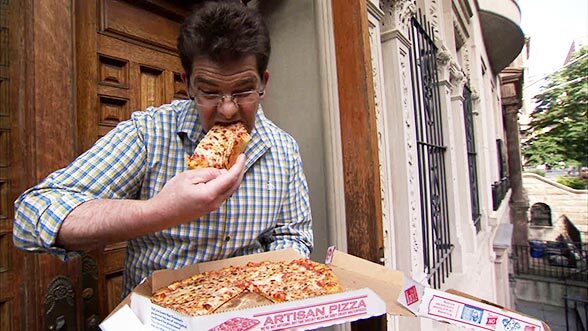 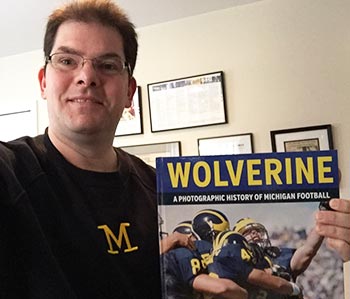 Comedian Jon Hein is co-creator of the well-known cultural catchphrase “jump the shark,” which refers to the point at which a television show (or anything, for that matter) takes a sharp downturn in quality. The phrase itself is a reference to a 1977 episode of the sitcom “Happy Days” in which a water skiing Fonzie jumped a live shark.

Hein graduated from the University of Michigan in 1989 with a double major in communications and history. He’s an avid Michigan sports fan and often returns to Ann Arbor to take in a football or basketball game.

In his latest book, Fast Food Maniac (Three Rivers Press, 2016), Hein explores his other great passion, fast food, providing the reader with an informative and irreverent look at his favorite restaurants. He offers expert advice on what (and what not) to order, and he provides insider tips on things like secret menu items.

Alan Glenn: What made you want to go to the University of Michigan?

I grew up in Pittsburgh, then moved to New York in the fourth grade, but I wanted to go to a school that was a little far away from home, that was strong academically and had a really good football team. So U-M was very high on my list. I’d always heard great stuff about Ann Arbor. I think it was the first school I got into. I didn’t even visit. I just signed up. I was all set to go.

AG: Do you have any particularly strong memories of your time here?

I lived in South Quad my freshman year. I played intramural softball. On my team were Mark Messner and a few other guys from the football team. So we never lost, which was fun. I remember the huge snowball fight we had between West and South Quad the day of the first snow, and being right around the corner from Blimpy Burger. I was in Comedy Company, which was part of UAC [University Activities Center], for the next three years, and we put on shows at the Mendelssohn Theater. From there — I’m jumping ahead a little bit — I helped form the comedy troupe Just Kidding. We played the Power Center and Michigan Theater. That was pretty special.

AG: You spent a lot of time in the Big House, I assume.

I did. I was there from ’85 to ’89. I was there when Mr. Harbaugh was a quarterback. My first year the football team only lost one game. Then I was there for the Miami game in 1988 where we were up a lot. We thought the game was over. Everyone was singing, “Na-na-na-na,” and I’m like, “It’s too soon. Don’t do that.” Unfortunately, I was right. We lost, but I loved going to the games. I remember when we won the title in basketball in ’89, my senior year. That was unbelievably exciting as well.

AG: So, you loved sports. It seems like you also had an inclination for the stage. 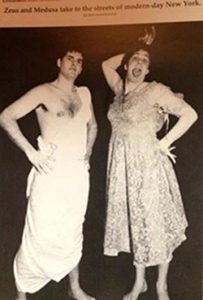 Hein (left) as Zeus and Craig Neuman as Medusa in a sketch from the Just Kidding comedy troupe. (Image courtesy of Hein.)

One of the classes I took early on was playwriting. In those classes, students acted out your plays. I thought that would be fun, and I did that for a couple semesters. I’m a big sketch comedy fan and so I auditioned for Comedy Company. I made the cast, and it was really successful. I did that over the next couple of years, with a few of the same guys and gals, and when we graduated we formed Just Kidding. We went on the road and ended up booking about 75 shows at colleges all over the country. That’s when we sold out the Power Center. We sold out the Michigan Theater. We had a lot of success. That certainly came from being at U-M, being with some smart, funny people. I loved my time there. I really did. My daughter goes there now. I met my wife there. Michigan is a very special place for me.

AG: Do you come back to visit?

With my daughter being there now, it’s great because it gives me an excuse to come back. Last fall I was asked to speak at an event. I was then invited to give the commencement address for the School of Communications graduating class. That was a huge thrill. Talk about coming full circle. I try to get back for a game or just to visit, walking around town and remembering what fun I had there. It’s amazing how Ann Arbor has changed, yet remains the same in so many ways.

AG: Tell me about the origin of jump the shark.

I was sitting with my buddies at 807 South Division and we were talking about when our favorite shows started to go downhill. A couple examples came out, and somebody said “Happy Days.” My roommate of four years, my freshman roommate all through graduation, Sean Connolly, who’s an ROTC guy, and very, very funny, said — not in a joking way — “When Fonzie jumped the shark.” There was a pause in the room because we all knew exactly what he meant.

I used it in a sketch we did for Comedy Company, but at home we would use that phrase to describe everything that happened in our lives. We’d say, “Did you see the game last night, they jumped the shark.” Throughout college, we’d use the phrase. Fast-forward 10 years to when I had a computer training company. I needed to figure out how to teach a class in building a website in HTML. To practice, I decided to build my own. I remembered back to that first conversation we had about jumping the shark. I thought, “What a great way to continue that conversation over the Internet.”

I put together a list of about 150 or 200 shows. I contacted those friends. I was like, “Do you remember when this jumped the shark, when that jumped the shark?” Then I put it up on the Internet. It was one of those things where it became, “Oh, you’ve got to see this site.” It became a cool thing to check out. Then progressively, it just built and built and built. I worked on it for 10 years, 365 days a year. Never my day job, always a hobby, four hours a night. It ended up being an expression. Now everyone is familiar with the idea of when something goes downhill, not just on TV, but really of anything in general.

AG: Do you have any favorite moments where “jump the shark” was referenced in popular culture? I’m thinking of the opening of “The Simpsons” where they were shown jumping a shark.

That one was special. Also I got to do an article with Maureen Dowd of The New York Times about politicians jumping the shark. That one was pretty cool. Meeting Henry Winkler [who played Fonzie in “Happy Days”] and having him embrace it, that was definitely special. But I was always amazed that people would continue to run with the expression. Everyone got it. Even people who hadn’t seen the “Happy Days” episode. It definitely struck a chord.

AG: Tell me how you got started working with Howard Stern.

There was an article in Sports Illustrated, I believe, about the Phoenix Suns jumping the shark. Fred Norris from “The Howard Stern Show” saw it. He’s like, “We should get this guy in here.” It ended up being just a phone conversation I had with them about different shows and when they jumped the shark. We had such a good time and they liked me so much they asked me to come back every few months because, thankfully, with television, you can always count on different things jumping the shark.

That was around the year 2000. I would be a recurring guest. Then when Howard decided to go off terrestrial radio and come over to Sirius, he was looking for someone to host “The Wrap-Up Show,” which is sort of a post-game show for “The Howard Stern Show,” and he chose me. Which shocked me because I thought I was a good guest but I’d never hosted anything on the radio before. This is Howard Stern we’re talking about, who’s the best of the best, and there’s no way I was going to pass up an opportunity like that. I started there Jan. 9, 2006, when Howard started on satellite radio. I’ve been there for the last 10 years. 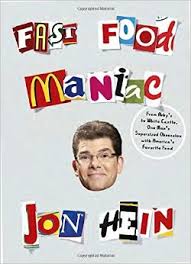 Yes, I do. Fast Food Maniac. A couple years ago, I hosted a TV show for Destination America called “Fast Food Mania.” I would go to different places and profile the restaurants, talk with the people — a nostalgic, fun look at that world. People were like, “You should do a book. You know a lot about fast food.” I thought about it but really didn’t act upon it. Then a couple years ago, after the TV show had concluded, I realized I still had a lot to say about the industry and about the places. I wanted to write something fun about that world that I thought people would respond to.

I did a whole bunch of research, which I would’ve done anyway, going to the restaurants. But I dug in deep and tried to come up with something that I thought people would get a kick out of, learning about how a place like White Castle or Domino’s came about, what they’re good at and what they’re not so good at. I have some lists in there. It’s a fun read. That was the goal of the book.

AG: You mentioned Blimpy Burger earlier. Are they in the book?

You bet they are. I cover 43 national restaurants and 26 regionals. The regionals are important to me because if people go to different places in the country, they don’t necessarily know where to go, if they’re looking for that type of meal. For me, if you go to Ann Arbor, and we’re talking fast food, you’ve got to go to Blimpy Burger. I mean, you’ve gotta go to Krazy Jim’s. When I lived on South Division, and later John Street, I would pass that place every day walking to campus.

To me, part of the charm was how run down it was. The process of ordering stuff and, of course, how great it tasted, fit perfectly into my world. When you go to Ann Arbor, everyone tells you to go to Zingerman’s, but Krazy Jim’s Blimpy Burger is way up there on my list.

AG: When you go to Blimpy, what’s your burger? I usually get a quad with grilled onions and American cheese.

I detail my Blimpy ritual in the book. I know the rules — you’ll never see my cell phone out. I get a quad on a plain roll with grilled onions and pickles. No cheese. I also get something from the fryer, either fries, rings, or a mix. And I wash it all down with a diet IBC root beer.

AG: What’s ahead for you?

Howard just signed another five-year deal, and I’d like to continue to do more with him. I’ve had opportunities to go on shows like “MLB Now” and talk baseball and “Loudmouths in New York” to talk New York sports. I love talking sports. I hope to have more opportunities to do that. Maybe I have another book in me. I’m going to have to see where things take me but I’m going to enjoy my daughter’s next four years in Ann Arbor and live vicariously through her.

As I like to say, when all is said and done, I know what’s going to be on my headstone — that I finally jumped the shark.