The women of Henderson House 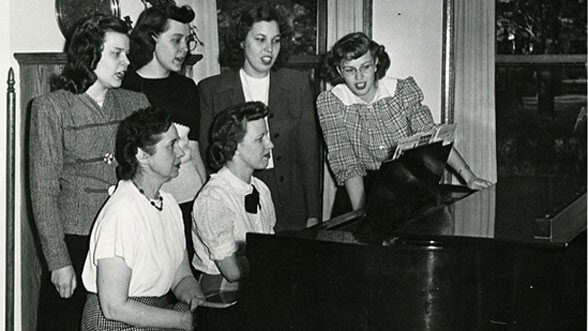 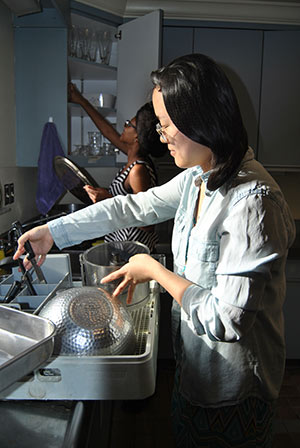 Willing to work for it

Every day at 6 p.m., 28 young women gather at a long table in a handsome red-brick home at the corner of Hill and Olivia Streets in Ann Arbor — Henderson House, the smallest unit in Michigan’s sprawling system of student housing.

They dine on food they cook themselves in a kitchen they clean themselves in a house they manage themselves. In exchange for their labor – roughly six hours a week — they pay a little over half the fees for room and board that U-M charges to students in the traditional residence halls.

Living, working and studying together, the women of Henderson House embody in microcosm the ideal of diversity that U-M promotes among its students. About half come from families of African, Latin American, Asian, or Middle Eastern origin, and the native-born Americans come from as far away as Hawaii and as close as Ohio.

Perhaps without fully realizing it, these students owe their experience at Henderson House to generations of women who worked to make such a place possible through decades of setbacks, hard times, and war. 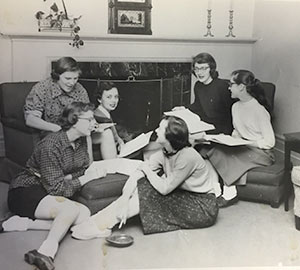 For some 40 years after the first women were admitted to U-M in 1871, female students, like men, lived in Ann Arbor’s flourishing boarding houses — a state of affairs that raised increasing concern among faculty and alumni as enrollment rose. With growing numbers, it was felt, women students needed supervision in their living arrangements. So a movement for residence halls began, and by World War I, women were moving into small dormitories named for Helen Newberry, Betsy Barbour, and Martha Cook.

At the same time, public-spirited alumnae began to argue for equal accommodations for a certain number of academically able women who couldn’t afford the cost of living in the new dorms. Members of the Michigan League (the women’s counterpart of the all-male Union) and the Detroit Association of University of Michigan Women began to raise money (most of it by bake sales) to build a house.

Then came America’s entry into World War I, which threw all U-M planning into disarray. The plan to build became a plan to buy an existing house at 1227 Washtenaw Ave., near the corner of South University. Some 15 women moved in for the fall term of 1917, and the residence was christened Alumnae House. With all cooking and upkeep done by the students themselves under the eyes of a live-in director and an independent board of governors (all women), it was the first co-op at Michigan. 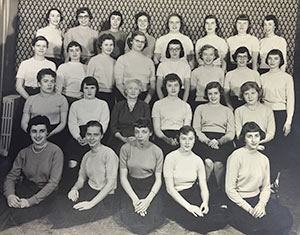 The new house was short-lived. It fell to the wrecker’s ball when Forest Avenue was extended in 1926, and the women moved into new quarters right next door.

The men who dominated the University’s administration saw the women’s residences as places that would nourish, as President Alexander Ruthven put it in 1933, “the dignity, the culture, the broad sympathies, and the strength of character that we would like to think of as embodied in the term ‘a Michigan Woman.’”

But as the Great Depression wore on, women were working behind the scenes to expand opportunities for female students pursuing higher education as a way out of economic disaster. Alumnae House was too small. The building was deteriorating. New quarters were needed.

So in 1937, the Alumnae Council of the U-M Alumni Association launched a 10-year fundraising drive for a new and bigger co-op residence. They intended to name the new building for Mary Bartron Henderson, a U-M alumna of 1904 who helped spearhead construction of the Michigan League and pushed for more co-op housing for women. They selected a site on Observatory Avenue, just north of the new Mosher-Jordan Hall, overlooking the women’s athletic fields. 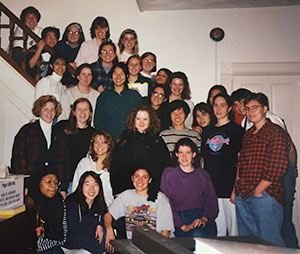 The Alumnae Council knew of at least 150 women students who were paying for their own U-M education in whole or in part. They wanted to provide co-op housing for at least 20 of them.

The building campaign went forward under the darkening skies of World War II, and by 1940, when the Council pitched the project to the Board of Regents, they portrayed Henderson Memorial House as an exercise in protecting democracy.

“Looking at the chaos of the world today,” wrote Dorothy Connable, chair of the Building Committee, “most of us are desperately wanting to do something which will insure to our country its democratic way of living. Most of us will work for it. Many of us would die for it. It is not a far cry to say that the proposed plan is a tangible way of supporting and strengthening our freedom … To us it seems a chance to help build citizens whose maturity of judgment may contribute to guiding us through a crisis.”

To be sure, Connable wrote, each resident would be “of good intelligence and character,” but she would also need “a personality resource — including an emotional stability and maturity which will allow her to contribute to and profit by this rather unique social experience.”

Making it work on Hill Street

Related: New site for the Trotter Multicultural Center.
The Regents approved the plan. But again, war froze all building projects. When peace returned, the University vetoed the site on Observatory; enrollment was about to boom, and the space was needed for the much bigger dorm that would eventually be named for Alice Lloyd, U-M’s progressive dean of women. And the rising cost of construction would likely put a new building out of reach. 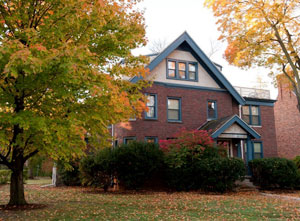 Once again, the organizers had to settle for buying an existing house. But this time they got a prize — the lovely residence of Dr. Carl Huber, professor of anatomy and dean of the Rackham Graduate School, at 1330 Hill St. With strong support from Dean Lloyd, the Regents agreed to kick in $12,500 toward the purchase.

The house wasn’t ready, but the war’s end brought a terrible squeeze in student housing. So, ready or not, the house took in 15 women residents in that first fall of the postwar era.

Alumnae House on Washtenaw, renamed Mary Markley House in 1944, struggled on until 1950. When it closed, its furniture, dishes, and silverware were hauled over to Henderson House, which was soon expanded and remodeled to accommodate up to 30 women in 14 doubles and two singles. 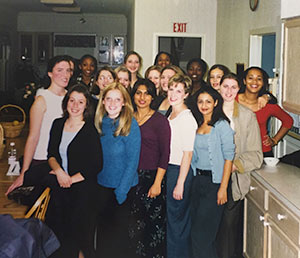 In the 1950s, life in Henderson House settled into a routine that looked like life in any sorority, except all the work was done by the residents. Each day, a resident was expected to put in an hour to keep up the house, with special projects on Saturdays.

Songs at dinner became traditional, with such favorites as “Farm Federation — the Backbone of the Nation” and “A Gentleman Handsome Stepped Out of the Transom.”

Rules were strict. Robes were permitted downstairs only at breakfast, with Bermuda shorts and slacks appropriate only at lunch, while “skirt, sweaters, and bobby sox are the proper attire for Sunday through Friday dinner.” Male guests were welcome only at dinner — with the house director’s OK in advance — and if men were entertained in the downstairs ping-pong room or the upstairs library, the doors were to be left wide open.

The 1960s and ’70s brought the easing of such restrictions in campus housing, and Henderson House moved with the times. Yet the cooperative living arrangements remained, as did an independent board of interested alumnae and other women.

… A way of supporting and strengthening our freedom

Share your memories about co-op living below.
From the testimony of residents, it’s clear that the founders’ vision of Henderson House was realized.

In the 1990s, reflecting on her time at Henderson House just after World War II, Trudi Baumberger Lewis recalled that “we were all serious about our education and willing to work for it … The decision to live at HH was probably the best decision I made in college.”

And in 1997, an anonymous resident responded to a house survey in just the same vein: “Financially it has been affordable, but most of all I learned skills I can carry with me the rest of my life.”