A little harsh against Michigan? 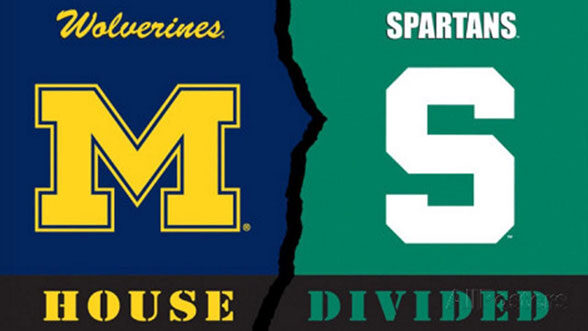 History, honesty, and a little humility

This month Heritage writer James Tobin, a three-time U-M alumnus with a PhD in history, delivered a story that one reader felt did not belong in a U-M publication.

What’s in a name? chronicled a battle in 1954-55 between the powers that be at U-M and those at MSU. The issue? Changing Michigan State’s name from “College” to “University.”

Tobin’s article was inspired by an alum from yet another university, Notre Dame. David J. Young authored the book The Student and His Professor: John Hannah, Ralph Aigler and the Origin of the Michigan State-Michigan Rivalry (2015).

What do you think about Michigan Today’s role in telling the University’s story?
Young shows how Bonisteel and other Regents directed U-M President Harlan Hatcher to wage a campaign against the name change. Prominent alumni were alerted, as were U-M’s allies in the state legislature. Professors in the Law School were enlisted to draft legal arguments, including Aigler, who had spotted Hannah’s talents years earlier, when he was briefly a law student at U-M.

Some 60 years after the fact, the arguments by U-M leaders to “protect the name of the University of Michigan as such” come off  as hollow, petty, and pointless. And one Michigan Today reader took Tobin to task for casting his beloved alma mater in a less-than-flattering light.

“This piece seems a little harsh against Michigan to be arriving in my alumni newsletter,” stated the 2009 grad.

Tobin was quick to respond: “Speaking just for myself — and I’m the middle member of three generations of proud U-M alums — I think we do more for Michigan by considering its history honestly, and with a little humility, than by pretending it’s never done anything wrong.”

For his part, Notre Dame’s Young was pleased to see his book showcased in Michigan Today: “You did a wonderful job summarizing a fascinating chapter in the relationship between the two great state universities.”