The emblems of devotion 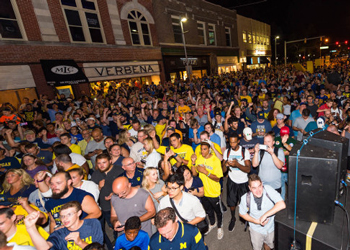 I ask myself, in the streets of Ann Arbor, how a visitor from another planet — an intelligent Martian, let’s say — might describe the human animal.

A portrait goes something like this: The creature walks upright. It has two feet and a prehensile thumb. Locomotion appears to be powered by a cloth hump across the back and one hand pressed to the side of the face. Wires protrude from an ear.

Backpacks and the cellphone are omnipresent, seemingly, as are the cap, T-shirt, sweatshirt, and pants incised with telltale markings. These may be situated on the upper torso or legs. Often, the pattern is repeated both on the body and head. The garments are bright yellow and dark blue. In a majority of cases, the letter M (sometimes accompanied by images of Wolverines or balls) adorns the male and female of the species. These are multi-colored, short or tall, plump or slender, rapid or slow, young or old. When more than a hundred thousand of such figures gather in a stadium — as they do on many Saturdays — they shout in unison and jump up and down. Their progeny do too.

I have described this tongue-in-cheek, but the emblems of devotion are correct. We identify ourselves to strangers by the legend: U of M. Lately, moreover, I’ve been on the road and on distant shores. It’s as though Ann Arborites have spread their signature clothing everywhere. You cannot walk through cities or along a beach or mountain trail in some other hemisphere without some such encounter. Whether in Nepal, Hong Kong, or Singapore, you’ll see the same waved flag. In the desert in Namibia (about as far from Michigan as one can travel on this earth) I saw men and women wearing T-shirts proclaiming their loyalty to the Wolverines. Whether or not they had ever been to or even heard of the school, they have been “branded” as loyalists. 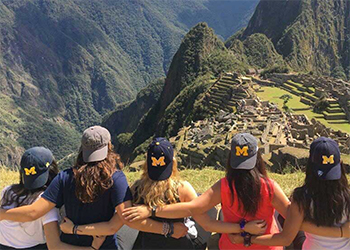 Nearer to hand, the same thing. On a Fifth Avenue bus in Manhattan, the large man across the aisle, working on his laptop, was wearing a Michigan T-shirt; on the rainswept Dingle Peninsula in Ireland, the woman emerging from a car was wearing a parka inscribed U of M. It’s so widespread a sighting as to be commonplace.

On the Ringstrasse in Vienna, in a spice market in Arles, in Prague or York or Havana or Berlin — to each of which I’ve traveled in the last few years — I’ve come face to face with merchandise that confers kinship on strangers. We distinguish present or past members of our not-so-secret society by the colors maize and blue. It’s signage, a symbol, an elective affinity asserting itself: We belong to one tribe.

There’s comfort in this, I believe, that has roots in ancient ways. In The Odyssey or The Mahabharata, a voyager on arrival announces his or her lineage. The laws of hospitality require that we make a stranger welcome, declaring “Friend,” not “Foe.” In a world so often filled with threats, it’s doubly a comfort, somehow, to identify a stranger as an ally who walks where you have walked. Some may come by their Michigan paraphernalia in a thrift shop or shipment of donated clothing, but kinship is established nevertheless. 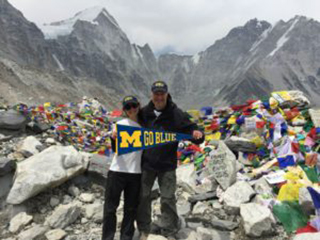 In a formal sense, the Alumni Association ratifies identity with its organized events around the country and world. And “networking” is, of course, a time-honored component of community: shared loyalty proclaimed. But I’m talking about the accidental encounter, the sudden meeting in a crowded street or restaurant, the fact that your neighbor on a train or ferry or plane has chosen a shirt or hat you, yourself, once wore, or possibly are wearing even as you introduce yourself. If you have time to stop and chat, you start by saying: “Go blue!”

After that, it’s shorthand: What class were you? What did you study? Do you remember X or Y? Whatever happened to Z? My imagined Martian would not know, of course, how to translate such discourse but would recognize the kinship established by insignia: a scarf, a book-bag, a ring. If “clothes make the man,” as we’ve been told, then the MICHIGAN decal or ski cap is a form of fingerprinting: This is who I am. 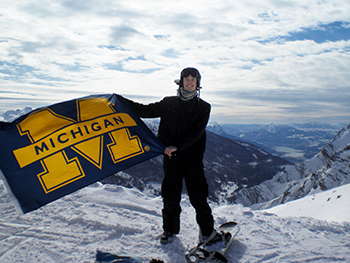 Not everyone who sports the colors is an actual alum. In Namibia, I learned to leave my clothes behind (as well as ball point pens and medicines), when bidding farewell to the folks on the farm where I stayed. So those old men and women who camped by the side of the road in the scrub may well have been wearing some previous visitor’s gift. It’s a way of spreading both image and word, a “Kilroy was Here” on a far-distant wall, and the faded maize and blue in that otherworldly place was a reminder of a world elsewhere. In Southwest Africa, near the Skeleton Coast, while drinking Orangina under a relentless sun, I was transported — by the sight of a Michigan T-shirt — back to the Diag here at home.

Coming back just now from France, my wife and I stood on the re-entry line at New York’s Kennedy Airport. As every traveler knows, this can be a tedious, slow-moving procedure, and we’d been in the air for hours and were weary. Other passengers were being closely questioned, checked and double-checked; it seemed as though the security level had been raised to “High.”

When finally we moved to the head of the line and showed our passports to the customs inspector, he scrutinized the address and said, “Ann Arbor, right?”

And with no further questions, he stamped the documents. “Go blue!” he said and waved us through with a smile.


Where’s the most unusual place you’ve encountered Michigan gear? Tell us in the comments section below.