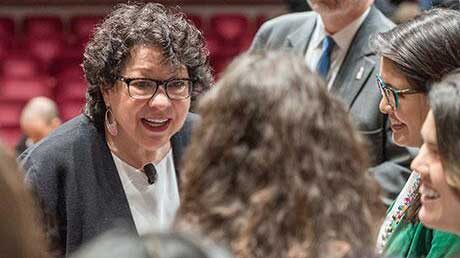 Much work to be done 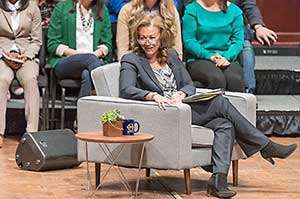 At the first President’s Bicentennial Colloquium, U.S. Justice Sonia Sotomayor and German Justice Susanne Baer, LLM ’93, discussed how respect and compromise can create and strengthen community, stressed the importance of developing diversity in higher education, and urged students to understand the law.

Sotomayor and Baer were the featured guests of the first bicentennial colloquium hosted by President Mark Schlissel, titled “The Future University Community.”

Sotomayor became the first Latina justice on the Supreme Court in 2009, and Baer was the first out lesbian and the first scholar known as a radical feminist elected to the Federal Constitutional Court of Germany.

An openness to listen

Speaking first about the role of universities in helping the United States understand and embrace the concept of a larger community instead of splintering off into segments, Sotomayor recalled her own experiences to demonstrate the need for respect in order to bridge difference.

View highlights of Jan. 30 events.
“I realize that my colleagues, every one of them, is passionate as much as I am about the same things I am,” Sotomayor said. “They love this country, we all love the Constitution, and we revere our system of government. We differ on what the right answers might be to promote those institutions, but in our hearts we have the same fundamental love.

“You can listen more if you start from a place of respect rather than derision,” she continued. “I think that that is what we need to start from: respect and an openness to listen.”

A willingness to compromise 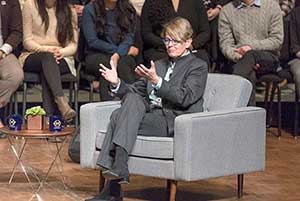 Touching on how she felt when she first sat on the Federal Constitutional Court of Germany, Baer said community is built on the willingness to compromise.

“It’s about being there, standing your ground, being forceful with arguments,” but being willing to respect the other as a legitimate voice, Baer said.

Before the justices’ discussion, Sotomayor received an honorary Doctor of Laws degree from U-M. Baer and Norris had received honorary degrees from U-M in 2014 and 2013, respectively.

In his opening remarks, Schlissel invited everyone to consider that the idea of community has undergone great change during U-M’s first two centuries. He said many of those changes were embedded in the U.S. Constitution, such as the addition of amendments that prohibited slavery and expanded voting rights.

“Our community would look very different without these treasured amendments,” Schlissel said. “It would also look different without the broad representation among our faculty, students, and staff of talented, hard-working community members from all around the globe who make Michigan — the university and the state — such a rich and diverse place to work and to live.”

Schlissel said he hopes the future U-M community will be one of greater experimentation, discovery, diversity, and societal impact, where everyone has the opportunity to contribute and to succeed. 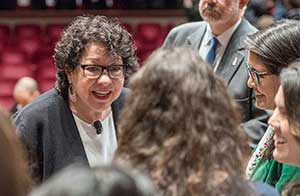 Both Baer and Sotomayor spoke about how they had to navigate unknown waters when attending institutions of higher learning.

As a first-generation college student at Princeton University, Sotomayor said she spent her first year in the Ivy League with her “head in the books,” trying to figure out how to be a college student. More importantly, Sotomayor added, she spent time talking to classmates who were completely different from herself. Putting oneself in uncomfortable situations is necessary to grow, she said.

“Each of those conversations were ones where I was trying to understand that environment that was so alien to me,” Sotomayor said. “And I think that discomfort made me more willing to go out and befriend people who were different, and continues in my life today.”

In another example from her career, she said although she has no children, she understood the late Justice Antonin Scalia’s devotion to his large family, similar to her own mother’s love.

“That is what you have here, the opportunity to experience things that are different from what you know,” she continued. “And if you can take full advantage of that, then you will have gotten the best of education.”

When Baer attended the U-M Law School, she said she was afraid of being called on by instructors, and experienced the dual challenge of being an international student in a U.S. institution and not revealing her sexuality to her classmates.

Baer urged students never to run away from life’s challenges. Instead, she said, they should keep moving forward and create their next opportunity.

Tying in to the colloquium’s theme about the future university community, both justices emphasized the importance of granting everyone, regardless of background, access to education.

Answering a question about what a modern, public university would look like decades from now and what it needs to thrive and remain inclusive, innovative, and a leader of society, Sotomayor said it’s going to look a lot like U-M, to a round of applause.

Trump presidency: U-M experts comment on a variety of topics.
“We are making large improvements toward that kind of equality but we’re still far from it,” Sotomayor continued. “When you look at the number of African-Americans at the University of Michigan, there’s a real problem there. And why is diversity important? For me I think the answer is quite simple: It’s because until you reach that equality in education, we can’t reach equality in the larger society. It starts here and it ends here.”

Referencing U-M’s top-ranked programs, Sotomayor said the University has a handle on what makes the quality of curricula important, but it still needs to figure out how to engage everyone in receiving that quality of education.

In the past year-and-a-half, the University has rolled out several new initiatives to tackle the problem Sotomayor addressed. In fall 2015, President Mark Schlissel announced the Wolverine Pathways program to help create a pipeline to U-M for students in the Ypsilanti and Southfield school districts. That was followed a year later with the HAIL Scholarship initiative, which also created opportunities for low-income students from Michigan. And in October 2016, the University rolled out a five-year, $85-million strategic plan for diversity, equity, and inclusion.

Meanwhile, Baer said the “wider the doors” are for places like universities, the better the places will be. She said she thinks the access points are still “depressingly” shaped by class.

It’s critical that these places and communities stay open to everyone from around the world, she added.

Toward the end of their discussion, before answering students’ questions, both justices stressed the importance of being active citizens and understanding the law.

“Protecting the interests of our international community of scholars” –President Mark. S. Schlissel, Jan. 28, 2017
Sotomayor urged guests to pay attention to what’s not written — like the right to an education — when reading the Constitution.

“Laws regulate your very existence and virtually every relationship you have and if something’s that important, you should at least understand its basic operation in the community you live in,” Sotomayor said. “I do ask you to be informed citizens. You can’t really improve the world you’re in unless you understand how it functions.”

Baer told guests the law was theirs; she recommended adding the Universal Declaration of Human Rights and subsequent conventions, such as the international conventions on the eliminations of racial discrimination and discrimination against women, to their reading lists.

These documents are not only for lawyers, she said. They can be used to activate and mobilize people around American principles and concepts. They serve as “the common ground we all agree to live up to — those ideals and promises to be fulfilled.”

This story originally appeared in The University Record, the official source for faculty-staff news at the University of Michigan. 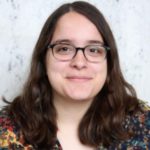 SAFIYA MERCHANT is a staff writer for The University Record, the official source for faculty-staff news at the University of Michigan. Prior to joining U-M, Merchant was a reporter for the Battle Creek Enquirer and the Daily Herald Media Group. She also has written for The Seattle Times and the Chicago Sun-Times.
Social
Share on: Share on Twitter Share on Facebook