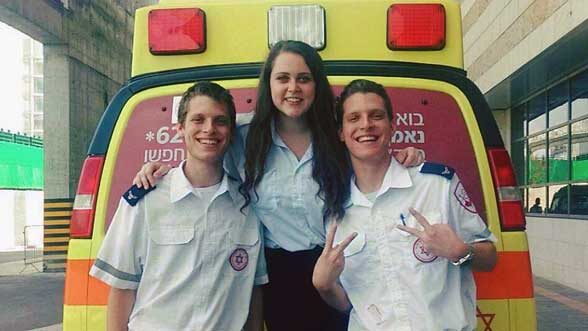 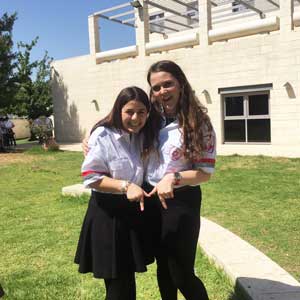 Wearing MDA uniforms, Dalia Gatoff and Jesse Adler flash a Block M for their friends at home. (Courtesy of Gatoff.)

Sometimes the impact that University of Michigan students have on the world can be measured right on campus. Other times, that impact can be seen – and felt – in an ambulance halfway across the world.

Training to be a first responder in a medical emergency is an intense and demanding experience under any circumstances. But for a team of Wolverines volunteering in Israel last summer, it was especially challenging.

U-M students Dalia Gatoff, Jesse Adler, and Ali Trachtenberg (class of 2019); Danielle Baratz (class of 2018); and 2015 alumnus Daniel Cole had no real medical experience when they landed in Israel for a six-week training program at Magen David Adom (MDA).

But that’s the point.

MDA is the nation’s emergency medical, disaster-relief, and ambulance service. It also is Israel’s blood bank and affiliate to the International Red Cross. Founded in 1930 by a group of doctors operating out of a one-room hut, MDA has since grown into Israel’s largest non-governmental organization, treating some 600,000 sick and injured Israelis annually.

“We like using college students because they usually have the right mix of having a passion and a desire to learn, while also being knowledgeable and capable enough to carry out the responsibilities given to them,” says Haron Kababie, the director of MDA’s Overseas Program.

Among the class of MDA volunteers last summer, 71 were American. Of those, seven were connected to U-M.

“Before I started the program, I had no idea what I was doing,” says Adler, an undergraduate student in neuroscience. “I wasn’t sure if I was even qualified to be a volunteer first responder.”

The MDA volunteer training kicks off with 10 days of first-aid and EMS instruction and testing. A 12-hour day is typical, as the students learn and apply key concepts from bandaging simple wounds to administering CPR to managing mass-casualty incidents. Next, volunteers take written and practical exams to qualify for an ambulance unit. They also must become fluent with a list of 250 medical terms in Hebrew.

“It’s really unique because a lot of places won’t train you as a first responder in 10 days and then let you go ride in an ambulance for several weeks,” says Gatoff. “But Israel is really trusting with young people and with people with little experience.”

“It was a new experience for me, but I just tried to stay calm.” — Danielle Baratz
Volunteers log five weeks as a member of an MDA ambulance team in one of seven cities. They work eight-hour shifts, five days a week, and are usually paired with a driver. Sometimes they partner with another staff member riding in the back of the ambulance.

For the majority of calls, volunteers are assisting the elderly, transporting patients, and recording a patient’s vitals and blood pressure. But now and then volunteers will find themselves in more extreme situations.

“I was called for a stabbing and have had to assist with stroke patients,” says Baratz. “One time I was called to treat a patient, and as I was treating him, he was about to go into cardiac arrest. I had a little jump in my nerves, as it was a new experience for me, but I just tried to stay calm.” 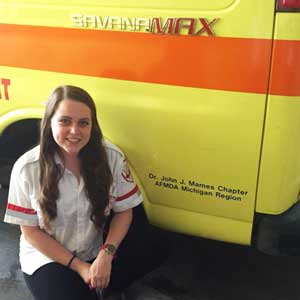 Jesse Adler with a vehicle funded by the American Friends of Magen David Adom (AFMDA) Michigan Region. (Courtesy of Adler.)

For some volunteers, the experience serves as an opportunity to give back to the community. For others, the MDA program offers more than 200 hours of real experience that can be applied toward medical school or other options in health care. The organization has pioneered techniques and protocols now being used worldwide, including in the immediate aftermath of the 2013 Boston Marathon bombing.

Baratz, the daughter of Israeli parents, says she has long wanted to contribute to the country and briefly considered joining the Israeli army. After hearing about Magen David Adom through friends and others, she decided to apply. The experience helped clarify her academic and professional goals as she pursues a pre-dental curriculum with a major in middle-eastern studies and a minor in women studies.

“Coming into college I just figured I would do dentistry because my dad is a dentist,” Baratz says. “But I really wanted to make that decision my own. I did the program to see if dentistry would be the right path for me.”

Gatoff particularly enjoyed the experience of being able to work with and treat people of different backgrounds.

“We helped everyone,” she says. “We helped Jews, we helped Arabs, and we helped Christians. As an organization, MDA treats terrorists and transports them to the hospital when the situation calls for it.

“Also, I was expecting everyone in the program to be Jewish, and it totally wasn’t the case,” she says. “There were volunteers from all over the world, and so it was interesting to see people from different backgrounds drawn to committing their time toward helping the community in Israel.”

MDA’s Kababie says the organization doesn’t go out of its way to advertise or market the volunteer program outside Israel. Aspiring first responders, from as far away as Ann Arbor, tend to learn about the program through word-of-mouth.

“The students from Michigan usually are responsible volunteers, and I guess they’ve enjoyed the program well enough to suggest and encourage their friends to volunteer,” he says.

Cole, a current medical student at Wayne State University, took his volunteerism beyond the parameters of the six-week program. He logged about three months in an MDA ambulance developing skills and expertise that now inform his studies.

“It’s a comfort having that experience, dealing with patients in those stressful situations,” Cole says.

For all five students, the experience outperformed their expectations.

“I thought it was an incredible, eye-opening experience,” Adler says. “You have to be able to give up yourself and want to help people. I’m lucky to have been able to do it.”