Not your father's time capsule 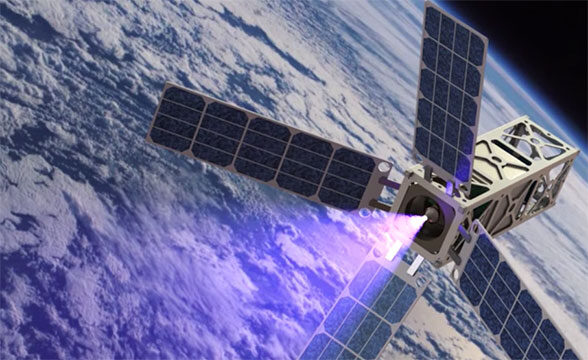 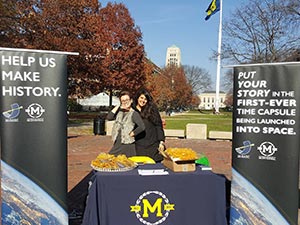 Under the mantle of the University of Michigan’s Bicentennial, a team of students plans to launch a small satellite called a CubeSat containing interviews from 1,000 members of the U-M community and an experiment to test synthetic DNA as a medium for storing data in space.

Their goal is to build a satellite that can orbit Earth for 100 years. It will be the first U-M CubeSat built with a propulsion system.

The Michigan Bicentennial Archive, or M-BARC, team believes that time capsules should not be left buried in the ground.

“Like history itself, a time capsule should be alive, a thing of power and will,” reads the group’s website. “It should wrestle against the laws of nature and, in turn, its recipients must do the same.”

“Like history itself, a time capsule should be alive, a thing of power and will. It should wrestle against the laws of nature and, in turn, its recipients must do the same.”
Satellites are exposed to radiation, which is a key issue the team has to overcome in order to store 1,000 interviews in space. Radiation wreaks havoc on digital data, flipping their bits. Physically printed data like CDs are safe, but they’d be too big for this application. So the team is working with the U-M Lurie Nanofabrication Facility to nanoprint 8-to-30 GB of data on a 1-inch silicon chip. At least 10 chips will be placed at different orientations in the satellite to provide backups.

Radiation also plays an important role in the team’s DNA experiment, which tests the genetic code’s ability to store information in space. One microgram of DNA can hold 900 terabytes of data. That’s about 11,000 iPhones. The team had tried to encode the Michigan fight song into the DNA but according to Christopher Twilling, team lead of sequencing, because “the fight song is redundant within itself, it read like cancer to the DNA.” Instead, they are encoding U-M’s mission statement.

Future U-M scientists can see how well the synthetic DNA holds up.

“They’ll know exactly what the sequence should be. When we get the satellite back, we can see how messed up it is after 100 years,” says faculty lead Aaron Ridley, a professor in the Department of Climate and Space Sciences and Engineering.

As if those challenges weren’t enough . . . 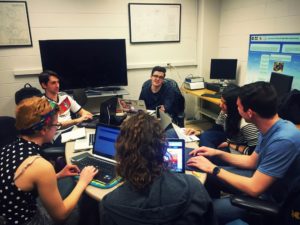 The craft will also need to stay in Earth’s orbit for a century. To do that, it needs a propulsion system. Without one, its orbit would start to decay from the moment it launched. It wouldn’t last 20 years, let alone 100.

“Small satellites typically don’t have propulsion. There’s just not room for a lot of fuel,” says Riley, who noted that the team is currently comparing electric and chemical thruster systems for use in their CubeSat.

The original idea for M-BARC was to send the time capsule to the moon, an idea proposed by Thomas Zurbuchen, a former U-M planetary science professor who is now head of NASA’s Science Mission Directorate.

“It’s probably why it was so appealing to the engineering students — it was achievable,” says Kevin Tebbe, who recently graduated with a master’s degree in aerospace engineering and was the student lead on the team and one of five founding members who worked on feasibility studies.

As the team grew to 30 students across 20 majors as part of Michigan Engineering’s Multidisciplinary Design Program, ambitions for the project grew. They took on the bigger challenge of designing the satellite and orbit pattern themselves, in addition to the ISR-approved DNA experiment and the capture and encoding of 1,000 interviews.

Finishing all of them in concert over the next two years requires the continued, persistent progress from students in engineering, science, and liberal arts, as well as the expertise of faculty, staff, and scientists across the globe.

Which U-M mementos would you place in a time/space capsule?
The team expects construction of at least the payload portion of the CubeSat to begin in the middle of the winter 2017 semester. The payload includes the DNA experiment and data chips containing interviews.

M-BARC actually will launch two satellites. The first, expected in late 2017, is a test satellite, about a third of the size of the eventual CubeSat. The students recently were selected by United Launch Alliance as one of four university teams to hitch a ride on an upcoming launch for free. While the U-M students work on the satellite design, they are leaving the fabrication in the hands of Ypsilanti high school students at STEM Middle College, home of a highly competitive FIRST Robotics program.

Ultimately, in the next century, U-M hopes to retrieve the time-capsule by using a laser to find the satellite’s built-in reflectors.