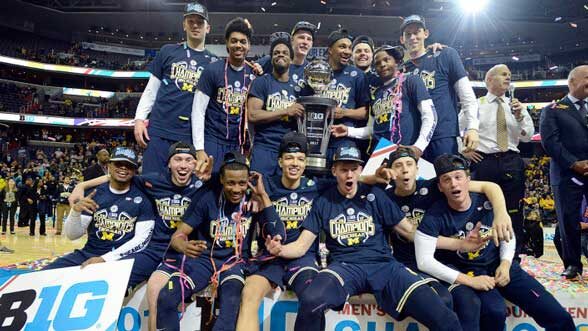 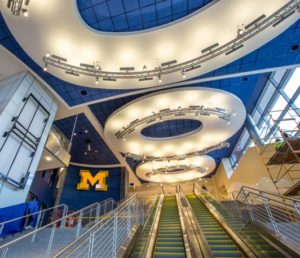 After the Wolverines’ home finale this year, a U-M assistant coach led a couple of basketball recruits on a tour of the Crisler Center, stopping to snap photos along the glittering concourse.

A two-story waterfall in front of a block M made for a striking picture in the atrium. The tour showcased a play space for kids, several interactive video boards, and a Hall of Honor, complete with trophies and memorabilia.

The arena bore little resemblance to Crisler’s much-maligned (and beloved) predecessor, Yost Field House, though the touring recruits couldn’t know that. The field house was built in 1923 and named for Fielding H. Yost, Michigan’s longtime football coach (1901-24) and director of intercollegiate athletics (1921-41). The original site, “in reality a building erected over an immense playing field,” featured a removable basketball court over a dirt surface. Track & field competed there, and the baseball and football teams practiced at Yost during winter weather. Men’s basketball called it home until 1967.

By the early ’60s, the overworked facility had fallen into disrepair. It was plagued with overcrowding and safety issues, not to mention the occasional pigeon overhead. So, in 1963, when a young hoops sensation named Cazzie Russell from Chicago’s South Side first visited U-M, the coaches avoided Yost Field House altogether.

“I kept seeing this hesitation,” Russell said at the 2013 rededication ceremony of Crisler Center, according to The Wolverine. “Don Canham [the track coach who would soon become athletic director] is searching in his pocket, and all of a sudden he tells me he has either lost or left the keys somewhere . . . Instead, they took me to the Big House, to the luxury box, where we had lunch overlooking Ann Arbor. I figured everything was just like that. You can imagine what I felt when I came back in the fall, and I finally saw Yost: bats flying in the rafters.”

These days Michigan’s home court is proudly front and center. When Russell returned to campus last November, he was in awe of what the building has become. “To see the fruition of this . . . all I can do is thank God for this gift,” he said.

Longtime basketball fan Al Storey, BA ’49/MA ’50/PhD ’53, has held men’s basketball season tickets since 1949, the year he and his wife got married. He gave up the tickets this year, and at 96, he’s just now getting used to the idea of basketball on television. If Crisler’s walls could talk, they might sound like Al Storey.

Champions! Michigan grabs 2017 Big Ten Tournament title.
After watching Russell (No. 33) and teammate Bill Buntin (No. 22) — both of whom have had their jerseys retired — light up Yost, the Storeys saw Phil Hubbard (No. 35) lead the Wolverines to a championship appearance in 1976 and Glen Rice (No. 41) take advantage of the recently adopted three-point line to help the program capture its lone national title in 1989. The Fab Five stormed through next, and Storey became an instant fan of Jalen Rose. “You began to realize he was the captain on the floor.”

Any men’s player who was on the 2014 Big Ten championship team points to the win over Indiana in the regular season finale as a top moment at Crisler: “It really can’t get much better than that,” says U-M senior Zak Irvin, a freshman on that team. “The confetti coming down, having the trophy, cutting down the nets: That’s a memory I’ll never forget.” 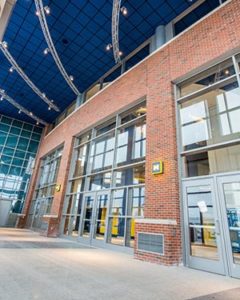 Not everyone was impressed.

Writing for The Michigan Daily, Clark Norton, BA ’68, referred to the arena as U-M’s version of the Houston Astrodome. He cited rumors of shower stalls too short for many players and faucets that failed to produce hot water.

“Perhaps in order to make the transition less painful from lovable old Yost to the sparkling new stadium,” Norton wrote, “a leak developed in the roof, requiring that a plastic tarpaulin be placed over several rows of plush gold seats.”

Forgive the young journalist for his disappointment. Sports arenas are, more than anything else, about memories. For Norton, this “sterile” new Events Building had none.

Fifty years later, there are plenty.

The idea for a new basketball facility was first expressed, at least publicly, in 1946. In its annual report to the University Regents, the Board in Control of Intercollegiate Athletics noted that rising student enrollment and a growing Ann Arbor population had rendered the school’s sports facilities — namely Yost Field House and the Coliseum, hockey’s home — “utterly inadequate.” The board recommended the administration build two new structures, and get started “at the earliest possible time.”

Share your memories of “the house that Cazzie built” in the comments section below.
University officials must have been busy with more demanding priorities, because they did not produce a plan until May 1963. They did give thought to a building that housed both basketball and hockey, but it was deemed more expensive than a basketball-only facility. (The hockey team would move into a renovated and renamed Yost Ice Arena in 1973.)

“We could probably afford to build a large multi-purpose building if we could raise revenue through bringing in rodeos, ice follies, and this type of thing,” Stephen Burr, a University dean, told the Daily at the time. “But then the structure would become a monument to professionalism, and that’s not what we’re trying to do. What we want is a facility for strictly student athletics.”

To help raise money for the project, students paid $12 for season football tickets, up from $1 the previous year.

In October 1964, the Regents approved a $4.9-million plan for the University Events Building. Ground broke on Sept. 18, 1965. As is often the case with large-scale construction projects, the estimated completion date was pushed back more than once, and the cost grew over time. The final price tag would reach $7.2 million.

If you build it… 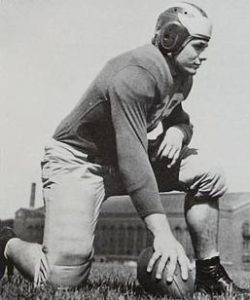 Fritz Crisler, U-M’s head football coach from 1938-47 and athletic director from 1941-68, recommended one of his former players as the architect for the new arena. Los Angeles-based Dan Dworsky, B.Arch., ’50, a member of the undefeated national championship team in 1947, was thrilled to get the job. (Dworsky and his firm’s credits include the Tom Bradley International Terminal at Los Angeles International Airport, the L.A. branch of the Federal Reserve Bank, and the Beverly Hills, Calif., main post office, among others.)

Dworsky researched the recently constructed Pauley Pavilion, still the home of UCLA basketball, as inspiration for what would become Crisler. He designed a clear span structure with no interior columns. Unlike Pauley Pavilion, however, Dworsky’s design featured a roof supported by steel trusses. It could expand or contract with Michigan’s extreme temperatures and heavy snowfall.

At 107 feet tall, the building sat 13,684 people. Every seat had an unobstructed view of the court. Some of the lower-level seats could retract to make room for a second basketball court. When it was game time, “The use of indirect lighting combined with recessed incandescent fixtures produce(d) an exciting, dramatic atmosphere,” according to the program visitors received at the arena’s opening.

Fans nicknamed the Events Building “the house that Cazzie built,” owing to the large crowds the star player drew from 1963-66. Michigan won the Big Ten in all three of Russell’s seasons and went to the Final Four twice, starting a wave of basketball mania that demanded an upgrade to facilities.

Russell never played a college game in his “house,” however. He was a first-round NBA draft pick in 1966, joining the New York Knicks by the time the Wolverines welcomed Adolph Rupp’s powerful Kentucky squad the following year. Michigan lost that game 96-79, despite a triple-double from Rudy Tomjanovich: 17 points, 10 blocks, and 27 rebounds, still the most ever in the building. Tomjanovich’s No. 45 is now retired and hangs in Crisler’s rafters.

In 1969 the Events Building was renamed Crisler Arena. When women’s basketball became a varsity sport in 1973, the team moved in. Before the opening of what is now called Cliff Keen Arena, the men’s gymnastics and wrestling teams also claimed Crisler; women’s gymnastics still does. Crisler hosted the 2014 men’s gymnastics national championship, won by Michigan, and, last December, NCAA tournament games in volleyball. The arena has hosted tennis exhibitions as well, including one featuring Arthur Ashe in 1968. 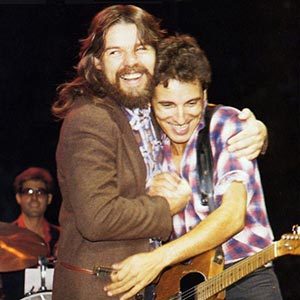 Springsteen fans saw an early version of tunes from “The River” at Crisler — and got a treat when Detroit’s Bob Seger jumped on stage. (brucebase.wikispaces.com)

While it’s tough to track down any records of rodeos or ice follies, plenty of non-sporting events have come through Crisler’s doors.

The John Sinclair Freedom Rally in 1971 (to support the poet and political activist who was sentenced to 10 years in prison for possession of two marijuana cigarettes) featured musical performances from John Lennon and Yoko Ono, Stevie Wonder, and Bob Seger. More than 15,000 people packed Crisler that night. Among other headliners in the ’70s: Aerosmith, Earth, Wind & Fire, the Eagles, Billy Joel, and Bob Dylan, shortly after the release of his album Planet Waves.

According to The Ann Arbor News, during his 1977 show, Elvis Presley inspired “hordes of screaming, crazed women” to rush down the aisles to catch the scarves he tossed into the crowd. “Although some of the ushers tried to stop the charging fans, they were soon outnumbered and quickly brushed aside.”

Gerald Ford, BA ’35, held a presidential rally in September 1976. “I’d rather run against Jimmy Carter than Harlan Huckleby any day of the week,” Ford said, according to the Daily, referencing the Democratic candidate and the Wolverines’ star running back at the time. “While many parts of Ford’s speech drew lusty boos, the catcalls were frequently drowned out by the applause reminiscent of football Saturdays,” the Daily reported. The biggest uproar occurred when a firecracker exploded in the stands.

Bruce Springsteen swung through in 1980, a couple of weeks before The River came out. Springsteen and the E Street Band were “a bit rough and ragged throughout the show,” claimed the Daily’s review, but the Boss still wowed the crowd. 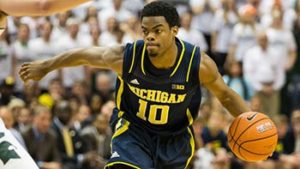 In 2012, the University completed a $72-million renovation to the renamed Crisler Center, adding 63,000 square feet to the facility. The project addressed infrastructure needs; expanded the concourse, concessions, and retail areas; upgraded the lower bowl seats; and added handrails to the aisles, among many other improvements. Today Crisler Center has a capacity of 12,707.

After the renovations, U-M men’s basketball coach John Beilein admitted on a radio show that he had previously joked with a University administrator about blowing up Crisler and building a new arena from scratch. But Crisler’s bones were solid; the facelift made it modern.