Everybody walk the dinosaur 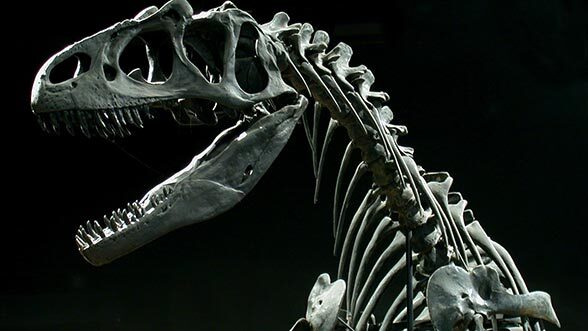 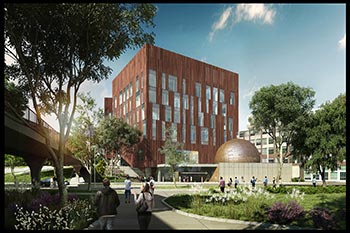 Innovation is nothing new at U-M’s Museum of Natural History (UMMNH).

As early as 1841, the University broke with precedent by inviting the general populace to view exhibits in its “Cabinet of Natural History.” With that simple move, the first public museum in Michigan opened its doors.

Entertaining “civilians” was an uncommon notion at the time. Whether it housed works of art, artifacts or specimens, a museum’s original function had been to assemble and manage materials reserved solely for the use of private collectors and scholars. Today, U-M’s herbarium and its museums of anthropological archaeology, paleontology, and zoology continue to serve this critical research function. But a museum’s public function — to engage the average citizen in scientific discovery — is just as critical, says Amy Harris, UMMNH director.

“We want people to experience doing the kinds of things that scientists do,” Harris says of a future museum that will draw visitors into the scientific enterprise. “Our new opportunity is to talk about the process of science and to engage with some of the people who are doing that work.”

So in the spirit of 1841, U-M is reimagining and relocating the UMMNH from its home in the historic Alexander G. Ruthven Museums Building to the nearby Biological Science Building (BSB). The building is under construction; it sits on the site once occupied by North Hall and the Museums Annex, and is adjacent to the Life Sciences Institute. The BSB will open for classes in fall 2018, at which point the museum will begin a three-stage, yearlong rollout of exhibits. The full complement of galleries and program spaces will open to the public by fall 2019.

Museum Memories
“Whether you came with your grandparents, on a school field trip, or you first discovered the Museum as a U-M student, we want to hear about it,” says Amy Harris, UMMNH director. “We want to discover the many ways the UMMNH has impacted lives.”

Future UMMNH visitors will travel a winding path through the modern structure, passing galleries, labs, and exhibits. In some cases, they also may be able to observe and interact with working scientists. So instead of just viewing a dinosaur skeleton, one might have the chance to ask a paleontologist about the process of preparing bones for study or display. And museum faculty, graduate students, and postdocs will be prepared to answer in a way that best connects with curious visitors. An ongoing Science Communication Fellows program is designed to help them articulate the wonders of their work to a general audience.

“There aren’t many opportunities for the public to engage with university research, so whenever we can create experiences where people are doing something, we feel we’re on a better track than something that’s more passive,” Harris says.

“We’ll still have the hallmarks of a natural history museum,” she continues, “with specimens and artifacts on display, but we’re going to be in an active research building.”

Staying true to the mission 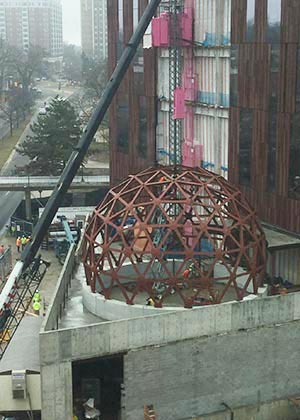 Lynne Friman, project manager for UMMNH and the College of Literature, Science, and the Arts (LSA), is a self-described museum gypsy and change agent. She oversaw the Detroit Institute of Arts’ re-installation project and the building of the IMAX wing at The Henry Ford. She also was project manager for the U-M Museum of Art’s renovation and installation.

Learning styles, however, can be different. So designers solicited and considered public feedback as they conceptualized the new site and its interactive functionality. This process also has roots in UMMNH history. In 1933, in one of the earliest forms of a visitors’ study, Crystal Thompson, curator of the Department of Visual Education (as the museum was called then), obtained funding from the Carnegie Corporation. She sought to study the ways in which museum exhibits educate general audiences about science. That information must have been very helpful when, in 1956, the UMMNH became a freestanding unit within LSA, rather than a department of the research museums.

Incorporating new technologies and teaching techniques has always been the name of the game, says Harris. “We recently worked with a neurologist who figured out how to project real brain scans on a planetarium screen. Now we can take people on a tour of the brain.”

Out with the old

Meanwhile, back in the Ruthven Museums Building, the challenges of the move itself are top of mind. The UMMNH is home to about 3,750 artifacts and specimens, whose survival depends on expert handling even in ordinary circumstances. And this transition is anything but ordinary.

U-M’s Museum of Natural History at Ruthven will close to the public following a Dec. 31, 2017, celebration, “Last Night at the Museum.” The full complement of galleries and program spaces at the new site in the Biological Science Building will open to the public by fall 2019.
“We have to think about the materiality of everything we move,” Friman says.

Luckily, there is expertise in the neighborhood, another blessing of propinquity. Due to their own relocation, the research museums at Ruthven have to move materials to the new Research Museums Center on the south side of Ann Arbor.

“There’s a whole group of people who have been trained in moving artifacts and specimens with great care,” Friman says. “We’re learning a lot from them, and we’re going to continue to take advantage of that as we move.”

Next month, experts will begin the process of moving the museum’s giant Edmontosaurus,the skeleton of a duck-billed dinosaur. The rest of the specimens will be removed after the UMMNH closes to the public, following a New Year’s Eve celebration they’re calling the “Last Night at the Museum.”

In with the new 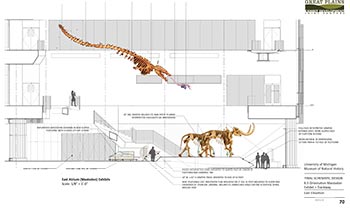 Purists who plan to visit the new site will be pleased to know the same pair of pumas that flank the Ruthven Museums Building today will be posted  at the UMMNH entrance in the BSB’s east atrium. In the new location, the pumas will face one another, as opposed to resting in parallel. Two mastodon skeletons will greet visitors on entry—the only display of a mastodon couple anywhere.

“We will continue to offer experiences in the new museum that are more contemplative,” Harris says. “There will be things to look at and places to sit and take things in a little bit.”

As for Ruthven’s future, it will become home to the University’s central administration following an extensive renovation the Regents approved in December 2016. The Ruthven project also will add 100,000 square feet for learning classrooms, an ideal opportunity to preserve and reuse a landmark campus building. The Fleming Building, built in the early 1960s and current home to the administration, is set for demolition in the next few years.