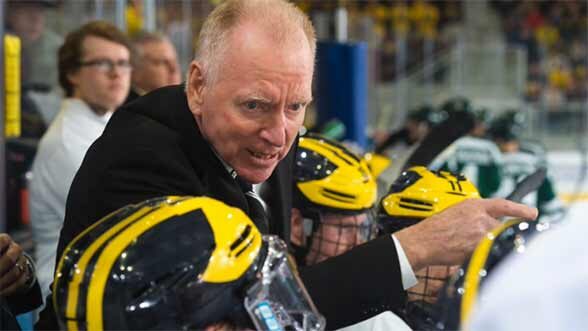 Among the greatest coaches in college hockey history 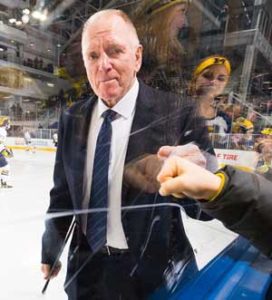 Head coach Red Berenson, BBA ’62/MBA ’66,  announced April 10 that he is retiring after 33 seasons at the helm of the University of Michigan ice hockey program and that he will remain as a special adviser to Warde Manuel, the Donald R. Shepherd Director of Athletics.

“I’ve thought about this for a long time and I think this is the right time and it’s the right thing to do for the Michigan hockey program,” says Berenson. “My heart will always be at Michigan and I look forward to the team taking the next step and making me proud as a former coach.”

Michigan went 848-426-92 (.654) in the Berenson era, including the 1996 and 1998 NCAA national championships — the eighth and ninth in school history. Berenson’s accomplishments behind the bench at Michigan put him among the greatest coaches in college hockey history.

“Red Berenson is a legendary figure at the University of Michigan as well as in our ice hockey history,” says Manuel. “Throughout his career, Red has focused on the academic and athletic success of the young men who have come through our program while shaping the sport as we know it today. He has developed an astounding 73 NHL players but, more importantly, he has positively impacted hundreds of young men. We are forever grateful for his contributions to the University of Michigan and I look forward to continuing working with Red for years to come.”

“I deeply appreciate Coach Berenson’s decades-long commitment to ensuring that our student-athletes succeeded in all aspects of their lives: on the ice, academically, and as citizens and members of our community,” says President Mark Schlissel. “He is an excellent representative of our university, and I will always remember seeing him lead our teams behind the bench in Yost Ice Arena.”

More: “Red Berenson: A life in hockey.”
When Berenson took over a struggling program in 1984, his goal was to return Michigan to its glorious success of the 1950s. Introduced by then-athletic director Don Canham on May 17, 1984 in the M Club Room at the University of Michigan Golf Course, a 44-year old Berenson first hoped to restore the image of the hockey team.

“I’d like to improve the image of the Michigan hockey team on campus and with the alumni,” Berenson said at his opening press conference. “I think that now people will be thinking more highly about the program.”

Berenson has more than banked on his promise, building Michigan into a powerhouse that has spanned over three decades. Under Berenson, the Wolverines have qualified for the NCAA Tournament in 23 of the past 27 seasons. His run of 22 consecutive appearances from 1991-2012 marks the longest streak ever in college hockey. In that time, Michigan reached the NCAA Frozen Four 11 times: back-to-back appearances in 1992 and 1993; four consecutive appearances in 1995, 1996, 1997 and 1998; three consecutive showings between 2001-03; 2008 and 2011. Besides 1996 and 1998, U-M also reached the national title game in 2011, losing 3-2 in overtime to Minnesota-Duluth.

Berenson became the fourth collegiate ice hockey coach to record 800 career victories, reaching the milestone with a 7-5 win vs. Minnesota on Jan. 10, 2015. Berenson’s 848 victories place him fourth on the NCAA ice hockey coaches all-time win list. He stood behind the U-M bench for the 1,000th time of his career on Feb. 22, 2008 at Michigan State.

Video: “Red Berenson: A career retrospective.”
Most recently, Berenson was named 2016 Big Ten Conference Coach of the Year, leading Michigan to a record 36th NCAA Tournament appearance in program history and the 23rd NCAA bid in his tenure at Michigan. U-M finished the 2015-16 season at 25-8-5 (12-5-3-2 Big Ten), as the Wolverines clinched the program’s first Big Ten Tournament title with a 5-3 win over Minnesota.

A three-year varsity letterwinner, Berenson is one of the top players in Michigan hockey history, earning All-America and Michigan Most Valuable Player honors in both his junior and senior seasons (1961, ’62). His 43 goals and nine hat tricks in his last season still stand as Michigan records. Berenson holds a bachelor’s and MBA degree from the Ross School of Business.

He played in the NHL for 17 years as a member of the Montreal Canadiens, New York Rangers, Detroit Red Wings, and St. Louis Blues. He accumulated 261 goals and 397 assists in 987 games — the most career points by any Michigan alumnus in the NHL — leaving an indelible mark on league history. Following his retirement as a player after the 1977-78 season, he served on the coaching staff of the St. Louis Blues and earned the Jack Adams Award as NHL Coach of the Year in 1981.

Following two seasons as an assistant coach on Scotty Bowman’s staff with the Buffalo Sabres, Berenson returned to Ann Arbor, a place he has called home ever since. Berenson remains one of the strongest advocates for the University of Michigan and college hockey.

(This story is reprinted courtesy of mgoblue.com.)