In the late-summer days of September 1954, women students were streaming back to campus. Deborah Bacon, Michigan’s formidable dean of women, was watching. Everywhere she looked—not just in dorms but in classrooms, even in the Administration Building itself—she saw Bermuda shorts. And she did not care for them.

So: No more Bermudas, the dean declared—not in classroom buildings, not in libraries, and certainly not in the Administration Building.

“University buildings such as the Administration Building [later the LSA Building] are business offices and not an undergraduate playground,” she said. “Students should be dressed accordingly in this business center of an international university.” 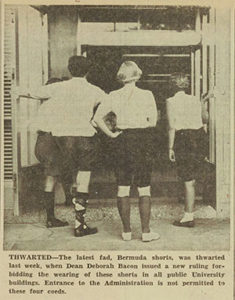 These Bermuda-shorts-clad women were denied admittance to the Administration Building. (See Larger Image, courtesy of the Michigan Daily archive.)

The fever for loose, stylish shorts ascending to three modest inches above the knee had started a couple years earlier. Designers had copied the shorts worn by British officers on the Atlantic outpost of Bermuda during World War II. The fad had sprung up on the elite campuses of the Ivy League, then spread westward toward Michigan.

By the spring of ’54, Bermudas were in full bloom in Ann Arbor—in khaki, solids, and plaids. All the stores were carrying them, from Jacobson’s to the Mademoiselle Shop.

But opinion was split three ways among women, men, and the University’s administration.

In an informal survey, The Michigan Daily discovered that half of all U-M women owned Bermudas.

Many men saw them differently, and felt no reluctance to say why.

“I don’t like ’em,” one man said. “They show off the most unflattering part of any woman’s legs.”

“They don’t show off the advantages shorts do,” another told the Daily, “and yet they don’t have the compact look of jeans or slacks. Girls should stick to dresses.”

Yet men were starting to wear Bermudas themselves. That would bolster the pro-Bermudas contingent if rumors of a ban were confirmed.

When news arrived that women at Michigan State were protesting a Bermudas ban in East Lansing, many at U-M applauded.

“We don’t need bans against them here,” said a senior woman. “We’ve got enough intuition, I hope, to know where they’re permissible and where they’re not.”

That was the question–when and where they were permissible. On this there was some confusion.

“There’s sort of an unwritten ruling here that Bermudas are all right for picnics and bike rides and lounging around the house,” one woman said, “but not for classes.”

“What makes me maddest about Bermudas in general,” a first-year woman said, “is that we’re not supposed to wear them to lunch and supper around the dorm—but it’s perfectly all right to wear jeans and pedal-pushers. It seems to me that mid-thigh is too indefinite a place to draw a line like that.”

With the students’ return to campus the following fall, Dean Bacon was all too happy to draw a line.

Invoking an order that she called “half rule and half tradition,” she declared that any woman who entered a classroom building, a library, the League, the Union, or the Administration Building wearing Bermuda shorts, jeans, slacks, or pedal-pushers was to be sent back to her closet for a skirt or a dress.

Shorts were out for men, too, she said, though the dean of women was clearly more concerned about rules on the distaff side of the student body. 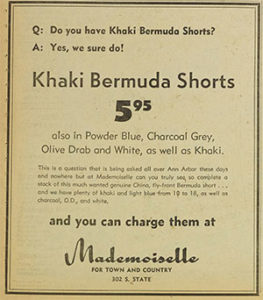 Dean Bacon was not exactly an old-fashioned schoolmarm. She’d been a psychiatric nurse in New York City; an Army nurse with U.S. forces in France during World War II; and she had a PhD in English. Many women students had become devoted to her since she had taken the deanship in 1950.

But she held a stern belief that college students would run amok without a firm parental hand. (See “Dean Bacon’s Demise.”)

“We take the place of the home and church,” she once said, “in a preservative, conservative fashion.”

She was especially suspicious of male students—a suspicion confirmed in 1952 when Michigan men had staged the nation’s first panty raids, only to be shut down by an unflinching Dean Bacon.

Now, her ban on Bermudas stirred protests from women and men alike.

“The University has some nerve trying to exercise their tastes on the student body,” one male said. “If girls feel like wearing shorts instead of skirts they should be able to.”

“Do we have to wear skirts to look dignified?” a woman asked. “I don’t think so.”

“I can see why Bermudas give the wrong impression in the Administration Building, but why in libraries?” said another protester. “I study a lot better when I can relax.”

Two editors of the Daily, tongues only half in cheek, chided the dean by citing the 19th-century philosopher John Stuart Mill, author of On Liberty.

“It is not the function of government (in this case the University) to impose the ethics of one sector of society unwillingly on another sector,” they wrote. “We may assume that the question of propriety involved is not of an ethical or moral nature, but rather a simple matter of opinion. If this is true, then it remains for each coed to decide for herself what constitutes dignity.

“We are one of the few schools that still maintain a driving ban, parties have to be registered, chaperoned and approved to be legal, drinking is illegal—in fact practically everything is illegal. And now, as if that wasn’t enough, they’re telling us what to wear. It looks bad, Mr. Mill.” 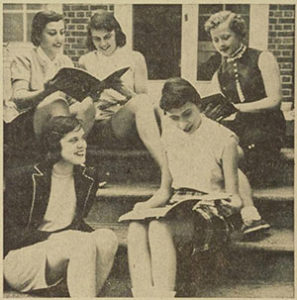 Frederick Wagman, dean of the library system, quickly reassured women they were welcome to wear Bermudas in the libraries—except, of course, in the Law Library, the Business Administration Library, the Clements Library, and the Michigan Historical Collections.

Most women chose to abide by the ban. A certain number—half, remember, said they owned no Bermudas—even took Dean Bacon’s side.

“Let’s face it,” student Tammy Morrison wrote the Daily, “Bermudas are undignified; what’s more, they’re ridiculous. I can’t imagine why people wear them except perhaps as part of that everlasting search for (and I quote) ‘individuality.’”

And in the end, Dean Bacon was a pretty good sport about it.

When students staged their annual “Fortnite” revue on the stage of the Lydia Mendelssohn Theater, the traditional housemothers’ skit featured the dean herself, with her three assistants, all clad in Bermudas with knee socks rolled down to the ankles.

“The response of the audience showed that they really appreciated the satire on authority,” the Daily reported. “They were proud of the Administation for admitting they can see the students’ point of view.”

Sources were found in the Michigan Daily, now searchable online.