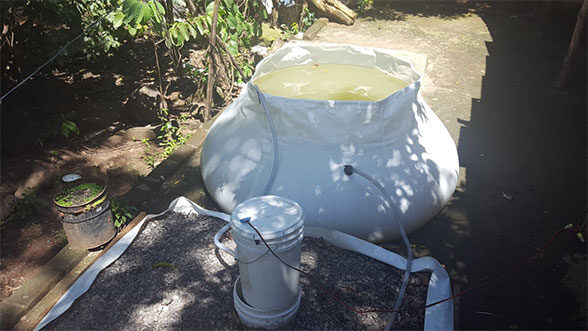 So, what’s the big idea?

Michelle Leach, PhD ’13/MS ’08/BSE ’06, was walking through a village in El Salvador in 2012 when she encountered a child she assumed was about 2 years old. He resembled her little cousin. Leach smiled and said, “Hello.” She expected a smile back, or a very simple reply.

Instead, the tyke said, “Hello, ma’am, it’s nice to meet you. How are you today?”

The biomedical engineer was taken aback: “I realized that his age was a lot closer to 5 than 2.”

She soon learned many children in the village were older than they looked.

“These children had food to eat every day,” Leach says. “There were corn and beans available – but not a lot, nor much else. I started researching alternative agricultural techniques that families might be able to use to produce more protein and vitamin-rich foods.”

And just like that, a brief roadside interaction sparked an innovation to help poor farmers across the globe improve their food supply – and their lives.

The National Oceanic and Atmospheric Administration defines aquaculture as “the breeding, rearing, and harvesting of plants and animals in all types of water environments including ponds, rivers, lakes, and the ocean.” Aquaponics, meanwhile,  is the co-culture of fish and vegetables in a re-circulating biofilter-based system, says Leach.

Using the Oasis Aquaponic Food Production System, families and subsistence farmers can raise their own produce and fish using a few inexpensive elements: a 500-gallon fish tank, water pump, bio-filter, and an area to grow plants, i.e., a “grow bed” filled with gravel or clay beads. Water drains from the fish tank into the bed, where float switches control the action of the pump, which returns the filtered water to the fish tank.

Leach describes the Oasis as a portable, foldable “mini-ecosystem” that relies on the mutually beneficial interaction between fish, bacteria, and plants. 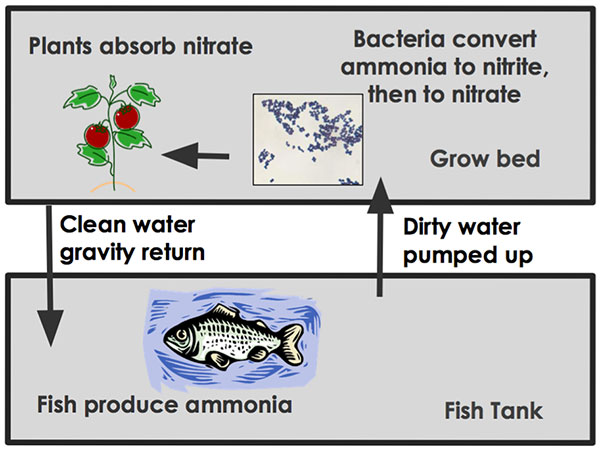 By land and by sea

Large-scale aquaculture is effective, but it requires access to resources and equipment that may be scarce in developing countries. Also, as Leach points out, “centralized aquaculture relies on markets and distribution channels to deliver food to families across broad geographic regions.” Produce and fresh fish have a short shelf life, which limits opportunities for widespread coverage.

“The bacteria present in the bio-filter transform the fish waste into a form of nitrogen suitable for plant uptake,” she says. “The fish feed the plants and the plants clean the water for the fish. This symbiotic relationship allows more food to be grown in a smaller area with less water than traditional aquaculture or horticulture.” 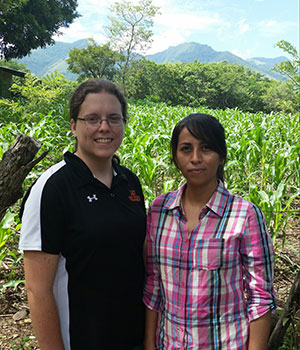 Leach saw in Hernandez a valuable collaborator, and encouraged her to use her senior thesis project to design an inexpensive, accessible, and sustainable method for families to supplement their largely grain-based diets. The resulting project led to “the first low-cost, high-yield complete aquaponics system,” Leach says.

The Oasis mimics a natural river floodplain ecosystem. It is capable of producing up to 200 fish (tilapia) and 600 pounds of vegetables per year. The system works on or off the grid (via solar power), conserves water, and is not reliant on agrichemicals. Its simplicity, size, and flexibility make it easy for people to install near the home, thus women tend to be the main operators. Enterprising owners can supplement the family’s income by selling excess vegetables and fish.

After developing the system in El Salvador, Leach took it to Australia in 2015, where the Oasis was one of 10 winning teams in the Blue Economy Challenge funded by the Australian Department of Foreign Affairs and Trade. In June, Leach and Hernandez traveled to Tanzania to interview potential nonprofit partners to help implement a 30-system pilot project of the Oasis system.

Throughout the process of research, development, and testing, Leach and Hernandez discovered people actually enjoyed operating the aquaponics systems.

“People referred to feeding the fish as being a highlight of their days,” Leach says.

And perhaps the most significant benefit, other than the steady food supply, has been psychological.

“The constant uncertainty of poverty is incredibly stressful,” says Leach. “Producers found the systems reassuring in that they knew they had a reserve of food available. This was an unexpected but very positive result.”