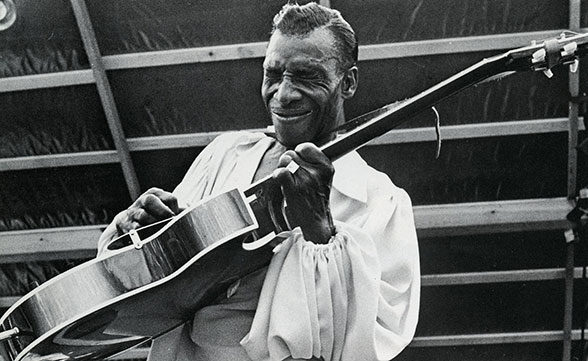 Singin’ the A2 blues 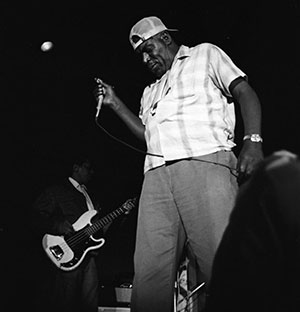 Auto magnate Henry Ford once famously said that history is bunk. But his fellow Michigander James Partridge doesn’t believe it for a minute.

As founder of the nonprofit Ann Arbor Blues Society, Partridge’s mission is to revive the tradition of great live blues music that emanated from clubs, coffee houses, and concert venues across the city during the 1960s and ’70s. Mainly he dreams of resurrecting the landmark 1969 Ann Arbor Blues Festival and restoring the event to the national prominence it enjoyed nearly five decades ago.

That dream moved one step closer to reality on Saturday, Aug. 19, 2017, when an appreciative crowd of about a thousand fans spent a warm, sunny afternoon and evening at the Washtenaw Farm Council Grounds grooving to the music of nine blues acts gathered mostly from Michigan but with a few from farther afield.

The original Ann Arbor Blues Festival attracted 20,000 attendees, featured more than two dozen performers from around the country — including such living legends as B. B. King, Muddy Waters, Howlin’ Wolf, and Big Mama Thornton — and lasted for three days.

Partridge admits he’s got a long way to go. But it’s all part of the plan.

“My aims and goals are both modest and extremely ambitious,” he explains. “The first year, by necessity, was going to be small. We have limited resources, both human and financial. But that’s OK — it will take time to rebuild the festival, and I think we’ll be able to do that if we’re prudent with our resources and what we promise people. Over the next couple of years, my goal is to return the Ann Arbor Blues Festival to its place as one of the premier blues festivals in the country. In 2019, I want to have a festival that truly honors the 50th anniversary of that first festival in 1969.”

Partridge, a lawyer by day, says he never set out to be a concert promoter.

“I became a fan of the blues later in my life, when I started taking guitar lessons with my 10-year old son. The more I learned about the genre, the deeper my interest became. At one point, I thought it’d be great if there was a blues festival in Ann Arbor. I didn’t know much about the city’s history — not having moved here until 2001 — so imagine my surprise when I learned that not only did Ann Arbor used to have some pretty incredible blues and jazz festivals, but that a handful of University of Michigan students essentially invented the electric blues festival!”

Partridge isn’t the only one with an interest in the history of the Ann Arbor Blues Festival. Via his Nashville-based Third Man Records, Detroit rocker Jack White is working to release never-before-heard tapes recorded by some of the students who helped out at the original event nearly 50 years ago.

Not only did Ann Arbor used to have some pretty incredible blues and jazz festivals, but a handful of University of Michigan students essentially invented the electric blues festival.
Explains Parker Fishel, an archivist with the Bob Dylan Music Company: “My uncle John Fishel [BA ’70/MSW ’73] was co-chair of the ’69 festival. By dint of this connection, my dad Jim Fishel and his friends found themselves volunteered as minders for the artists. Between their duties of seeing that the musicians were fed and provided with adequate libations, he and his friends managed to record about half of the festival. Other than the release of Magic Sam’s set on Delmark Records in 1981, these recordings sat in my family’s basement for almost 30 years.”

In 2009, while at Columbia University, the younger Fishel began a project to preserve and digitize the tapes.

“With a small, dedicated team of student volunteers, we transferred and restored the recordings; identified the songs and performers; conducted over 35 oral history interviews with musicians, organizers, and attendees; and reconstructed the festival’s running order.”

Feeling that the recordings deserved a wider audience, they formed Americana Music Productions and asked Third Man to partner on a release.

“The challenge has been locating artists and estates to secure the necessary permissions,” explains Fishel. “But feedback has been positive and we’re well on our way. The release date is still to be determined, but our hope is that it will be no later than 2019 to coincide with the 50th anniversary of the recordings.”

Festival of the year 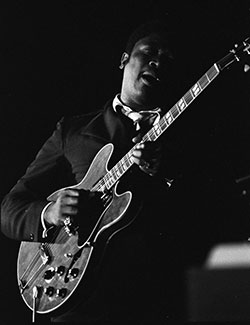 The first Ann Arbor Blues Festival got underway at 7:30 p.m. on Friday, Aug. 1, 1969. Over the coming weekend attendees were treated to nearly 24 hours of the best and most authentic blues the country had to offer, old and new, from city blues to rural blues, northern blues to southern blues, and everything in between.

Critics were virtually unanimous in their praise. Norman Gibson of The Ann Arbor News perhaps put it best, writing simply that “the first Ann Arbor Blues Festival in history was a success from almost any point of view and those who arranged it can be proud of the results.”

Many reviewers preferred the more intimate Ann Arbor event to the mammoth Woodstock music festival that took place in upstate New York two weeks later. Writing in the October issue of Downbeat, critic Dan Morgenstern made his preference plain, dismissing Woodstock in favor of the Ann Arbor affair, which he declared was “without doubt the festival of the year, if not the decade.”

While Woodstock was remarkable largely because of the sheer size of its audience, the Ann Arbor Blues Festival was all about the music. “This particular happening did not attract even one-tenth of the 300,000-plus that Woodstock could boast,” wrote Morgenstern. “But everyone there had come to hear the music — not to make the scene — and the enthusiastic response was a joy to behold.”

The fact that the festival organizers were barely old enough to vote (21 back then) made it all the more amazing. Today it’s almost impossible to believe that a handful of University of Michigan undergraduates conceived, planned, and executed the first major blues festival in the United States.

But perhaps their most incredible achievement was to somehow persuade the University Activities Center and Canterbury House, the student Episcopalian organization, to put up $70,000 for the event. (That’s a jaw-dropping $466,000 when adjusted for inflation.)

Parker Fishel hopes to release a live recording of the 1969 concert in 2019 to mark the festival’s 50th anniversary.
Flushed with success after the ’69 festival — which managed to turn a profit of about $200 — the organizing committee planned an even bigger and better event for the following year. With increased media coverage and another unbelievable roster of stellar performers, the second Ann Arbor Blues Festival was once more an unequivocal artistic triumph, a joyous experience for audience and performers alike that earned the raves of critics from Downbeat, Rolling Stone, Billboard, and newspapers across the country.

Financially, however, it was a disaster.

The potentially ruinous losses incurred by the second blues festival — between $20,000 and $30,000 — eventually were made up through donations and benefit concerts, but the damage had been done. There would be no blues in Ann Arbor for 1971.

Rainbows to the rescue 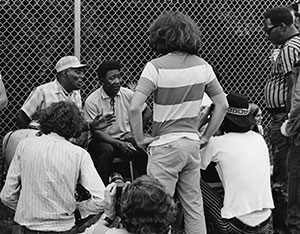 But all was not lost. The next year local hippie activist John Sinclair, BA ’64, and his Rainbow People’s Party took up the gauntlet, inaugurating the slicker, more professional Ann Arbor Blues and Jazz Festival, with a broader musical foundation and higher-profile performers such as Ray Charles, Count Basie, Miles Davis, James Brown, Dr. John, and Bonnie Raitt.

But the Rainbows couldn’t seem to make money out of it, either. Deeply in debt, Sinclair called it quits in 1974 and the Ann Arbor Blues and Jazz Festival lay dormant until being revived once more in 1992.

In this incarnation the festival would have its longest continuous run, surviving for nearly a decade-and-a-half. But once again the familiar pattern emerged: artistic success, financial failure. After the last festival in 2006 an accumulated debt of nearly $60,000 remained on the books.

Despite the fête’s long history of pecuniary woe, James Partridge believes he has every reason to be optimistic about the chances for a sustained revival of the Ann Arbor Blues Festival. The initial outing exceeded expectations, and he’s confident that it can be made to work this time around.

“Some unexpected developments helped make this year’s event extra-special,” he says, “and really helped establish the link between previous festivals and the current iteration. The first was that Ron Marabate [BA ’70/MS ’71], technical director for the very first blues festival in 1969, made the trip from Lansing to attend. It was a thrill to meet him and hear him tell stories of that first festival.

“Another surprise came on Friday afternoon, when a couple of people drove up and introduced themselves as associates of Prism Productions, the organization that put on the Blues and Jazz Festivals beginning in 1992. They opened the trunk of their car, revealing the backdrop that had hung behind the main stage at their productions of the Ann Arbor Blues and Jazz Festivals and asked if we would like to have it for our event. It took me about 3 milliseconds to say yes.

“We even got a break from Mother Nature,” Partridge adds. “As late as Friday, the forecast called for rain and possible thunderstorms in the afternoon of the festival, but the day was perfect — blue skies and relatively cool temperatures for August.”