The woods were his classroom Forest for the trees

In the 1860s, when Michigan soldiers were fighting the Confederates in the American south, the lower peninsula’s forests still stretched in a magnificent green blanket from the Thumb to the Straits of Mackinac — white pines and hardwoods five feet around at the ground and soaring to heights of 200 feet.

By the time those Union soldiers were grandfathers, the forests had been stripped and sold off. Much of the northern lower peninsula had been turned into a wasteland of stumps and slash, waiting for someone to lead the work of starting the forests over.

That figure arrived in Ann Arbor in 1903. He was Filibert Roth. Twenty years later he would be recognized as one of America’s great foresters, and known among hundreds of U-M forestry students as “Daddy” Roth.

Son of the German forest

Born in 1858 to a German father and a Swiss mother, Roth spent his early years roaming German forests. When he was 12 years old, his family emigrated to Wisconsin, where he was apprenticed to a shoemaker. When he was 18 his father was mysteriously murdered. To relieve his family of one mouth to feed, he struck off for the West on his own, working his way from one sawmill and cattle ranch to another.

In his mid-20s he returned to Wisconsin to teach at a country school and prepare himself to qualify for college training. He met and married another teacher, then enrolled at the University of Michigan, where he paid his way through school by working as a curator at the University Museum.

There a professor of botany, Volney Spalding, spotted Roth’s first-class mind and temperament, and coaxed him into the study of trees. Before long, mostly through self-education, Roth had a BA and  enough graduate training that he was one of the country’s leading authorities on the new field called “timber physics” — the study of the structure of trees and wood.

With Spalding’s help, Roth landed top jobs in forest management at the U.S. Departments of Agriculture and the Interior. As chief of the new Forestry Division at Interior’s General Land Office, he was charged with reforming the management of federal forests, long overrun by inefficiency and corruption. He designed a thorough revision of forestry practices, but it ran into snarls of red tape. So he was ready when academe reached out once more.

Roth spent two years at Cornell, then was recruited back to Michigan, where the regents had established a full-fledged Department of Forestry. They named Roth to run it. The state of Michigan gave him a second job — state forester, with a mandate to restore 34,000 acres of cut-over land around Higgins and Houghton Lakes.

He began a career-long campaign to bring responsible forest management not just to Michigan’s depleted woodlands but to forests across the country, public and private. He urged federal over state control of disputed woodlands, fearing that states would cede authority back to the private lumber companies responsible for the ravages of clear-cutting in the 1800s.

But Roth’s main impact on forestry grew from his impact on the generation of foresters whom he trained. 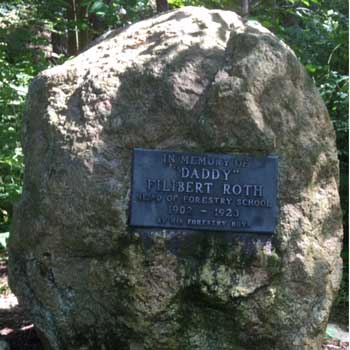 This boulder at Saginaw Forest celebrates “Daddy’s” contributions to U-M and the environment. (Image: James Tobin.)

As an instructor he was superb — an expert’s expert, yet always down to earth and able to unpack the difficulties of understanding a forest.

According to one of Roth’s students, “He had an uncanny ability to make difficult and complex propositions appear simple . . .  ‘Now,’ he would say in that kindly way of his, ‘just what is it you are trying to find out?’ He could shuck the husk off a problem and expose the kernel of it in the shortest time. He cut through reams of devious, intricate reasoning in a manner apparently intuitive . . . Where most of us fumble or grope he traveled easily and saw clearly.”

For the lumber barons responsible for what he called “scavenger logging,” Roth had only scorn. But with his “boys,” he was warm, friendly, and supportive. He hand-wrote long letters to encourage them to attend Michigan, and when they were ready to graduate, he wrote equally long letters of support, extolling them to prospective employers.

Early in his career he had to speak up for university training against old-school critics of book-learned woodsmen. But he also believed deeply that the best training in forestry happened in the forests.

Week after week, he sent his “boys” packing on foot out to Saginaw Woods, an 80-acre reserve at Ann Arbor’s western edge. On this farmed-out plot — donated to U-M by Regent Arthur Hill (namesake of Hill Auditorium) — Roth’s students improved the soil and planted some 40 species of trees to see which would fare best.

“Those Michigan men are good,” the president of the Society of American Foresters once remarked. “They may not know more forestry, but they do more.”

“Life is too full of good things”

Most important, perhaps, Roth’s students were inspired to imitate his character.

Long after his death, one of them remembered an especially rough outing with “Daddy” into the Adirondack Mountains of upstate New York.

The black flies were swarming; the trail was bad; and when they finally pitched camp for the night, pessimistic talk about their plans for forestry careers was spreading among the students.

Roth listened for a while, then said softly: “I don’t know how it will be with you boys, but as far as I am concerned, I have never felt that I had time to stop to make money — life is too full of good things.”

“The manner, the personal magnetism, not the words, went deep,” the student remembered. “There was no more grumbling, and every man around that campfire remained in forestry.”

In 1912, Roth accepted an offer to become head of the new Department of Forestry at Cornell. He was expected to take many Michigan students with him. A somber farewell banquet was staged by the University’s Forestry Club.

But Roth’s colleagues and supporters throughout the state were determined to keep him in Michigan. When the regents promised more funding — not for Roth, but for his department — he sent Cornell his regrets.

“I am here sto stay,” he wrote in the Michigan Forester, “and I propose to devote the rest of my time to building up our school; your school . . . Let us all join hands in this enterprise and make Michigan what it should be — the great forestry school of the nation.”

In 1923 he stepped down, saying he felt his strength was waning. “I never had any use for a ‘has-been’ in a big place he cannot fill,” he said.

“The greatest monument to your work,” Greeley said, “will be the wonderful crowd of foresters whom you have launched into the profession and the spirit of usefulness and zeal which they have carried from you into their professional duties.”

Roth died two years later, in 1925. His Department of Forestry evolved into what is now U-M’s School for Environment and Sustainability. When the University established a summer training camp for forestry students in the Upper Peninsula (first near Munising, then re-situated to Golden Lake, near Iron River), it was named for Roth. And a new forest crown stretches across large swaths of northern Michigan and the Midwest. These were “Daddy” Roth’s longest lasting legacies.