Hair down to there

Gimme a head with hair 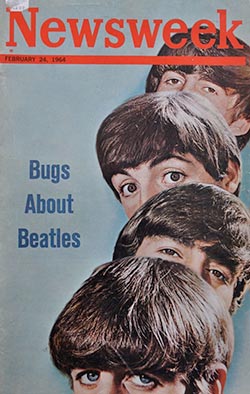 Fifty years after Beatlemania, it’s hard to recapture just how shocked the older generation was by the hair of John, Paul, George, and Ringo.

“Visually,” Newsweek told its readers in February 1964, “they are a nightmare: tight, dandified, Edwardian-Beatnik suits and great pudding bowls of hair.” (The magazine thought even less of their music  — “nutty shouts of ‘yeah, yeah, yeah’ … a catastrophe … a preposterous farrago of Valentine-card romantic sentiments.”)

In Ann Arbor, Michigan men shared that Establishmentarian view of the “Beatle cut” for a much longer time than prevailing memories of the 1960s would now have it.

The musical Hair first celebrated the American “freak flag” off-Broadway on Oct. 16, 1967. But if the pages of the Michiganensian are to be trusted, it would be years before U-M saw more than a few men letting their hair truly fly. 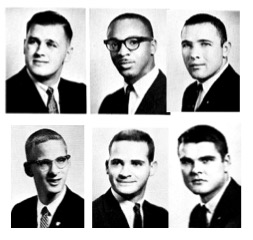 Michiganensian photos of 1964 — the first year of the British Invasion — show men who unanimously shared the sentiments of the Apostle Paul, who had asked the Corinthians: “Doth not nature itself teach you that if a man have long hair it is a shame unto him?” As for the rage for Beatle wigs, the Michigan Daily says: “The wig wearer, you must admit, runs a healthy risk of being mistaken by not only the neighborhood Great Dane, but also by the neighborhood dog catcher.” 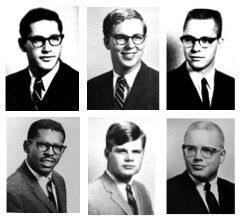 A Daily columnist estimates that “the average 1965 Michigan Freshman male has a haircut at least one-third longer than the average Freshman of four years ago. I attribute it to the Beatle influence.” Maybe so — but one-third of a buzz-cut isn’t much. In the yearbook published the following spring, senior men show only the tiniest tendency to outgrow the button-down style of the Kennedy years. 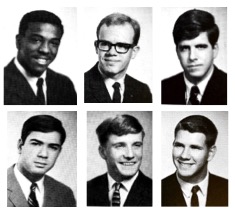 In this 1968 montage from the Ensian, the young man at upper-right sports the Bobby Kennedy forelock — an anti-buzz-cut statement that still barely registers above an amplified whisper. 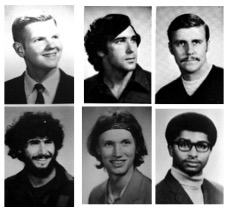 Now the break-out begins. On many Michigan men the ears go into hiding, and even among the button-down brigade, the sideburn begins its descent. 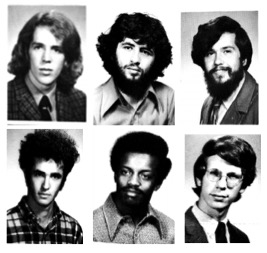 By now the hair wars are going to court, where judges are asked to rule on whether schools have the right to insist on haircuts. “Nothing is more indicative of the importance currently being attached to hair growth by the general populace,” Justice William O. Douglas writes, “than the barrage of cases reaching the courts evidencing the attempt by one segment of society to control the plumage of another.” There is no restraint, legal or otherwise, at Michigan, where “shoulder-length and longer,” in the lyrics of Hair, has become the new normal. The style is far up, far down, and far out, even among those still willing to wear a tie for the yearbook shoot. 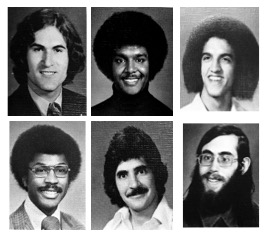 The tide has crested. “Times were when getting a haircut was the ultimate gesture of subservience to ‘the system,'” the Daily reports. “Young men on campus would rather risk the uncertain fortunes of a girlfriend’s amateur scissors and comb job than allow some decidedly unhip barber to get his clippers on their lengthy locks.” But now Ann Arbor’s barbers are back in the black: “More and more people in the city are getting their hair clipped, combed, and styled by barbers who have re-educated themselves to current styles” — still long, for sure, but more shapely. 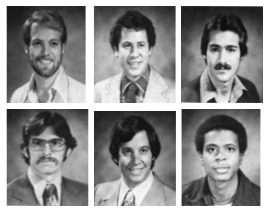 Call it the Disco Transition. As collars flare, the sight of ears is once again tolerated. 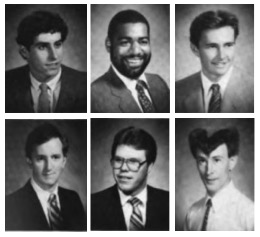 It stops by itself

Twenty years after Beatlemania, it’s the age of Reagan. It’s after the Afro, but it’s not back to the buzz-cut. And there’s a little more room for the occasional nonconformist. Call it progress.