Movie house vs. your house

The ins and outs of moviegoing 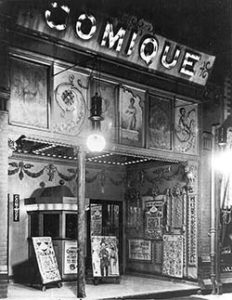 Going to see a movie in a theater is often colloquially referred to as a “brick-and-mortar outing.” This distinguishes it from watching a film on one’s home theater system, TV, or computer.

Attendance in a movie theater comes with certain innate benefits because most films (particularly action flicks and comic-book retreads) are created to maximize the audiovisual aesthetics of a public screening. That’s why home theaters have been tweaked over time in an attempt to bring film imagery and acoustics closer to a brick-and-mortar experience, especially for the viewing of epic franchise films flush with visual and aural bombast.

Since the arrival of 5-cent “nickelodons” at the turn of the 20th century, filmgoing has been regarded, to a significant extent, as a shared encounter. Films became a form of populist entertainment, serving an audience that could not afford professional stage performances. And in its silent era, cinema was a democratic and international medium that, save for an occasional title card on screen, delivered dramatic pantomime that entertained filmgoers of any tongue.

In addition to the pleasures and camaraderie of a shared cinematic event, filmgoing also promises a private, personal effect on the viewer. Psychologist Hugo Münsterberg, a German immigrant and Harvard professor, was among the early theorists to discuss the special impact of watching movies. In its December 1915 issue, Cosmopolitan magazine published Münsterberg’s article “Why We Go to the Movies.” A year later he expanded the piece into book form as The Photoplay: A Psychological Study. A succinct concluding statement in Münsterberg’s book (p.233) addresses the unique nature of filmgoing and how it can play on one’s inner-self:

“[The photoplay] is an entirely new aesthetic development, a new form of true beauty in the turmoil of a technical age, created by its very technique and yet more than any other art destined to overcome outer nature by the free and joyful play of the mind.”

That last statement — “more than any other art destined to overcome outer nature by the free and joyful play of the mind” — encapsulates the private, psychological appeal of going to the movies. The cinema possesses those aesthetic qualities that can remove us from our outer world into one that is deeply and personally affective.

My favorite film poem, “Movie House,” was written by John Updike and published in his 1963 poetry volume Telephone Poles and Other Poems. It’s an ode rich in nostalgic metaphors and historical and cultural allusions.

View it by day, from the back,
from the parking lot in the rear,
for from this angle only
the beautiful brick blankness can be grasped.
Monumentality
wears one face in all ages.

No windows intrude real light
into this temple of shades,
and the size of it,
the size of the great rear wall measures
the breadth of the dreams we have had here.
It dwarfs the village bank,
outlooms the town hall,
and even its decline
makes the bright-ceilinged supermarket seem mean.

Stark closet of stealthy rapture,
vast introspective camera
wherein our most daring self-projections were given familiar names:
stand, stand by your macadam lake
and tell the aeons of our extinction
that we too could house our gods, could secrete a pyramid
to sight the stars by.

Updike offered this beautiful poem as a kind of eulogy for those grand old movie houses, designed with imposing architectural features, fancy ornamentation, and luxurious amenities. Slipping into one of those movie houses for a late morning or early afternoon matinee evoked for many that “stealthy rapture” to which the writer alluded. 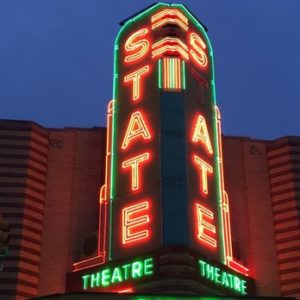 Even the iconic State Theatre marquee got some TLC as part of its recent renovation.

As multi-theater movie complexes popped up in the late-’60’s and early ’70s, filmgoing took a stripped-down turn toward the basic. Things often started with a drive to the shopping mall and went downhill from there. Audiences shared box-like auditoria with unadorned concrete walls and a single center aisle. Many mainstream cinephiles favored the comforts of home and chose to stick by their televisions; microwave popcorn sales flourished.

A quick Google search shows home theaters range widely in price, depending on how sophisticated one plans to get. Projectors, Surround Sound, seating, and other amenities do add up. Most of us enjoy a large-screen, digital television connected to some really powerful speakers. And home viewing allows one to stop and start programming at will, speak at regular volume, and use the restroom without missing a beat. These are just a few conveniences home viewers have come to favor, not the least of which is plush seating.

Theater owners soon saw the error of their ways, and have made significant improvements to lure homebodies back into the cinema. This was great news for film fans seeking the gratification that comes with watching a motion picture in a darkened movie theater with an impressive sound system. Over time, film fans have come to expect terraced, stadium-style seating with improved sightlines to tamp down distraction from viewers in forward seats. Increasingly, concessions include alcoholic beverages and an expanded menu — gourmet pizzas, nachos, and hotdogs, among other items.

Ann Arbor’s recently renovated State Theatre with four screening spaces is an ideal example of such an upgrade. Not only have the sightlines improved but so have the seats that gently recline, providing more legroom and accessibility. For alums returning to Ann Arbor, a visit to the State — especially if you recall the original — will surprise and please. Filmgoing is booming in our city with seven viewing screens between the State Theatre and the Michigan Theater, the latter also worthy of a visit as a proud survivor of John Updike’s “Movie House” monumentality.

Listen to this podcast, recorded with Lee Berry, chief development officer at the Michigan Theater Foundation, prior to the State Theatre’s recent reopening. Many of the upgrades were designed to get you out of the house and into the theater. (Hear more “Listen In, Michigan” podcasts. Subscribe at iTunes, Tunein, and Stitcher.) 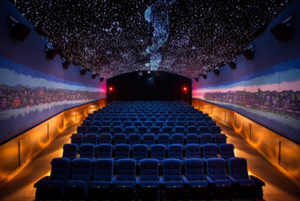 Regular cinephiles tend to favor “sweet spots” in a film auditorium. I surveyed some friends about their preferences and heard a number of practical responses. Back-of-the-theater and aisle seats were popular for those seeking easy access to concessions and rest rooms. Some filmgoers said they try to avoid “down-front” seating where sharp upward and side-angle perspectives can cause neck strain. One respondent complained that down-front seating can cause a sensation like motion sickness, especially in pictures with rapid-fire, hand-held camera shots. I can attest to that as it happened to my wife, Gail, and me when watching Captain Phillips. We had to leave early, though I did watch the movie later on a plane. Great film, even at such a diminuitive scale.

Of course, sweet spots are  not fixed. They can change, depending on the size of the venue. One filmgoer said that in a large room like the Michigan’s main auditorium, she prefers sitting further back. But in a small space, like the theater’s tiny “Annex,” sitting five or six rows away from a smaller screen provides a pleasing, intimate experience.

Phil Hallman, film studies field librarian at U-M, explains his seating preference this way: “I like to sit down front on a side seat. I prefer to be by myself, not surrounded by lots of others.” Lest you think Phil is antisocial, it’s quite the opposite. He is respectful of his compatriots in the communal theater-going encounter.  “I’m six-foot-four and I’ve learned that if I sit among others, I’m going to block someone”s sightline,” he says. “Also, the front side area isn’t particularly popular so I can almost always find a good seat.”

Advice from the experts

Experts at the Society of Motion Picture and Television Engineers point out that films are designed for theatrical viewing in specific ways. They suggest sitting in center seats in a row that’s approximately two-thirds of the way back from the screen. That, they say, will place the screen’s edges just inside your range of peripheral vision. This makes for optimal horizontal viewing, as the angle range is said to be calculated at 36 degrees.

Do you have a favorite movie theater “sweet spot?” Let me know in the comments below.
Acoustical engineers also have developed sound systems that work in combination with the image calculations so that sound reproduction also does justice to today’s multifaceted, high-fidelity soundtracks. The aforementioned seating suggestion — two-thirds-of-the way back, center row area — is said to work as well for sound quality as it does for screen imagery.

These technical considerations may distract from the pleasures of moviegoing at first, but one should never underestimate the value of proper seat selection. It all depends on the venue, the film, and of course, the company you keep.

For instance, if you’re on a date in an older theater like the Michigan, you might forgo your typical spot and say, “To heck with Beaver’s advice,” and just head on up to the balcony.