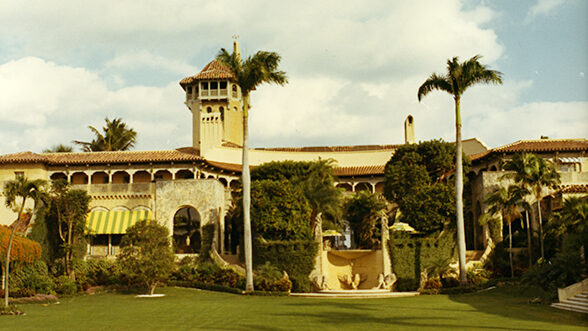 Fit for a king 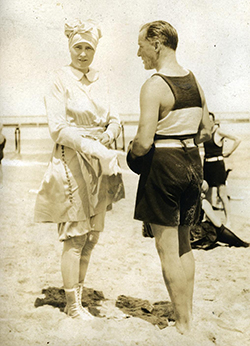 The real estate broker inquired about the status of the posh estate in Palm Beach, Fla. Was it available?

“I do not know if she [the owner] would even consider an offer for it,” was the reply. But, if the broker’s client wished to move forward, he should know that the property “stands her in close to $4 million.”

The broker was not cowed by the sum, though he speculated that his client may prefer to be a tenant rather than a buyer. And the interested party, he wrote, “is no less a personage than the Duke of Windsor.”

That is: the Duke of Windsor, also known as the former king of England, Edward VIII, who had abdicated the throne in 1936 to marry American divorcee Wallis Simpson. And, naturally, if royalty were interested in living in south Florida, this particular property — Mar-a-Lago — was the crown jewel.

The sprawling 128-room palace was built for and partially designed by Marjorie Merriweather Post, the daughter and only child of cereal magnate C.W. Post. When her father died, Marjorie took over his Battle Creek, Mich.-based Postum Cereal Company. She would expand the family business and go on to form the General Foods Corp. in 1929. Known for some time as the wealthiest woman in the U.S., the heiress/philanthropist amassed a fortune over her lifetime worth about $250 million.

The letter about the Duke of Windsor’s possible interest in her extravagant Palm Beach home (just one of many in her real estate portfolio) can be found in a collection of Post’s papers at U-M’s Bentley Historical Library. The collection totals 57 linear feet and covers the life story of both Post and her splendid getaway.

Mar-a-Lago (“sea-to-lake” in Spanish), sits on 17 acres and features an 1,800-square-foot living room with 42-foot ceilings. Completed between 1924-27 for about $7 million (close to $100 million in contemporary dollars), the home’s construction kept hundreds of workers employed during a perilous period in the nation’s economy. Post, meanwhile, spared no expense, outfitting Mar-a-Lago in gold-plated fixtures, Spanish tiles, Italian marble, and Venetian silks, among other exotic fare.

In 1985, now-President Donald Trump purchased the spectacular estate for a reported $8 million (as he wrote in his book, Trump: The Art of the Deal). 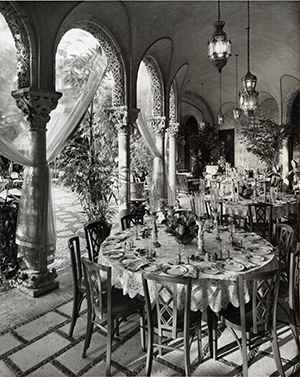 Long before the U.S. president entertained guests and dignitaries in the Mediterranean-style villa, Post opened her doors to celebrities and royalty, dancers and artists. Glamorous balls, galas, and charitable events were the order of the day. Controversy and challenges still made their way through its halls, though nothing Post and her staff couldn’t handle.

A letter from one of her staff members, dated March 27, 1969, addresses whether a film should be screened at the home and the possible attendance of one of the stars: “Helen Rich called regarding the evening for the fine arts festival which you told Mary Howes she could do here at Mar-a-Lago . . .  There has been no word as yet from Margot Fonteyn but Helen feels they should go ahead with the film Romeo & Julietwith Fonteyn and Nureyev in any event. She feels it would be a great pity not to keep the fine arts in front of people after its wonderful start last season.”

And then there was the issue with the rug. A note from 1971 from one of the staff members states that a drawing of a rug pattern and sample colors were received. “Many thanks, dear. Here is the story: [Post] does not like the pattern or the colors.” Polite expressions of endearment were ever-present, even in the rejection of flooring choices.

You are cordially invited

The grandness and elegance of Mar-a-Lago made it the perfect setting for a nearly endless string of dinner parties. And who wouldn’t want to be on the guest list?

“Post was famous for treating guests well, offering a full day’s worth of activities, brand new movies screened every night and, on one occasion, a special show from Ringling Bros. and Barnum & Bailey circus,” recalled an article in Time.

The ambassadors of Panama and India dined together. Mrs. Joseph P. Kennedy attended a ball; Lady Bird Johnson came to a dinner when she was first lady. A countess had cocktails with cosmetics magnate Estee Lauder. And just imagine the conversations that took place on the night Chief Justice Warren Burger, a sculptor, a senator, and the ambassador of Portugal attended the same dinner.

Mar-a-Lago was a favorite subject of newspaper style pages and architecture magazines, many of which are collected in Post’s papers at the Bentley. Architecture publications gushed over the medieval-inspired entrance halls, the Spanish Renaissance furnishings, and the 4,000-pound dining room table Post commissioned from the Medici Marble Works in Florence. “[Post’s] idea was to pattern the main house after the villas on the Mediterranean with an Hispano-Moorish accent,” stated a 1972 Washington Poststory. 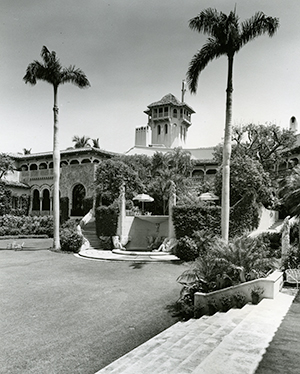 A longtime philanthropist, Post decided in her later years to donate Mar-a-Lago to the federal government as a “Winter White House.” That proved to be more difficult than she expected, as years of legal wrangling and concerns about the cost of maintenance stalled her plan. The U.S. government, encouraged by Post’s promise to provide $200,000 a year for maintenance of the estate, accepted in 1972.

The arrangement prompted a Timemagazine writer to quip, “[Post’s] gift was gracious, but it also seems designed to make the isolation of the presidency a bit more splendid than it ought to be. Perhaps in the interests of sheer humility a constitutional amendment should require that a President spend at least a few weekends a year in a trailer camp or a slum, or sleeping on a relative’s Hide-a-Bed in East Lansing.”

Alas, Mar-a-Lago was not to become the “splendid isolation” getaway for our nation’s presidents, at least not at that time. After Post’s death in 1973, upkeep and tax costs soared and the government returned the estate to the Post Foundation in 1981. Four years later, Trump purchased the mansion, and as president has made it his retreat — indeed, much like the “Winter White House” Post once envisioned.

Working through the collection at U-M’s Bentley Library, one wonders what Post would have thought about the status of her home today. Surely, she would have been pleased that her wish was fulfilled, following a most unlikely journey. But what would she think of the owner and, in particular, his politics?

A 1966 letter to the Republican National Finance Committee hints at an answer: She might disagree with him on the issues or his approach, but she would be unfailingly polite in doing so. In the letter, Post wrote that she regretted not being able to go to a luncheon, where attendees included then-U.S. Rep. Gerald R. Ford and other rising stars in the Republican Party.

“Perhaps, however, I should explain to you that I am a Democrat,” Post wrote. “Nevertheless, since I am a strong believer in the two-party system, I am delighted to know that the Republicans are taking this keen and active interest in their party.”


This story was developed in partnership with the Bentley Historical Library, which holds the Post Family Papers. The Bentley’s magazine, Collections, is distributed twice a year.