All good in the agrihood 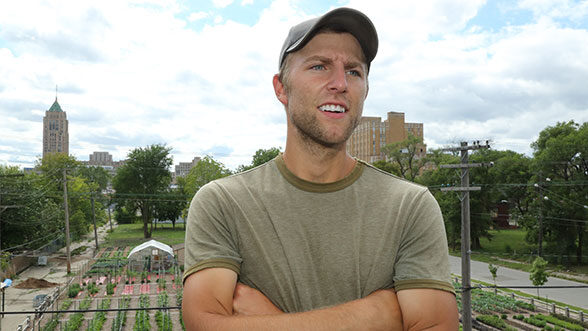 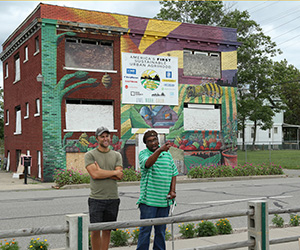 Calvin Beecham (right) once lived in a house that stood on the property where MUFI now exists. “This is really beautiful,” he says. (Image: Michael Luongo.)

The painted wooden stairs are chipped, leading upward to a flat rooftop three stories high. The wind blows in strong gusts up here as verdant rows of vegetables and flowers flutter in the dark soil below. On the horizon, the art deco Fisher Building shimmers in the setting sun — a striking reminder that this bucolic scene is in the heart of downtown Detroit.

Tyson Gersh, BA ’13, surveys the surroundings from his vantage point atop the Michigan Urban Farming Initiative’s (MUFI) headquarters. An apartment house dating to 1915, the building was abandoned in 2009. Today its brick exterior is painted with colorful murals — mostly plants and Motor City icons. As renovations toward LEED certification move forward, MUFI co-founder/president Gersh envisions a community resource center with administrative and multipurpose spaces, a marketplace, and a production/packaging kitchen.

He is cultivating much more than a self-contained urban farm on Detroit’s North End. He hopes to grow a thriving “agrihood” that extends far beyond the initiative’s three acres.

He contends the increase in land value represented by urban farming — rather than the food urban farming produces – is the real end game. He likens his farm and others to New York City’s Central Park, citing the positive ripple effect that well-maintained open spaces can generate beyond their borders.

“The value of urban ag is in these tangential spaces that it affects,” Gersh says. “It’s strategically using green space as a performance enhancer for adjacent land uses.

“We’ve seen $3.5 million worth of investment in the form of homes purchased and rehabbed, in ways that wouldn’t have been supported by the market otherwise,” Gersh continues. “I think [urban ag] is a part of good urban planning at this point.” 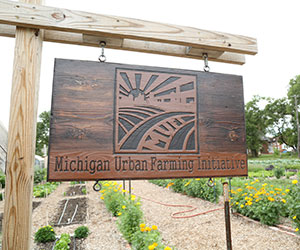 While experts can’t agree on the exact amount of vacant land in Detroit, most estimates range between 27-40 square miles. The organization Keep Growing Detroit counts more than 1,500 gardens and farms in the city, ranging from individual and community gardens to large-scale farms.

Business plans and intentions vary as widely as the crops being produced. MUFI, for example, is a 501 (c)(3) nonprofit, with some 85 percent of its funding provided by corporate sponsors. The organization is staffed mostly with volunteers; some 10,000 participants have logged more than 100,000 hours of service, says Gersh. Since 2011, they have grown and distributed about 50,000 pounds of free produce to local households, churches, and food pantries. Yes. Free.

MUFI’s partners and sponsors are national and global players, including Target, Garnier, General Motors, and BorgWarner.

“We’re proud to be working alongside the private sector to help drive this innovation, which honors the Motor City’s extensive history of industry leading the establishment of the built environment,” Gersh says. “In the context of emerging technology and decentralized systems, it’s a very exciting time for big brands to be thinking about what cities of the future will look like, especially one with such a rich past.

“We went out and forged these relationships from national and even global networks,” Gersh continues. “To this day we have yet to receive a dollar of local foundation funding. Ultimately, I feel that all urban ag groups should have the freedom to pursue whatever model they choose. As an industry, urban ag is under much scrutiny right now as it relates to its viability as a long-term land use in urban areas.” 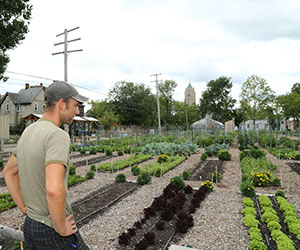 Surveying the land — and the Fisher Building. (Image: Michael Luongo.)

For farming initiatives to continue thriving in the Motor City, Gersh says, communities must consider multiple methods. Diversity, innovation, and agility have to be baked into every business model.

As for Detroit, some of the bigger players include the massive woodland Hantz Farm, home to some 24,000 trees on the lower east side. D-Town Farm is an African-American return-to-the-land project and Recovery Park Farms supports former prisoners and others. In addition, the city’s Capuchin monks run Earthworks Urban Farms to grow produce for their soup kitchen.

Gersh widened the lens of “traditional” urban farming with MUFI to prove it can be a responsible use of land that spurs economic development, he says. But convincing others, especially his fellow urban farmers and Detroit residents, requires much time away from the farm. A typical work week can top out at 80 hours, as Gersh weeds through administrative obstacles regarding city land use, land ownership, and more. Community relations also consumes much of his time. Though much of the feedback is positive, Gersh’s detractors criticize him for distributing free produce, which may erode other farms’ customer bases and profits. Some local residents decry his “agrihood” concept, arguing that producing and selling healthy and inexpensive food to Detroit residents is more important than increasing property values.

Gersh is convinced urban agriculture can do both, and he’s striving to identify best practices that can be replicated in other urban areas.

“We acknowledge and value the objectives and perspectives of a wide variety of stakeholders,” he says. “Our willingness to expand the purview of our work is evidence of our commitment to collaboration across sectors.” 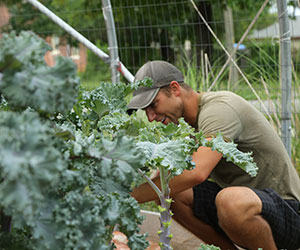 The view from above MUFI may be inspiring, but the scene reminds Gersh that a farmer’s work is never done. Especially in an ever-evolving Detroit.

Many aspiring urban farmers — from Pittsburgh to Brazil – have reached out to Gersh for guidance to launch their own initiatives, he says. MUFI recently hosted a Belgian delegation of urban and economic leaders, including the mayor of Charleroi and the vice dean of the faculty of architecture of the Free University of Brussels.

“We’re trying to create a proof of concept for a formal, functioning ‘agrihood’ model that can be implemented elsewhere,” Gersh says. “In the face of continuing pressures, it’s necessary to adapt, pivot, and get ahead of the curve.”