Strangers when we meet 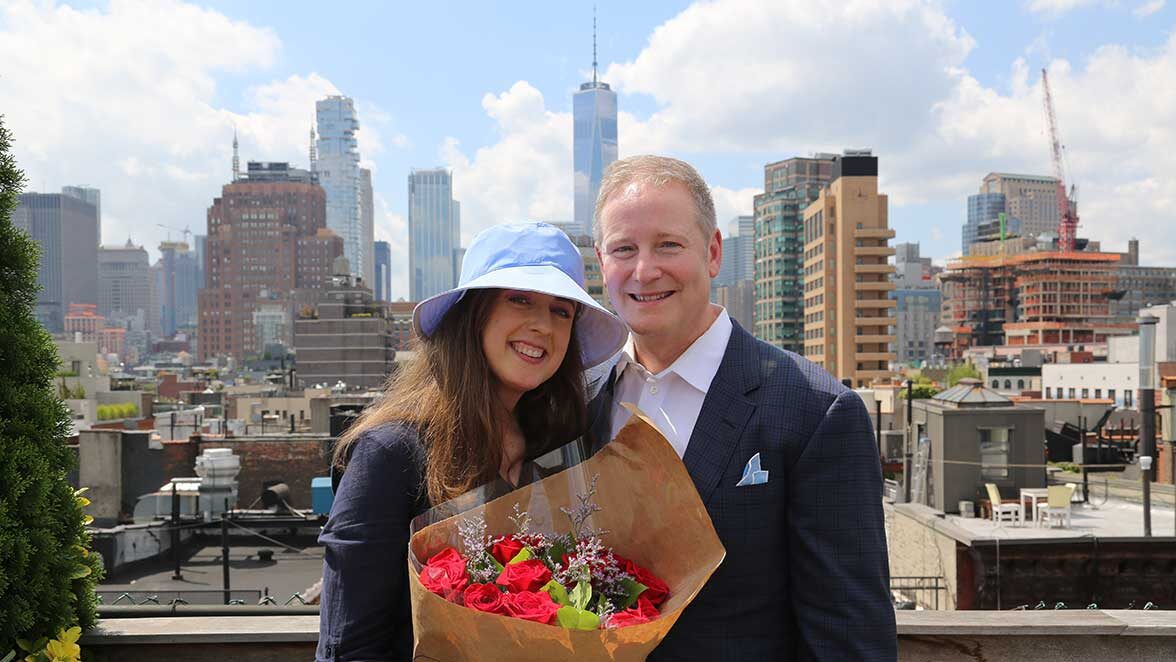 Patrick Anderson, BA ’81/MPP ’83 does not fit the profile of your typical “refugee.”

But in the immediate aftermath of the Sept. 11, 2001, attack in New York City, the Michigan native found himself alone on the street. He’d fled his room in the Marriott World Trade Center after the first plane hit the North Tower and the hotel, which was nestled between the North and South Towers. It was shortly before 9 a.m., Anderson was wearing only one shoe, and he watched in horror as the second plane hit the South Tower — flying directly over his head. All he could do was run.

He had no place to go, and worse, no way to contact his family back home.

After several minutes, some of which were spent beneath a garbage truck as debris fell from the sky, “I was no longer in fear of losing my life,” Anderson says. “But the gravity of the situation was sinking in. Thousands of people were dying just blocks away. My mind recoiled at the idea that this was happening on purpose, and I knew the world had changed. My family didn’t know if I was alive or dead. I had no hotel to return to and no way to get home.

“I thought to myself: ‘You’re alive, but you are a refugee now.’”

He took shelter in Stuyvesant High School about a half mile from Ground Zero. Students were scheduled to take senior photos. Anderson slumped down next to a locker and sat on the floor. It was then a random stranger approached him.

We can be heroes

The stranger asked Anderson if he was a teacher or someone’s parent.

And for some reason, he replied, “I’m from Michigan.”

That stranger was a local photographer’s assistant named Emily Maroney. To Anderson, she was a hero. And though he’s confident he would have found accommodations and a way to return home eventually, Maroney made the process much easier.

“Emily showed me how a perfect stranger can give you love and care and protection in a way that can only be explained by the presence of God,” Anderson says. “It was in that moment I needed to know there’s a goodness in human beings.”

Maroney walked along the West Side Highway with Anderson, taking him to the photographer’s office so he could contact his family and arrange for a place to stay.

“She shared her yogurt and her orange with me,” Anderson says. “She took me under her wing and would not let me go until she knew I had a plan.”

Anderson and Maroney stayed in touch after the tragedy. He sent her flowers the following Sept. 11 and they exchanged Christmas cards. But when Maroney moved about 15 years ago, Anderson says he lost track of her. He tried finding her through the Internet but with no success.

“There are stories of heroism that day; big sacrifices that people made,” Anderson says. “I feel it every day. I often think about the firemen I saw, some of whom never made it out. Those are the big heroes. I can’t pay them back. And then there are the small heroes. Emily is a small hero. She didn’t have to help me, but she did.”

Just for one day 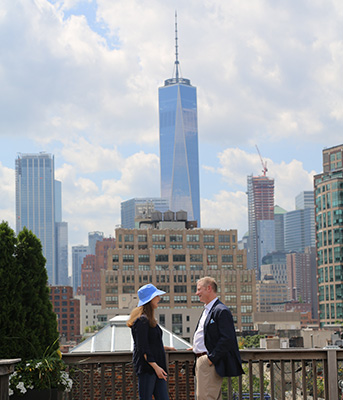 Anderson finally got a lead on Maroney when Blink Productions approached him to participate in a program about life-changing chance encounters, executive produced and reported by journalist Ann Curry. “We’ll Meet Again” debuted on PBS in early 2018; Season 2 unspools this fall. The program “reveals the powerful bonds forged among people who now, against the odds, have the opportunity to reunite with someone who transformed their life.”

In addition to “Heroes of 9/11,” the first six episodes of the series showcase dramatic reunions borne of World War II, Vietnam, Mt. St. Helens, the Civil Rights movement, and gay rights. Episodes are available at pbs.org.

“I was a bit reluctant to do the show; it is difficult to relive such a harrowing experience and, of course, to confront once again the fact that so many people died – including those who helped people like me,” Anderson says. “But I certainly wanted to find Emily and thank her. I wanted her to see that my family was thriving and that I hadn’t forgotten her.”

After their encounter in 2001, Maroney quit her job as a photographer’s assistant to become an art teacher.

When the production crew tracked Maroney down and reunited the pair, Anderson says he was dumbstruck by Maroney’s reaction to him. He says he “underappreciated” how much his intention to find her mattered.

“When we met she said, ‘You helped me,’” Anderson says. “That was a total surprise. But she tells the story the exact same way I do after all these years.”

Though their reunion was recorded for a TV program, Anderson says the interaction was authentic. “We are real people with a real story,” he notes. “This is a true point of happiness for us. Yes, a TV crew happened to be there — so that’s unusual – but the happiness when you reconnect again is genuine. It’s really special. People should try it more often.”

The experience of confronting one’s mortality and accepting the fragility of life under such dire circumstances left an indelible impression on Anderson.

“It is much easier for me to tell someone I care for them than it was before,” he says. “I’m much more likely to empathize with people. I’m more sensitive to tragedies, and it’s easy for me to understand those feelings of terror, of what other families go through.”

He says he worries about the degree to which social media (and the impersonal, anonymous behavior that comes with it) strips people of such empathy. “The quickness with which conversations become uncivil really bothers me,” he says. 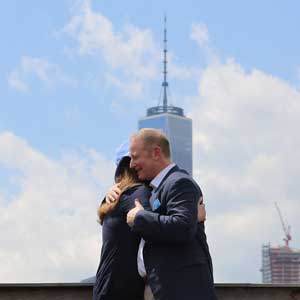 As each September comes to an end, most Americans move on from the somber anniversary until the following year. But Anderson, Maroney, and many others who made it through that terrible day hold it with them all the time. Anderson had been in New York in 2001 for an annual meeting of the National Association for Business Economists. He was representing his consulting firm, Anderson Economic Group, LLC, founded in 1996. He is still the principal and CEO of the firm today.

“I often think about the other people at the conference who escaped that day,” he says. “We surely would have some professional differences. We might have voted for different political parties. Some are probably U-M grads; some are not. But you never think about your differences when you realize you survived together. It should not take a tragedy to do this.”

To honor victims and those who risked their lives to help others that day, Anderson co-founded the nonprofit Michigan Remembers 9-11. The organization feeds his “survivor purpose,” he says. The Michigan Remembers site memorializes 19 people with connections to Michigan, including U-M alumni.

Anderson says he often recruits U-M graduates and has worked with the University in its capacity as a member of the University Research Corridor (which also includes Michigan State University and Wayne State University). His “Go Blue!” spirit runs deep: His wife is U-M alumna Madhu (Rustagi) Anderson, MPP ’84. Their son Neal recently graduated from the University with degrees in physics and music, and their son Sean is a sophomore at the College of Literature, Science, and the Arts.

Two years ago, Anderson opened a New York branch of the Anderson Economic Group. The site is about four blocks from Ground Zero.

“It didn’t hit me until I was there opening the office: It’s September 2016, and here we are,” Anderson says. “In many respects, it’s a small celebration of life.”