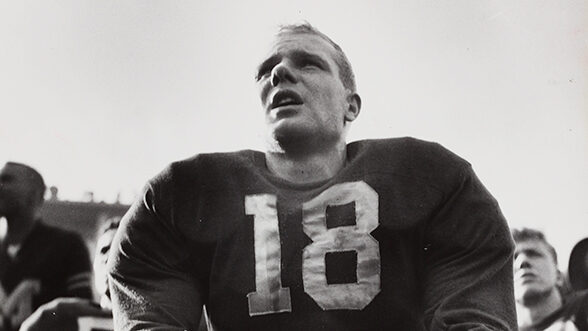 That frolicsome time of year

Here’s how Life set the scene:

“The autumnal calm of the campus was suddenly and noisily disrupted by an influx of cars, special trains, and private planes, all crowded with faithful alumni, patient wives, and plain fans. There for one sunny day the coeds were prettier, the chrysanthemums were bigger, and the old grads were more garrulous than they had ever been before.”

An installation at the University of Michigan Museum of Art (UMMA) provides a unique opportunity to view 21 images of that weekend, many not published in the article. John Harvith, BA ’69/JD ’73, and his wife, Susan Edwards Harvith, MMP ’73, donated the photographs to the museum. John had been working on campus many years ago when he unearthed the prints in the basement of a University building.

“I was working at U-M Information Services and writing music criticism for The Ann Arbor News when one day the U-M news writers were told that old news files were being culled and they could take whatever they wanted from the out-of-date materials on top of the filing cabinets. I walked over, leafed through the piles, and saw old Life magazine photographs among them. As a photography historian, I was immediately struck with their quality and decided to preserve them by adding them to our collection.”

(Click on the arrows on either side of the image. Photos by Lisa Larsen and Ralph Morse.)

Jennifer Friess, assistant curator of photography at UMMA, says the photographs, which are presented alongside a copy of the magazine loaned from U-M’s Bentley Historical Library, “depict fervent fans, strolling couples, alumni making their annual pilgrimage, and the game itself, and present Life’s view of a giddy postwar public enjoying a return to American pastimes.”

The spread is a delightful time capsule: women in hats and skirts, men with flasks and bow ties. Alumni young and old share steins of beer, tailgate in the shadow of a much smaller Big House, and generally horse around as people do on football Saturdays. According to Life, the 1947 homecoming game was a nail-biter. Though Michigan was expected to win, Minnesota did not make it easy, and the Wolverines squeaked out a 13-6 victory in the fourth quarter.

Some 70 years have passed but the Life magazine writers could have been on campus this fall, as their timeless prose conveys the sweetness of an autumn weekend in Ann Arbor:

“By tradition, Michigan’s homecoming festivities start on the eve of the game, and by tradition they are launched by a mammoth bonfire. This year’s bonfire, on a practice field right next to the stadium where the game was to be played next day, was fanned by a brisk wind. As it lit up the sky, students poured out of their fraternity and sorority houses, crowded about it lighting torches, snake-dancing, and exercising their lungs for the afternoon to come.”

The photographs from that weekend are on display at UMMA through Nov. 18, 2018.

The Harviths’ gift is in memory of their mentors, Jean Paul Slusser and Charles Sawyer.

A portion of this article originally appeared in UMMA magazine.