‘He felt what we felt’ 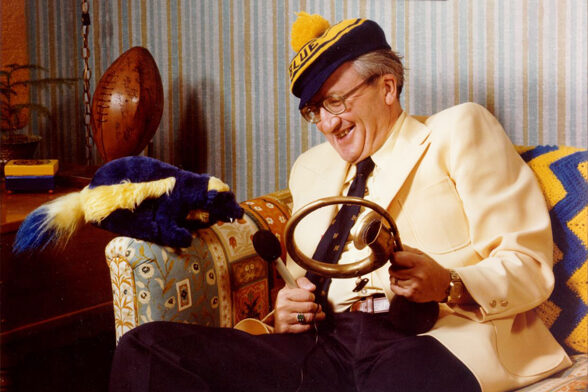 Documentary filmmaker Dan Chace’s keen interest in Wolverine football history began as a youngster growing up in Ann Arbor and attending games in The Big House. His 2012 documentary Perseverance: The Story of Dr. Billy Taylor (co-directed with Bob Hercules, MA ’84) recounted the “ups and downs” story of Wolverine Billy Taylor (running back 1969-71). The three-time All-American went to prison for robbery and lived on the streets of Detroit before turning his life around. Taylor went back to school, earned a doctorate, and founded a Detroit center for similar men in crisis. Perseverance drew wide praise for its inspiring and moving portrayal of a great U-M athlete who, seemingly down and out, makes a triumphant recovery. 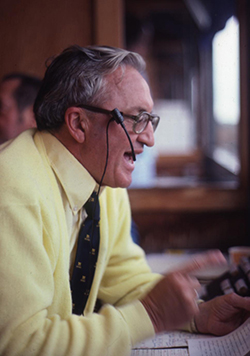 On Friday, October 5, Homecoming Eve for Wolverine football fans, Ann Arbor’s grand Michigan Theater will host the premiere of Chace’s second documentary Football’s Valhalla: The Bob Ufer Story. That endeavor has been a labor of love, a three-year journey to put the story of legendary football broadcaster Bob Ufer, ’43, on the screen.

Ufer’s presence in the Michigan Stadium radio broadcast booth from 1945 to his death in 1981 of cancer would become inextricably entwined with the fabled football program’s history. Fans deeply loved Ufer for his passion and unique style in calling games: dynamic, animated, colorful.

“His broadcasts were recognized as genuine emotional honesty,” Chace, BA ’83, told me during a recent trip to Ann Arbor. “He was joyous in Michigan victories, crestfallen when the team lost. Fans adored and respected Bob Ufer because in his broadcasts they could tell he felt what we felt. He was entertaining, engaging, funny, articulate. He was a broadcaster with a creative language, fond of military metaphors. Not unlike Shakespeare, he could generate words and phrases to express himself.”

That creative gift is evident in the source of Chace’s documentary title. Let’s flash back to the waning seconds of the 1979 U-M versus Indiana football game at the Big House. The teams are tied 21-21 with Michigan in possession of the ball, 45 yards away from the goal line with six seconds left on the clock. Quarterback John Wangler throws a pass to Michigan’s all-time leading receiver, Anthony-the-Darter-Carter, who darts into the end zone just as time expired. The score: Michigan 27-Indiana 21. The TD would stand as one of the most memorable in Wolverine history. The ever-partisan and fervent Michigan football radio broadcaster Ufer shouts into his microphone that the play must have been sent down to Bo Schembechler from “Football’s Valhalla.”  It’s a mythic, classic “Uferism” that remains one of the most memorable calls in sports broadcast history.

Buy your advance ticket for the Oct. 5 film premiere at the Michigan Theater’s website, or pick one up at the theater box office.
Chace launched his three-year production in November 2015 during the U-M vs. Ohio State game in Columbus, Oh. It was a freezing, bitterly cold day as Chace and his hired crew filmed “on-the-street” interviews outside the stadium. From that day, Chace estimates he made approximately 15 roundtrips between Ann Arbor and Los Angeles where he works as a producer-director at Black Point West Films.

In Ann Arbor, he gathered photos from U-M’s Bentley Library and Ufer family members. He also acquired critical assets from radio-video archivist Art Vuolo, who began recording Ufer in the 1970s. As a result of the research, the documentary touches numerous themes: radio history and culture, the impact of World War II, and Ufer’s connection to coaches Fielding Yost and Bo Schembechler and Athletic Director Don Canham. 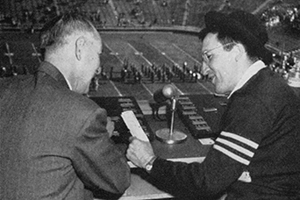 During his Ann Arbor visits Chace interviewed Ufer’s four children, former football coaches Jerry Hanlon, Lloyd Carr, and Jack Harbaugh, and Jack’s son — current U-M coach Jim Harbaugh. It’s an embarrassment of riches, he admits. “I created a problem for myself. To get at [Ufer’s] expansive story, I did something like 40 sit-down interviews.”

Many of the interviews included discussions of Ufer’s 1979 Valhalla reference and its possible personal and symbolic meanings for those working in the world of football. In mythology, ruling god Odin controls access to Valhalla, an afterlife hall-of-honor. Chace views the Valhalla pantheon as “a very big tent” that surely includes legendary U-M players, coaches, and their families, as well as members of the Michigan Marching Band and those unwavering Wolverine fans who regard Michigan Stadium as a metaphorical “heaven on earth.” And, of course, Bob Ufer. 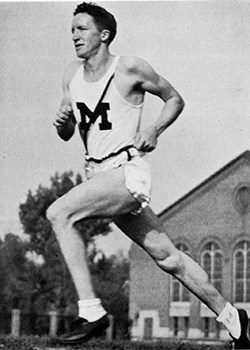 “For me,” Chace says, “the material derives from the subject itself, the setbacks and the comebacks. In the end, it’s the story of a life well-lived. I like films that celebrate the human spirit.”

Coping with poor eyesight dating to his childhood is one challenge that serves as a key arc in telling Ufer’s inspiring story. Although often having to wear eyeglasses while running field and track meets, Ufer had a remarkable running career that led to numerous titles and championships, All-American honors, and a 1943 world record in the quarter-mile run. Football’s Valhalla includes previously unseen, pristine newsreel footage of Ufer running a meet at Madison Square Garden.

And though his poor eyesight disqualified Ufer from military service during World War II, he contributed to the war effort through volunteer work with the V-12 Naval College training program at U-M.

Though Chace says making the documentary “was sometimes grueling,” he can cite many thrilling aspects to the process: finding and including the rare footage of Ufer at Madison Square Garden; listening to Harbaugh draw an analogy between Ufer’s enthusiasm for Michigan football and his own; and observing the interaction and support of Ufer’s four children. Returning to his hometown Ann Arbor “to revisit familiar landmarks from my younger life” fed his creativity during the filmmaking process. 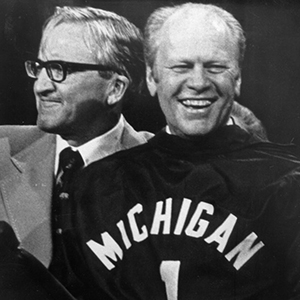 It was a pleasure talking with Chace, and for both of us it was somewhat of a walk down memory lane. I first attended football games at Michigan as a graduate student in the late 1960s, right about the time Chace got hooked on Ufer and the Wolverines. I recalled to him that I found it odd to see fans around me holding small portable radios to their ears. I came to learn they were listening to Ufer call the game. Chace recalled that too.

We also conjured up the magical, circus-like atmosphere that began in Michigan Stadium after the 1969 victory over Ohio State. It’s hard to imagine now, but Brandy and Whiskey, two little dogs, were trained to push a soccer ball from end zone to end zone. Fans roared with every “touchdown.” A unicyclist showed off his balancing maneuvers on the field at halftime. And there’s nothing like the special thrill of watching alumni band members and cheerleaders return to strut their stuff on Homecoming Day.

Dan Chace is a gifted, humane, and dedicated documentary filmmaker. His Football’s Valhalla: The Bob Ufer Story promises to be an ideal entree to Homecoming 2018. Try to get to the Michigan Theater Oct. 5. You’re going to love this cinematic “blast from the past.”