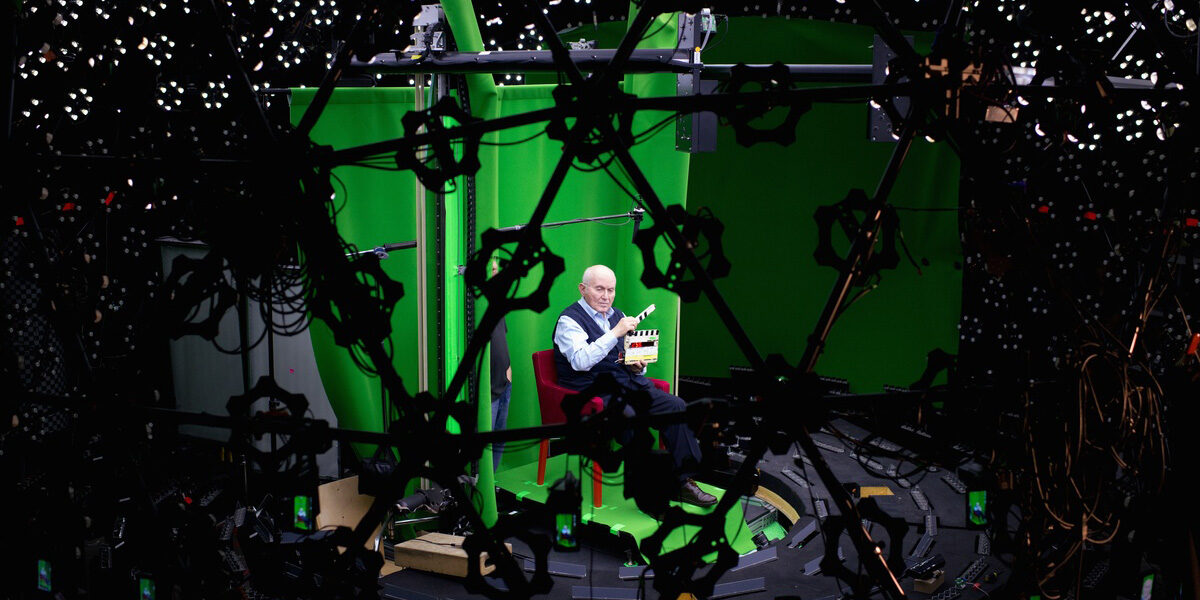 Silicon Valley finally appears “woke” to technology’s grip on the lesser angels of our nature. Shocking, but true: Leaders at Facebook, Twitter, and other digital empires now admit the unrestrained distribution of online vitriol, fake news, and antisocial extremism may not be such a winning formula for a high-functioning society. Big Tech’s “crisis of conscience” is in full effect, according to an Aug. 26 piece in The New Yorker. Executives in search of ethical guidance increasingly are flocking to New Age hideaways as they rethink their social media business models.

Sam Gustman, BSCE ’92, could teach them all a thing or two. As chief technology officer of USC Shoah (Holocaust) Foundation at the University of Southern California, the engineer regularly surveys his digital peers and wonders: “Are you working toward dehumanizing folks or are you working toward a more peaceful world?”

For Gustman, who once worked on “things that had to do with weapons” for the Army Corps of Engineers, the answer is a no-brainer.

“Genocide and hate are a growth industry at the moment, and that is very unfortunate,” he says. “Our goal at USC Shoah Foundation is to have people kill each other less.” 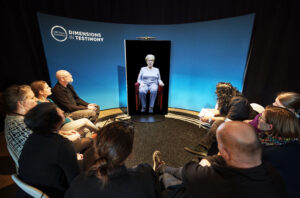 USC Shoah Foundation, established in 1994 by director Steven Spielberg, evolved from the Holocaust film Schindler’s List. During the movie’s production, Spielberg heard from many Holocaust survivors, inspiring him to found the nonprofit Shoah Foundation to find, record, archive, and present as many eyewitness testimonies as possible.

The original investment was about $300 million and the foundation covered 56 countries. Back then, a terabyte of storage cost $1 million; today that same terabyte costs about $10. USC Shoah Foundation’s Visual History Archive now holds 55,000 testimonies in 43 languages across 65 countries. The archive holds personal accounts of the Armenian Genocide (1915-1923), the Nanjing Massacre (1937), the Genocide Against the Tutsi in Rwanda (1994) and the Guatemalan Genocide (1978-1996), among others.

The testimonies generally include a complete personal history before, during, and after an interviewee’s firsthand experience with genocide. The accounts are profoundly moving.

“There’s a lot of truth we’re capturing in terms of people’s memories and their stories,” says Gustman. “It’s important so people understand the effect of their decisions.”

Despite the eyewitness accounts of these heinous atrocities, Gustman is optimistic that putting the organization’s content in front of people will transform hate into humanism. As one Holocaust survivor notes in his testimony, “Every time I talk and every time you listen to me, a part of me is embedded in you.” 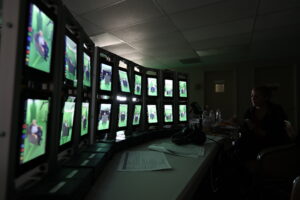 Multiple angles present a “volumetric” experience that allows users to have a conversation with the subject. (Image courtesy of USC Shoah Foundation.)

USC Shoah Foundation’s unique take on digital humanism often begins with an elaborate video shoot. Survivors of genocide are seated inside a mobile rig outfitted with 24 cameras. The individual answers thousands of questions over a series of days. Technicians run the interview through a mind-boggling array of artificial intelligence and language-recognition software.

The finished product is a sublime combination of humanity and next-generation technology that allows users to “converse” with a recorded individual on a screen. Using a microphone linked to the system, one can ask almost any question about the survivor’s experience. What do you remember about the day you arrived at Auschwitz? What are you most afraid of? What is your favorite color?

“We wanted to preserve this history as much as possible by creating an interactive and volumetric experience for those who don’t have a chance to meet [the survivor] in person,” Gustman says. (Volumetric is defined as showing or creating something in three dimensions.) “We thought, ‘What would interactive testimony look like when you start taking Alexa- or Siri-like technology and mixing it with an oral interview?’

“Turns out it’s incredibly captivating,” he continues, “and you’re able to have a conversation with someone who’s not there, as if they were. So instead of just watching their story, which is important, you can interact with their story at the pace and direction you’d like. It’s really quite amazing.”

“I had one professor who told me, ‘It’s important you build things that matter.’ That always stuck with me.”

Gustman is confident these volumetric experiences will be common one day, optimizing online learning and fostering empathy and human connection. He foresees a time when users will bypass online lectures and passive how-to videos and converse “face to face” with an actual (albeit recorded) individual.

The man-on-the-moon goal is to perfect holographic technology so that one day, a three-dimensional survivor may appear to be sitting in the room with you sharing their personal story of resilience.

“We need the Internet to catch up with us,” Gustman says. “Because right now, it’s best at text, which is a 5,000-year-old technology and one that can be incredibly dehumanizing.

“I mean, just look at Twitter. It’s the id of everybody out there. People are angry. [The perceived enemy] becomes ‘not human’ very, very quickly.” 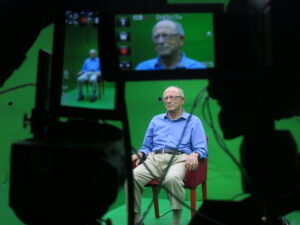 Storytelling as pedagogy is nothing new. But USC Shoah Foundation’s storytelling approach is groundbreaking, to say the least. Its Visual History Archive hosts 116,000 hours of digital testimony indexed down to the minute. One could type the word “food” in the archive search field and gain access to some 31,000 video interviews in which food was discussed. Select a specific interview and input an indexing term like location or time period and the clip jumps to the exact point in that interview. Maps, slideshows, primary sources, and other assets are hyperlinked across the system to reveal connections and inspire new fields of inquiry. The names of the 1.95 million individuals mentioned in the archive also are indexed and searchable.

U-M is among the 155 subscribing institutions across 15 countries. Partial access is granted to some 232 additional organizations, and individuals outside the subscriber base also have limited access.

Programs reach half the high schools in the U.S. through a partnership with Discovery Education and the program IWitness, a platform that allows educators and organizations to create and share lessons and lesson plans. Tools help students and scholars create and share their own content. And in response to the white nationalist rally of August 2017 in Charlottesville, VA, the organization launched Stronger Than Hate, to draw on the power of eyewitness testimony to help students and the general public recognize and counter antisemitism, racism, xenophobia, and other forms of hatred.

Gustman’s next objective is to perfect a model for machine teaching — tracking how users interact with technology to ensure they reach a desired programmatic outcome.

“So if someone says something terrible on one of these social networks, you could send them content that would possibly get them to humanize whomever they’re hating and calm down a little bit,” he says.

To infinity and beyond

“We thought, ‘What would interactive testimony look like when you start taking Alexa- or Siri-like technology and mixing it with an oral interview?’ Turns out it’s incredibly captivating.”

In 2006, Spielberg moved the organization to the USC campus, where it continues to expand.

In addition to shooting original content, USC Shoah Foundation gathers and catalogs interviews that live in museums and institutions around the world. About a thousand testimonies are housed at the Holocaust Memorial Center Zekelman Family Campus in suburban Detroit, he says.

It’s critical these assets are preserved properly, and Gustman is keeping pace with changes in technology to ensure the collection remains viable for future generations. It’s not as easy as it sounds, he says. “The newer the technology, the faster it seems to be rotting.”

Gustman also is associate dean of USC Libraries, and has applied the foundation’s digital strategy to other university programs that have nothing to do with genocide. Warner Bros. keeps all of its digital TV and film archive with USC and the library just won a contract from the U.S. military to process all of its audiovisual imagery that is not classified.

“It’s very synergistic with the mission of engineering and libraries, as well as the mission of [USC Shoah Foundation], which is to teach using information from these archives,” he says.

It’s also very synergistic with Gustman’s life goals. As a student in U-M’s computer engineering program in the early ’90s, he looked up to digital libraries expert Daniel Atkins as a mentor. (Atkins is professor emeritus of information in the School of Information and professor emeritus of electrical engineering and computer science in the College of Engineering. He was the first dean of the School of Information, which didn’t exist until after Gustman graduated.)

“I had one professor who told me, ‘It’s important you build things that matter.’ That always stuck with me,” says Gustman, who has been with USC Shoah Foundation for 25 years. “I was working at the Army Corps of Engineers after graduation and all of a sudden I’m working with Steven Spielberg on making the world a better place. I consider myself one of the luckiest engineers on the planet because of that.”

DEBORAH HOLDSHIP is the editor of Michigan Today. She joined the University in 2007 as editorial manager in the marketing communications department at the Ross School of Business, where she was editor of Dividend magazine for five years. Prior to working at Michigan, Deborah was associate director of publications at the UCLA Anderson School of Management. From 1988-2001, Deborah worked in the entertainment industry in Los Angeles, where she was a reporter and editor at Billboard magazine and an associate editor and video producer at LAUNCH media. Follow her on Twitter: @michigantoday.
Social
Share on: Share on Twitter Share on Facebook