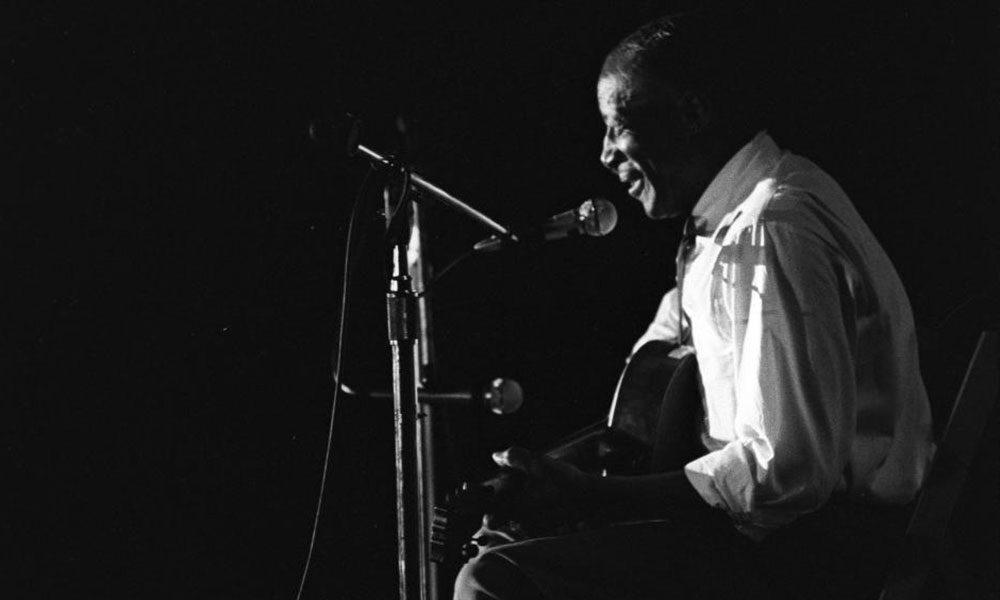 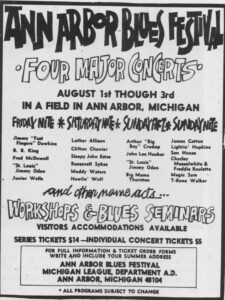 “A diamond in the rough is so legitimately rare, and that’s what we have here.”

The “rough” refers to nearly 17 hours of original live recordings, made as a personal memento by a young fan with a portable reel-to-reel machine.

“This is the most DIY record you could possibly release,” says Blackwell, from Third Man’s Nashville headquarters. “It’s one fan pointing a microphone at the stage.”

Fortunately, that one fan and his microphone had the wisdom to store the tapes properly for decades. So when his son discovered them in a basement in 2009, they still sounded pretty good. And let’s be honest: Fidelity is not the point here. The fact that the audio exists at all is kind of a miracle.

“[The Ann Arbor Blues Festival] was not some elaborate, corporate-sponsored idea had by marketing men,” says Blackwell, a Detroiter by birth. (Third Man has an outpost there.) “This was a concert put on by a bunch of kids and captured by people even younger than those kids.” 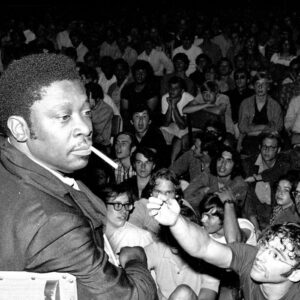 “I had no idea what [the tapes] were at first,” says Parker Fishel, who brought them to WKCR at Columbia University where he was working at the time. It didn’t take long for him to identify what he heard.

Parker’s father, Jim Fishel, had made the amateur recordings in August 1969. Jim was a teenager supporting his older brother, John Fishel, BA ’70/MSW ’73, the entertainment co-chair of the original Ann Arbor Blues Festival (Aug. 1-3, 1969). Jim Fishel and his friends lugged around a Norelco recorder and taped about 16.5 hours of performance over the course of the weekend — in front of the stage, behind the stage, in the photo pit. The atmosphere was intimate, accessible, and convivial, almost like a family reunion.

“Magic Sam was the breakout star; he called it an all-star game,” says Parker Fishel, who produced the Third Man release with his father. “B.B. King was at the height of his power. There was so much talent there. Everyone was just trying to up the ante, so you got all these explosive performances.

“But it’s also the banter between the artists and the audience that makes it charming,” he continues. “The musicians don’t care that it’s a bunch of white kids. As long as you had a genuine interest, they figured, ‘Well, these are the people who are carrying the torch.’ I think they respected that, which is probably why they were so kind and open. You can hear them gently educating the crowd.”

That education continued offsite with raucous sessions at the Michigan League, like the time B.B. King jammed with barrelhouse pianist Roosevelt Sykes.

Not just a “greatest-hits”

The festival organizers always intended to produce more than a concert and the album reflects that. The 24 tracks play like a crash course in the genre, bringing sounds from the Mississippi Delta, the Louisiana Bayou, and the streets of Chicago. They represent the Houston sound, the Big Band West Coast sound, and so much more. The collection’s final running time is about three hours.

This was the first time anyone looked at the blues writ large — not blues-rock, not folk-blues, but just the blues, Parker Fishel says. “These college students had the foresight and audacity to show you just how diverse the blues is rather than hold it up as a monolithic thing. That is really impressive to me. It’s not just the blues music. It’s the blues culture.”

The cover shot on America’s first blues publication, Living Blues (Sept. 1970), featured Howlin’ Wolf in Ann Arbor (by Les Blank). It seemed the blues pump was primed and the 1969 festival was the tipping point. 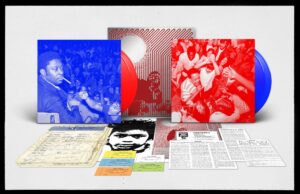 Upon realizing his father’s original tapes had value, Parker Fishel assembled a “dedicated team of student volunteers and a few skilled adults” at WKCR to transfer, restore, and preserve the audio. Degradation was minimal, and, as Blackwell puts it, “Parker was methodical. He didn’t want to monkey too much with the sound. He wanted to retain the spirit of the performances.”

Next came the task of identifying the artists and songs, and researching press accounts and reviews to recreate the festival running order and set list. (Sykes opened.) Feeling that the recordings deserved a wider audience, Parker Fishel formed Americana Music Productions. A colleague hooked him up with Third Man Records, and he and his father pitched the label on the collection.

“We had a big discussion about it and, in no uncertain terms, told them we were interested,” says Blackwell. The timing was fortuitous. The 50th anniversary of the festival was a few years down the road, and it would take a while to track down each artist’s estate and clear the rights.

“We cleared the last person in July, just as we were pressing the record,” Parker Fishel says. “I found Shirley Griffith’s son by happenstance on Facebook.”

The live recording is packaged as a 24-track, two-CD set; two double-LP sets (Vol. 1 and Vol. 2); and a deluxe, limited-edition, four-LP set in colored vinyl. 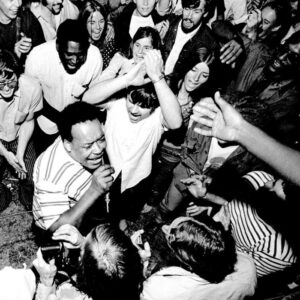 The Ann Arbor Blues Festival looms large in the University’s lore. Now those memories have a soundtrack. Festival volunteer Ken Whipple, BA ’69/MHSA ’77, was quick to purchase the double-CD set and the collector’s edition of colored vinyl.

“I was surprised by the recording; it was far superior to what I expected,” he says. “I’m really appreciative that John’s nephew put this together. It’s really impressive.”

Whipple treasures his memories of the camaraderie that developed so easily between the artists and the students. Highlights include road-tripping to Chicago with John Fishel (“the heart of the festival”), visiting Delmark Records, and approaching a six-foot-tall woman in bib overalls and saying, “I’m looking for Big Mama Thornton.”

He even caught Mississippi Fred McDowell in his red silk pajamas. (McDowell’s tune “You Gotta Move” would show up on the Rolling Stones’ Sticky Fingers in 1970.) John Fishel hosted the artist overnight in his house near Crisler Arena, and in the morning he and Whipple heard music from the living room.

“[McDowell] was playing his electric guitar – unplugged – and singing the blues to no one but himself,” Whipple says.

Back to the beginning

Read more about the original Ann Arbor Blues Festival and its recent rebirth.
Third Man’s Blackwell wasn’t born in 1969, but the festival always has been on his radar as part of the cultural firmament unfolding in Ann Arbor at the time. He shares a tale that makes the hair on his arms stand on end.

Delta blues legend Son House, scheduled as the festival’s penultimate performer, arrived late to the gig because he was visiting family in Detroit. James Cotton had taken the stage in House’s absence. The organizers were preparing to end the event when House’s manager, Dick Waterman, made an impassioned plea to the crowd.

According to Blackwell, Waterman said something like, “OK, we’ve seen where the blues exists now, how far it’s come. “Now, let’s go back to where the blues started: with one man and an acoustic guitar.”

And then Son House walked out and performed “Death Letter Blues,” featured on the collection.

“If I had to describe why this record is important, that’s it,” Blackwell says. “That’s all you need to know.”