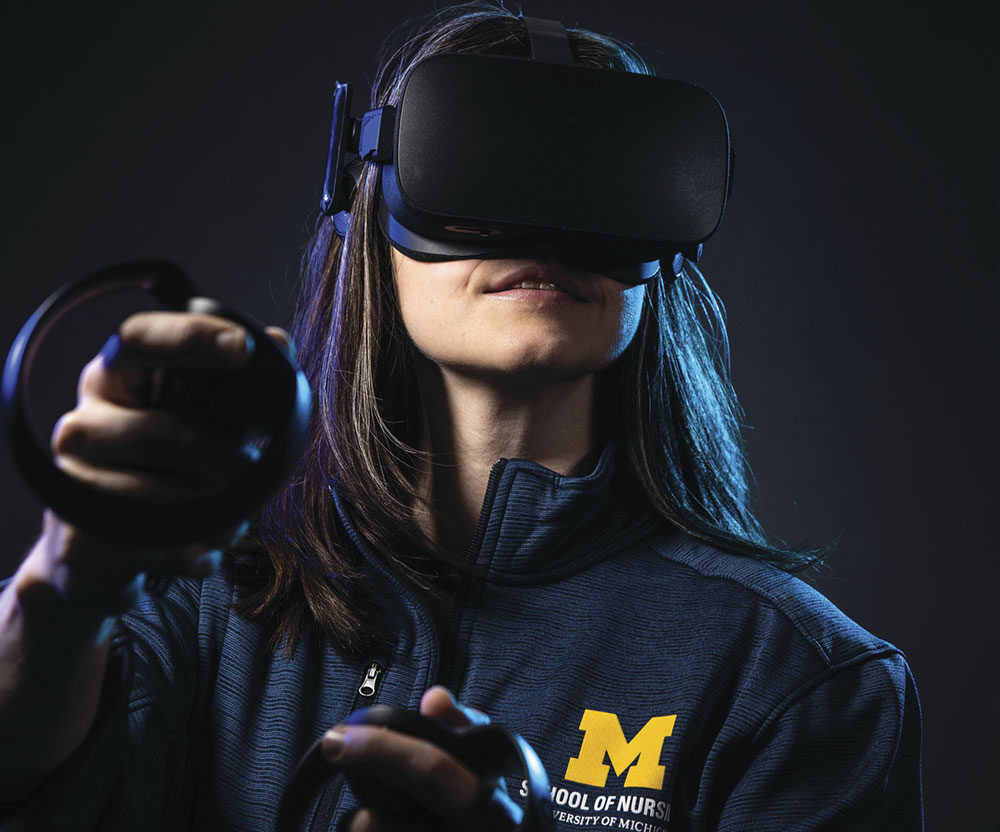 From Everest to the OR

Graduate nursing students had an unexpected destination during a spring course – Mt. Everest. They were experimenting with virtual reality (VR), many for the first time, in a class led by UMSN Clinical Associate Professor Michelle Aebersold, PhD/RN/CHSE/FAAN.

“You can’t be around a bleeding-out patient until a patient is actually bleeding out, so a virtual experience where you can actually see what’s going on could be amazing,” says DNP student Lindsey Freysinger.
“Everest” is a VR immersion experience in which participants try to reach the summit of the world’s highest mountain. Turn around to see 360-degree views of Mt. Everest’s stunning landscapes of white snow reflecting the bright sunlight, other climbers in head-to-toe winter climbing gear or perhaps an incoming whiteout that makes navigation feel nearly impossible.

To move in the simulation, you must move your body. In this case, it’s your hands holding controllers and mimicking the use of trekking poles to propel climbers forward through the deep snow.

“When I took my goggles off, I thought I was facing one way but was actually facing the other,” says Kari Szczechowski, a UMSN DNP student. “I was surprised at how real it felt.”

The authenticity of VR comes as a jolt to most first-time users. The lightweight goggles look simple but show crystal clear and bright images that immediately make the user feel as though they are in a new environment. The wraparound style of the glasses and integrated audio block out the surrounding environment, making it easy to become immersed. 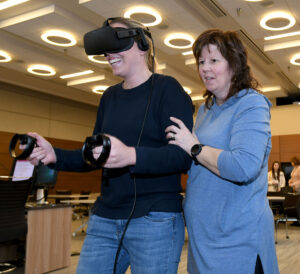 The Everest experience is an opportunity for students to become familiar with VR. The next step is a nursing simulation.

Aebersold, UMSN’s faculty lead for innovation, research and technology development, and Prashant Mahajan, MD/MPD/MBA, a Michigan Medicine professor, are piloting a VR program for nurses, physicians, and pharmacists working as a team to care for a pediatric patient experiencing cardiopulmonary arrest by using advanced life support algorithms and evidence-based practices.

“The focus is on graduate students because the simulation is geared toward learners who have work experience and an understanding of pediatric emergency care, as well as training in advanced life support or code team leadership training,” explains Aebersold. “Undergraduate students don’t have this experience yet.”

“I think you need to be hands-on to learn the best in some ways,” agrees Elle Porteous, a DNP student who works in an intensive care unit. “But VR could be really useful in many other learning scenarios because it could make it more authentic.”

Aebersold’s pilot project evaluates core goals such as students adhering to guidelines, decreasing errors, and improving patient outcomes. The project will have 10 teams of learners, each with four participants. After the simulation, Aebersold will use the Communication and Teamwork Skills Assessment to measure team performance.

Read more about Michigan’s efforts to advance its work in extended reality, or XR, through a campuswide initiative.
“I have always been interested in gaming as a way to learn,” says Aebersold. “In the past, I used computer versions of virtual worlds, such as Second Life, to create simulations where students can learn together while logging in from various locations.” 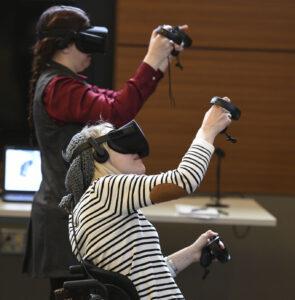 Lindsey Freysinger (in stripes) had tried an early version of VR, but says this experience was more detailed. (Image: Michigan Photography.)

“You can’t be around a bleeding-out patient until a patient is actually bleeding out, so a virtual experience where you can actually see what’s going on could be amazing,” says DNP student Lindsey Freysinger. “In simulation, the mannequin always looks the same and you don’t actually see the suction containers filling with blood and things like that. Virtual reality could help prepare you for that sense of urgency.”

In addition to teaching new techniques, the students suggested VR could be used to help practicing nurses keep their skills up to date.

“It could be a safe environment for high-risk, low-volume events,” says Szczechowski, who currently works as a local hospital’s Magnet Program Coordinator. “I’m thinking of my nurses and certain things they say they haven’t had to do in a long time. Virtual reality could be used to keep those skills current.”

As the students in Aebersold’s class began seeing the possibilities of VR, it didn’t take long for them to start thinking of patients. Freysinger was able to draw on her own perspectives as a nurse and a spinal cord injury patient.

Aebersold was selected for the 2019 International Nursing Association for Clinical Simulation and Learning (INACSL) Excellence in Research Award: Advancing Research in the Field of Nursing Simulation & Clinical Laboratories. She was selected for her work “pioneering virtual simulation methods, mentorship of others in simulation-based research, and ongoing dedication to build a comprehensive research program for improving patient safety.”

“A lot of my issues are around spasticity, but I wonder if early on VR could have helped to rewire some of those connections and train my brain to think about things differently,” she says. “When I was learning how to reopen my left hand, we put it inside a box, had my right hand outside the box and used a mirror. I opened up my right hand and that made my left hand open. VR could be used for something like that.”

“I could see this being very useful for any skills that use muscle memory,” says DNP student Heather Melville. “For example, if someone needed to work on their walking stride, maybe after a stroke or something like that, I’d like to see what could be done to get them on a treadmill and help them get that sensation with their legs.”

“I’ve seen rehab videos where they use VR to help amputees with phantom limbs and learning how to walk with prosthetics,” says Freysinger. “With VR, they can see normal feet instead of the prosthetic and that can help them get used to their prosthetic faster because the brain is seeing normal anatomy.”

“I think it could also be very useful for practicing certain patient interactions,” adds DNP student Brooke Lehmann. “For example, de-escalations with an aggressive patient or family member. VR could add authenticity that you don’t necessarily get if you’re practicing with your professor or a classmate.”

Business for the greater good 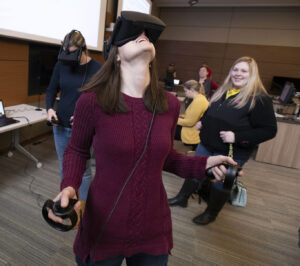 Things are looking up in nursing education. (Image: Michigan Photography.)

Virtual reality has become a multibillion-dollar industry with applications in entertainment, business and athletics. Oculus, one of the leading VR companies, created VR for Good, an initiative “designed to support content creators, impact innovators and inspire partners who see virtual reality as a way to make the world a better place.”

One of the initiative’s focus areas is on health. Oculus awarded Aebersold with a grant worth nearly $100,000 and donated four sets of Oculus Rifts to support her pilot program.

“VR is going to be a large part of our future training technology,” says Aebersold. “There are not enough simulation labs and space to fit all of the needs, and VR will address those needs. Nursing can be a leader in this space just as we have been a leader in health care simulation.” 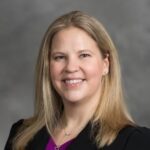 JAIME MEYERSis the former editor of the School of Nursing's magazine, Panacea. Prior to joining U-M, she was a television reporter and editor. In 2019, she left U-M and is now a student at Harvard University's Graduate School of Education.
Social
Share on: Share on Twitter Share on Facebook