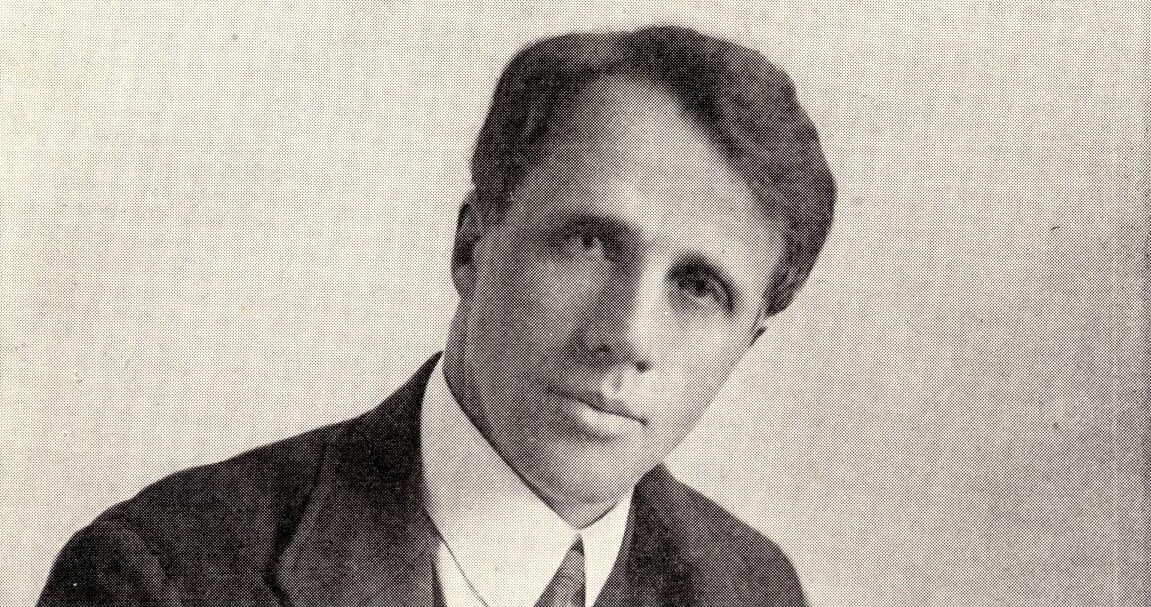 In spring 1926, students in Robert Frost’s poetry seminar crowded the parlor, study, and kitchen of the artist’s white clapboard house on Pontiac Trail. Frost’s guests likely included some of his local admirers, as well as participants in U-M’s literary magazines, Inlander and Outlander, and their faculty adviser, Roy Cowden.

The poet recently had been awarded his first Pulitzer Prize for the book New Hampshire (1924). On this particular night, the boldest among his students hoped to share their work and survive his critiques.

During his time at U-M, Frost “got to be a good deal more Ann Arboreal than I should suppose I could have at my age.” Read more about Robert Frost in Ann Arbor.
Frost was in Ann Arbor fulfilling a fellowship (1925-26) at the invitation of his late friend, Marion LeRoy Burton, a former pastor and U-M’s sixth president. Burton, an ardent supporter of the arts, initially brought the poet to campus in 1921 as the University’s first Fellow in the Creative Arts and would spend the next few years fundraising to create a permanent fellowship for Frost.

In the fall of 1924, Burton announced that Frost had accepted Michigan’s offer to return “forevermore” as a Permanent Fellow in Letters, beginning the following fall. Sadly, Burton died in February 1925.

Fortunately for his local admirers, Frost had enjoyed his previous experiences at U-M. He followed through on his agreement with Burton and moved into the modest Greek Revival house across the Broadway bridge in fall 1925. This is where he hosted his poetry seminars and composed some of his best-known works, including “Spring Pool,” “A Winter Eden,” and “Acquainted with the Night.”

In 1926, the poet left “the Frost House” for good and returned to a permanent faculty position at Amherst College. Years after Frost departed, industrialist Henry Ford purchased the home with plans to relocate the structure to Greenfield Village, the outdoor museum of American ingenuity he was creating in Dearborn. The auto baron thought the house, built in the 1830s, was a fine example of Greek-Revival architecture. 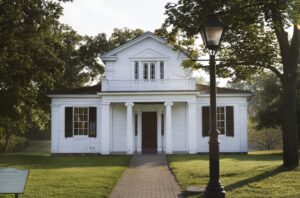 Initially called the Ann Arbor House, the poet’s former abode served as classroom, gallery, and exhibit space in the village and didn’t become a permanent historical display — like other buildings — until 1959, staged with mid-19th-century furniture. Except for an audio recording of Frost reciting one of his most famous poems, “Stopping By Woods on a Snowy Evening,” little has been made of his time inside its walls.

All that is changing, though, as representatives of The Henry Ford and advocates with ties to U-M have recognized the home’s historical significance and inspirational possibilities. Plans are in the works to establish the house as a center of American literary creativity, not only honoring the man who once lived there but also building a bridge to inspire future writers.

The home, located in the Village’s Porches and Parlors District, already has served as the centerpiece of what has become the annual Literary Feast: An Evening of Frost and Food each September, complete with poetry readings, discussions about literature and Frost, and dinner.

Paul R. Dimond, JD ’69, a member of The Henry Ford Board of Trustees, told guests during one of the recent events: “More than just pretty, Frost House is still in the process of becoming: A living legacy for America’s greatest poet of the 20th century, to engage visitors in experiencing Frost as he lived, composed, spoke, and shared his poems in the spring of 1926.

“It is a place to welcome the great poets of our time,” he continued. “And soon, [will be] a center to inspire young poets to create great poems for generations to come.”

In 2018, Dimond contributed the essay “Frost and Burton at Michigan, 1921-26, Then and Now,” to The Michigan Quarterly Review. Enjoy!

Dimond is the author of the 2017 novel The Belle of Two Arbors (Cedar Forge), which chronicles Frost’s time at U-M. Frost House now welcomes artists to share their work at each September celebration. Guests have included Detroit-born Tyehimba Jess, who won a Pulitzer Prize for his second book, Olio; Gregory Pardlo, whose collection, Digest, won the Pulitzer Prize for poetry in 2014; and Detroit-native Vievee Francis, who describes herself as a “poet in Robert Frost’s direct lineage.”

The Frost connection was formally attached to the house around 2000. Jim Johnson, curator of historic structures and landscapes at The Henry Ford, says a main goal is to improve the visitor experience at the house. Except for the foyer, the rooms of the house currently are partitioned by glass walls and are off-limits to visitors.

“It’s a bit confusing for people coming into the house,” Johnson says. “Down the road, we’d like to lift up the Frost experience there. We may not do the house over in the period in which he lived there but more broadly with a literary connection to the Village.” 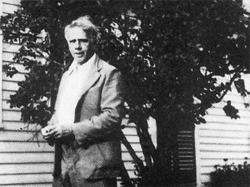 Robert Frost at the house on Pontiac Trail, where he lived during one of his stints in Ann Arbor. (Image courtesy of U-M’s Bentley Historical Library.)

While the house is not livable because of the lack of modern-day plumbing and structural issues, a potential poet-in-residence could stay at the nearby Dearborn Inn and host workshops inside the house, meeting regularly with students in the parlor, much like Frost did. Other options include reconfiguring a second-floor room into a secluded writing studio; offering poetry workshops in afternoons and evenings; and presenting poetry slams for children.

If such prospects seem a bit unorthodox for a history museum, advocates look to Frost for inspiration. His tenure at U-M was unusual too. Burton originally lured him to Ann Arbor as a non-teaching “Fellow in Letters,” an uncommon practice at the time.

“He was the talk of the town when he came to Ann Arbor,” Dimond says. “He was brought here to be inspiring and creative to others. He didn’t have to teach a class and a lot of academic types didn’t like that.”

When he departed Michigan for Amherst, it was for a non-teaching position. Frost maintained his personal and literary connections at U-M and returned several times over the years. In the spring of 1962, he made a triumphal visit to Ann Arbor, where, during a special convocation, he shared his poems and memories with a packed house at Hill Auditorium.

Then 88, Frost recalled affectionately that “little house on Pontiac (Trail). It was a very pretty little thing made altogether of black walnut. It was what is called a hen-and-chicken architecture … a very charming house.”

At Commencement a few weeks later, President Harlan Hatcher bestowed a Doctor of Laws Degree on Frost, “as a public personage and a statesman by virtue solely of the exercise of poetic genius.” Frost won four Pulitzer Prizes during his career.

“Robert Frost is a notable American poet,” Johnson says. “His relevance continues and I think it’s important we move ahead with our plans. When we bring people down and show them the house, the connection is definitely made. They find it inspiring.”

GREG TASKER is a freelance writer and editor who has worked for the Detroit News, the Baltimore Sun, and the Chicago Sun-Times. He is the author of Five Star Trails for Ann Arbor and Detroit (Menasha Ridge Press, 2011) and Sanders Confectionery (Arcadia Publishing, 2006).
Social
Share on: Share on Twitter Share on Facebook