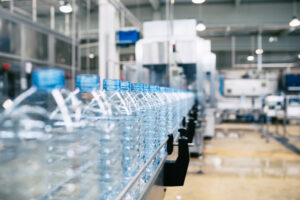 Remember studying the different “epochs,” those periods of time in history typically marked by notable events or particular characteristics? We had the Stone Age, the Bronze Age, the Iron Age. That’s how we learned about the development of different civilizations and cultures. The study focused on the ways humans used the environment to develop tools and resources to support population growth and control their destiny.

Welcome to the Anthropocene

The Anthropocene Epoch was first introduced by Paul Crutzen (1955 Nobel Prize in Chemistry) to describe the period in time during which human actions have had a drastic effect on the Earth and its ecosystems. This includes anthropogenic climate change (relating to, or resulting from the influence of human beings on nature) and its impact on the Earth. The Anthropocene also has become known as the plastic age, defined by plastic pollution everywhere.

Experts suggest this new epoch originated around the 1950s and defines by some of the following:

Evidence now appears undeniable that the Earth has been so profoundly changed (by humans) that the Holocene Epoch (current geological epoch that started about 12,000 years ago, after the last glacial period) is giving way to the Anthropocene Epoch.

Evidence of the Anthropocene

The term “microplastics” was introduced in 2004 by Professor Richard Thompson, a marine biologist from the United Kingdom. Two classifications of microplastics currently exist.

Both types are recognized to persist in the environment at high levels, particularly in aquatic and marine ecosystems.

Microplastic can be found virtually everywhere in our environment.

In 1907, Belgian-American chemist Leo Baekeland developed the first synthetic plastic, Bakelite. He patented Bakelite in 1909. This marked the beginning of the global plastic industry. Rapid growth in global plastic production exploded in the 1950s. Over the next 65 years, annual production increased nearly 200-fold to 381 million tons by 2015, roughly the weight of two-thirds of the world’s population.

Plastics are nearly impossible to avoid for anyone living in the U.S. Plastic lines soup cans, leaches out of storage containers, hides in household dust, and is found inside toys, electronics, shampoos, cosmetics, and countless other products. It’s used to make thousands of single-use items, from grocery bags to forks to candy wrappers to the much-maligned plastic straw.

Because research into microplastics and health outcomes is so new, there’s not yet enough data to say exactly how they’re affecting long-term human health. However, research suggests chemicals found in different plastics link, casually or causally, to several health problems, including reproductive disorders and obesity, plus hormonal problems and developmental delays in children.

How much plastic do you ingest? 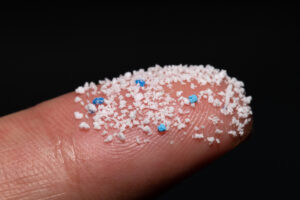 We take in plastic particles through any number of activities. We swallow them through drinking water and eating fish that contain microplastics. We absorb them through the skin via cosmetics or lotions. And we inhale them in the air particles we breathe.

One research review calculated that just by eating, drinking, and breathing, the average American ingests at least 50,000 microplastic particles every year. Other estimates suggest a far higher value. One study found the average person consumes about 5 grams of plastic a week — the rough equivalent of a credit card.

Some researchers hypothesize that chemicals used to make plastics act as a vector for pathogens, as well as heavy metals. Evidence from several animal studies and some human research suggests these microplastics can cross directly into the bloodstream — that means mothers can pass microplastics through the placenta to a developing fetus. And once these chemicals enter the body, even in low doses, they can have detrimental health effects.

Another reason to pass the salt
Researchers tested three types of table salt samples and found the presence of microplastics in all of them. Sea salt was found to have the highest amounts of microplastics (polyethylene terephthalate, or PET) compared to lake salt and rock/well salt.
For example, bisphenols, a group of chemicals used to manufacture plastics, epoxy resins, and other products, are known to interfere with human hormones. These studies link bisphenol exposure to reduced fertility in men and women. Phthalates, a group of chemicals used in hundreds of products such as toys, vinyl floor- and wall coverings, detergents, lubricating oils, food packaging, pharmaceuticals, tubing, and personal care products are known to disrupt hormonal function.

Also, prenatal exposure to phthalates links to lower testosterone in male offspring. Still another chemical, styrene, found in plastic and some food packaging links to several health issues, including nervous system problems, hearing loss, and cancer. BPA (bisphenol A), an industrial chemical used to make certain plastics and resins to harden plastic, are thought to cause a wide range of disorders including cardiovascular disease, type 2 diabetes, and abnormal liver function.

The flame retardant Tetrabromobisphenol A (TBBPA), used in many different types of plastics found in microcircuits, links to disruptions in thyroid hormones, pituitary function, and infertility in lab rats.

In 2018, the American Academy of Pediatrics (AAP) released a report saying chemicals, including bisphenols and phthalates, may put children’s health at risk. The researchers recommended families reduce exposure to these chemicals.

Reducing your exposure to plastic

Here are a few suggestions to reduce your ingestion of microplastics. 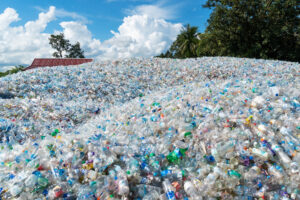 Industry estimates show plastic production is expected to quadruple by 2050. This represents a major health crisis. Each of us can limit our plastic exposure by opting for products packaged in glass instead of plastic, using reusable non-plastic containers whenever possible, and support regulations and policies limiting the use of single-use plastic, including polystyrene foam cups and containers, plastic bags, and straws.

The momentum for state and federal action on single-use plastics is taking off. In 2019, Maine, Maryland, and Vermont become the first states to ban plastic foam containers. Connecticut, Delaware, Maine, New York, Oregon, and Vermont joined California in banning single-use plastic grocery bags – tripling the number of single-use-bag bans in just two months. And California and Vermont passed statewide bills requiring plastic straws be given only upon request at restaurants. Also, at least 10 cities/counties in the U.S. have ordinances that ban and or place fees on plastic-bag use

Sadly, Michigan has yet to pass regulations on plastic-bag use. In 2016, lawmakers actually passed legislation banning local communities from banning plastic bags and other single-use containers. But just recently, House Bill 4500 was introduced to repeal the 2016 law. So far, there has been no legislative action. So, initially there was a push to ban, and then a state law to ban banning, and now the legislators want to ban the banning of banning.

I’m not kidding, you can’t make this stuff up. Do you have any questions or suggestions about avoiding microplastics? Please share in the comments section below!