The Conference of the Parties 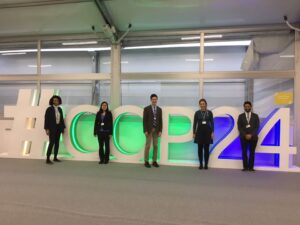 This December marks the 11th year that U-M will send a student delegation to the United Nations Conference of the Parties (COP) (Dec. 2-13, 2019). The COP is the supreme decision-making body of the United Nations Framework Convention on Climate Change.

Preparations for the trip to COP 25 in Santiago, Chile, got a bit complicated about a month ago when President Sebastián Pinera canceled the meeting due to political unrest in the country. The COP moved from Santiago to Madrid and the governments of Chile and Spain are scrambling to present as seamless an experience as possible.

I have been teaching a course with Avik Basu, lecturer in the School for Environment and Sustainability, to prepare our student delegates for the 2019 mission. Fortunately for me, Avik does most of the work, and he will lead our contingent.

Why send a student delegation? 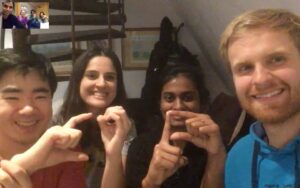 Back in 2009, a couple of students approached me about getting the University “observer status” at the COP meetings. Those same students had attended the 2017 COP in Bali on another university’s credentials. They witnessed firsthand the tedious machinations of forging international policy, but through the exhibits and side events they learned about vigorous efforts and emerging technologies worldwide. Several students made contacts that launched or influenced their careers.

Attending the 2009 COP in Copenhagen came with outsized expectations. I recognized the enormous value of putting climate science and engineering students on projects with students in business, policy, urban planning, and public health, indeed, students of all disciplines. Initially, I planned to expose just the natural scientists and engineers to the messy ways in which their work might influence public policy, planning, and management. But then students began to identify issues that crossed multiple disciplines, and it became clear that all of the students would benefit from making multidisciplinary connections.

But what of the United States at the COPs? 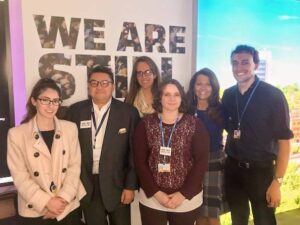 2017 COP Delegation: “We are still in.” (Image courtesy of Climate Blue Facebook.)

The Michigan student delegations have spanned the Obama and Trump administrations. We were riding a wave of excitement in the climate community in 2008-09, as the world seriously flirted with creating a market to manage carbon dioxide emissions. But that concept crashed and burned in 2009, and the United Nations regrouped with the ambitious Paris Agreement in 2015.

The Paris accord is an example of savvy policymaking to get all of the “parties” (i.e., countries) to agree on common goals that will limit planetary warming. These goals are voluntary, determined by each country, and, admitted by all, to be a mere starting point. The Madrid meeting in December is intended to put the final touches on implementing the Paris Agreement.

President Obama’s administration made some important but modest commitments on behalf of the U.S. These included the Clean Power Plan and vehicle emission standards deftly negotiated as part of the government intervention after the Great Recession. Both of these policies aligned with where markets were heading, and hence, opposition was minimal. However, Congress did not move on climate policy, so many of Obama’s efforts existed only in carefully crafted executive orders.

Our U-M students arrive at the COP in Madrid from a country whose federal policy position appears wrongheaded to most of the world.
When the Trump administration took office, it was so obvious what would happen that I described it in an editorial in EOS. Trump has since announced the intention of the U.S. to withdraw from the Paris Agreement on Nov. 4, 2020, one day after the U.S. presidential election. This withdrawal means the U.S. will be the only country not participating in the Paris Agreement. Our federal environmental policies have placed the U.S. in a remedial position based on where the scientific evidence says the nation should be. The policy chaos and underlying degradation of our scientific enterprise continue to chip away at our capacity to innovate and lead.

Our students arrive in Madrid from a country whose federal policy position appears wrongheaded to most of the world. We also are a country where many local governments, universities, corporations, and non-governmental organizations have vowed that We Are Still In the Paris Agreement. Understanding how to accomplish goals in challenging environments and gaining a realistic view of the advancing world are important reasons for students to experience the COP. 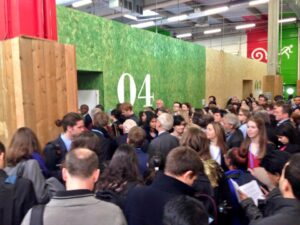 As stated in my first column, the name Climate Blue is shared with the student group built around the U-M delegation to the United Nations Conference of the Parties. As urgency and inaction on climate change collide, student activity is picking up in Ann Arbor and at U-M. Students are pressing for accelerating University action on climate change under the premise that universities should be leaders. U-M recently announced an initiative on Carbon Neutrality.

Students will engage the U-M community and their home communities throughout the COP venture. You can follow the student group Climate Blue on Facebook. Alumni can contact participating students at climateblueannarbor@gmail.com.

In the Winter 2020 term, a student-led symposium will deliver findings to the U-M community. The delegates would like to thank the School of the Environment and Sustainability, the College of Engineering, the Office of the Provost, and the Department of Climate and Space Sciences and Engineering for their financial support.