A few years ago, my father-in-law came over for a barbecue. He’s a real “foodie” — he wants his hot food hot, his cold food cold, and he likes his meat cooked just right. 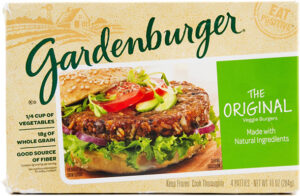 The “original” veggie burger to hit the market back in the day.

I fixed burgers with all the trimmings, my home-made coleslaw and dressing, and red-skin potato salad with homemade dressing. Baked beans with onions and brown sugar, of course, was also on the menu, as were roasted vegetables. It was to be a feast! The centerpiece of the meal, naturally, were the burgers. No run-of-the-mill beef for him, though. I decided to prepare my best, yummiest, homemade plant-based burger. Only the best for my father-in-law.

Of course, he did not know the burgers were homemade “veggie burgers” until the third or fourth bite when all of it just fell apart and dribbled down his shirt.

He politely asked, “What am I eating?”

He looked at me with a smirk, and asked again, “What is this stuff?”

This time I replied, “Cultivated meat.” (Whatever that means.)

By now he was aggravated and asked, “Is this real meat or not?”

He politely finished his burger and said it wasn’t too bad . . .  “as long as it could be drowned in ketchup, mustard, and relish!”

Well, I tried. Over the years I’ve cooked countless veggie burgers. Some have looked unattractively nutritious, full of beans, seeds, and nuts. Others were mushy and not very burger-esque. As a rule, my veggie burgers leave much to be desired, especially for real-meat eaters like my father-in-law.

A whole new batch of non-meat meats are now all the rage. Fake meat is becoming mainstream. It’s a multi-billion-dollar industry invading our kitchens, drive-throughs, and restaurants. These new meatless products are thought of as wholesome and vegan. They are marketed as nearly indistinguishable from real meat and fall into two categories: cell-based protein and plant-based protein. 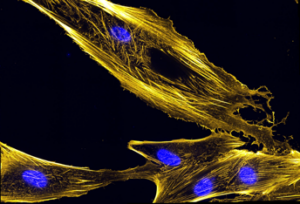 Myoblasts (in yellow) — are a precursor to muscle cells. Nuclei in blue.

In cell-based protein, an animal starter cell, usually a muscle cell, is extracted and grown in a lab culture. (Yes, you really can do this.) In the six weeks it takes to grow a chicken for slaughter, the cell culture-based process produces the same amount of meat-like protein, minus the bones, feathers, etc. These protein-cultured “meats” have many names like slaughter-free meat, in-vitro meat, vat-grown meat, lab-grown meat, cell-based meat, clean meat, cultivated meat, and synthetic meat.

The world’s first lab-grown burger was cooked and eaten in August 2013 at a news conference in London. Scientists at the Netherlands’ Maastricht University had taken about 20,000 thin strands of starter-muscle tissue from a cow and grew them (in the lab) into strips of muscle. They combined those strips with other substances to form what looks like a real-meat burger.

Have you tried any of these news meatless meats? Tell us what you think about them in the comments section below. Will you continue to eat them?
Some companies developing lab-grown meat:

The initial stage of growing cultured meat is to collect cells that have a rapid cell-reproduction rate. Such starter cells include embryonic stem cells, adult stem cells, myosatellite cells, or myoblasts – embryonic progenitor cells that differentiate and give rise to muscle cells (see image.) Myoblasts proliferate at an acceptable rate and sufficiently differentiate from other cell types. The starter myoblast is then treated by applying nutrients and appropriate chemicals to promote rapid tissue growth.

Theoretically, once this process starts, one could continue growing meat cells indefinitely. It has been claimed that in just two months, cultured meat production could deliver up to 50,000 tons of meat from 10 pork starter-muscle cells. Growers need chemicals to preserve and protect the growing cells from bacteria, yeast, and other fungi.

Large-scale production of cultured meat may or may not require artificial growth hormones. At the present time, engineered meat is not commercially available, but it’s coming. 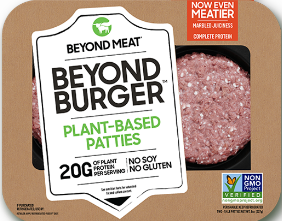 Beyond Meat makes a product that claims it’s “now even meatier.”

For plant-based protein products, protein extracts and isolates from a plant are combined with other “stuff” to make the non-meat protein as “meaty” as possible.

Currently, the two top contenders in the plant-based meatless meat market are Beyond Meat, which markets the Beyond Burger (featured in Carl’s Jr., Subway, and now McDonald’s), Beyond Beef (plant-based ground) and Beyond Sausage; and Impossible Foods, which markets the Impossible Burger sold in grocery stores and also at Burger King, Red Robin, White Castle, Umami Burgers, A&W, and Qdoba.

Battle of the burgers

The top five Impossible Burger’s ingredients include water, soy protein concentrate, coconut oil, sunflower oil, and natural flavors. But the secret sauce that makes the Impossible Burger taste so much like real burger meat is heme, found in nodules attached to roots of nitrogen-fixing plants, in this case, soy. This heme is similar to myoglobin and hemoglobin, which makes human blood red. The plant-based heme, called leghemoglobin, inserts into genetically engineered yeast. When the yeast goes through fermentation it stimulates production of more heme. 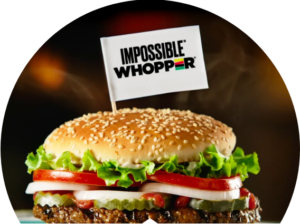 Overall, the Impossible Burger is kosher and halal-certified, but not organic. A 4 oz. patty packs 240 calories, 370mg of sodium, 19g of protein, zero cholesterol, 14g of fat (including 8g of saturated fat), and 370mg of added salt – 16 percent of the daily recommended amount. Also, the Impossible Burger contains less than 1g of added sugar and 3g of fiber per serving, largely in the form of methylcellulose, a plant-based bulk-forming binder. 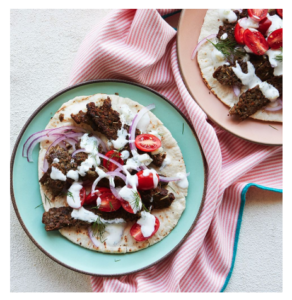 Impossible’s website showcases recipes that go “beyond” burgers, including the Impossible Gyro. 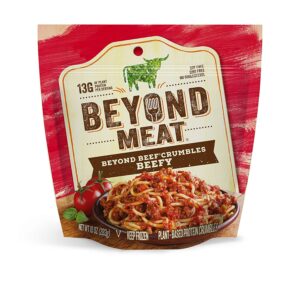 Beyond Meat makes “beefy” Beyond Beef Crumbles for your convenience. 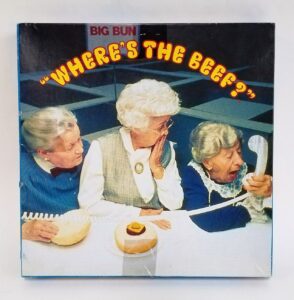 This was one of Wendy’s most-memorable ad campaigns.

Plant-based meat sounds nutritious. Individually, the ingredients pose no harm. But we should not assume plant-based meat is harmless before we have results of more extensive and long-term research. I am most interested to see how different ingredients in combination interact with and affect the gut microbe (see my Health Yourself column “Gut Check”). I also would like to see more research on health issues associated with genetically modified foods (see my Health Yourself column “Do we really need or want genetically modified foods?”). 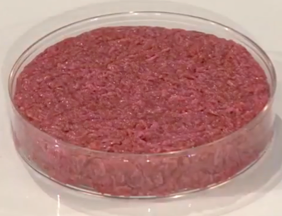 Beyond Meats’ first lab-cultured hamburger, ready to be fried on Aug. 5, 2013.

Artificial meat producers want to redefine “meat” as nothing more than a proprietary mix of chemicals – proteins (amino acids), flavors, and colorings – creating replicas of animal meat by way of creative molecular bioengineering. Indeed, these companies have succeeded in reproducing a meat-like burger that’s not real meat. But while they’ve skillfully replicated the taste, sight, and even smell of real meat, there’s still something different.

Real animal meat is more than just chemistry. Like all real food, it’s the totality of the whole food that’s important, not any single ingredient. As we’ve seen with other real whole foods, altering its composition by isolating, reducing, or adding ingredients fundamentally changes how that food behaves and contributes to the human body and overall health.