How does long-distance running affect you?

The Myth of Pheidippides

The original marathon race, created in 1896, paid tribute to the legendary run completed by Greek messenger Pheidippides in 490 BC. 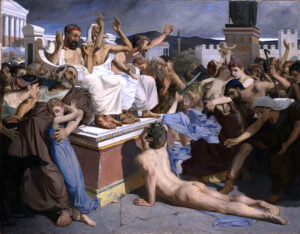 Pheidippides gives word of the Greek victory over Persia at the Battle of Marathon to the people of Athens. Painting by Luc-Olivier Merson, 1869. (Wikipedia)

That’s when, according to legend, Pheidippides (530-490 BC) ran 26 miles from Marathon to Athens to deliver news of a military victory against the Persians in the Battle of Marathon. But that’s not the whole story.

Upon learning the Persians had landed on Greek soil, the Athenians sent Pheidippides to Sparta to seek aid. In a remarkable athletic feat, Pheidippides covered the 140 miles from Athens to Sparta in two days, fighting through rough terrain and mountain passes. The Spartans said it was against their custom to go to war during the second new moon of the year and told Pheidippides Athens would have to wait six more days. After a night’s rest, the ever-faithful running messenger logged another 140 miles back to Athens to deliver the sobering news.

Upon arrival, he learned the Greek commanders were entrenched at Marathon, about 26 miles outside Athens. So he ran on to Marathon.

When the Greeks surprisingly triumphed in the final battle of Marathon, Pheidippides ran back to Athens with the news. He burst into a council meeting, yelled “Nenikikamen!” (“Victory is ours!”) and, so the story goes, dropped dead.

In just five days, Pheidippides had run an aggregate 332 miles — without shoes.

The Spartathlon
Since 1983, an annual footrace from Athens to Sparta, known as the Spartathlon, traces Pheidippides’ grueling one-way run across 140 miles of rugged Greek countryside. There’s even a movie about the event.

As organizers planned the 1896 Greek Olympics, the first modern Games, they decided to celebrate Pheidippides’ run with a long-distance race from Marathon to Athens. And so the contemporary marathon was born. The Greek runner Spyridon Louis won the race, collecting Greece’s only gold medal of those games. The first marathon was 39.9 kilometers (24.8 miles). The distance was changed to 42.195 kilometers (26.2 miles) at the 1908 London Olympics. The change was based not on the distance from Marathon to Athens, but rather the distance from Windsor Castle to London’s Olympic Stadium.

In normal times, the U.S. hosts about 570 scheduled marathon races annually, with 0.5 percent of the country’s adult population participating. The New York Marathon counted 53,627 finishers in November 2019. It remains to be seen what happens in 2020 in light of the coronavirus’ devastating impact on the people of NYC.

The 1968 publication of Aerobics by the military surgeon and preventive medicine specialist Kenneth Cooper brought the term aerobics into the public consciousness. The word began appearing in subsequent books and scientific articles, sparking a global fascination with long-distance running. Through the years, researchers, experts, athletes, and others have raised questions about the potential negative health effects of competitive (and recreational) long-distance running on the human body.

In 2018, about 7 million people participated in long-distance running events, according to runrepeat.com
Knowledge about any detrimental effects of long-distance training is paramount, particularly for those who already favor long-distance exercise. Before initiating a vigorous endurance program, it’s a good idea to see a physician and undergo a complete medical check-up. This is important, no matter your age. Your doctor should include an exercise stress test (generally on a treadmill) to ensure you have no cardiovascular issues. Getting medical clearance is particularly important for current or former smokers, people who are overweight or obese, people whose family includes a history of heart disease, or people who have an underlying condition, such as asthma or diabetes. 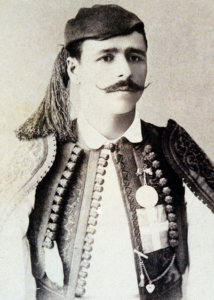 Spyridon Louis, winner of the first marathon in 1896. (Wikipedia)

Another potential concern has been footstrike hemolytic anemia, caused by red blood cell destruction from increased lower extremity impact. However, this effect is variable and inconsistent.

Immune System
The molecular and cellular immunological effects of vigorous exercise have been well-reviewed. The risk of upper respiratory infections (URIs) appears to be the only clinically important effect.

Are you a long-distance runner? Share your experience in the comments section below.
Musculoskeletal
The perceived forceful impact of running has led to speculation concerning its relation to osteoarthritis (OA). Investigations within the last 10 years offer mixed results. A prospective cohort study with more than 74,000 runners compared with more than 14,000 walkers found that running decreased the risk of OA and hip replacements over 7.1 years. Similarly, another large systematic review and meta-analysis also did not find an association between running and OA or hip replacement. A few isolated studies have reported a weak association between long-term running and OA in the hips and knees. There is some evidence that older individuals with OA probably should engage in low-intensity, low-impact endurance exercise. Walking is preferred.

Gastrointestinal
Gastrointestinal symptoms, including reflux, nausea, vomiting, and diarrhea, are common complaints among endurance athletes. They are largely transient, with no identifiable long-term consequences.

Dermatology
Although outdoor exercise increases athletes’ exposure to ultraviolet (UV) light, endurance athletes do not have an increased skin cancer risk beyond that associated with increased UV exposure. Applying sunscreen is an effective way to curb UV exposure. 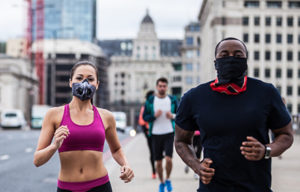 Air pollution
A report of a large prospective cohort study of more than 50,000 Danes (observed for up to 20 years) did not find that air pollution risks outweighed the physical activity benefits on multiple morbidity and mortality measures. Two other population-level analyses found increased physical activity associated with lower mortality rates, despite increased exposure to air pollution. Thus, the beneficial effects of exercise seem to outweigh any potential negative consequences of air pollution.

Research on cardiovascular complications from strenuous endurance exercise indicates no long-term adverse effects. Risk from cardiac arrest is small during long-distance running: 0.9/100,000 males running a full or half-marathon and 0.16/100,000 for females. Approximately three-fourths of the cardiovascular events resulted from hypertrophic cardiomyopathy or myocardial ischemia, already thought to be present in the runners. All runners with myocardial ischemia were successfully resuscitated.

Acute decreases in right and left ventricular function have been observed in long-distance runners, but no evidence was found that these structural changes led to detrimental clinical events. Studies over a 25-year period demonstrate a positive, sustained increase in left ventricular compliance with exercise. In one meta-analysis, the risk of atrial fibrillation (AF) was higher in athletes compared to controls, while in another study, physical activity was protective for AF development compared with sedentary individuals. Overall, the data seem to suggest that endurance exercise associates with a small AF risk.

The most clinically relevant effects from vigorous endurance exercise include increased iron-deficiency anemia in women and a minor increase for atrial fibrillation. Outdoor endurance exercise may increase predisposing risk factors for dermatological malignancy beyond UV light exposure, but the extent of risk remains unknown.

It should be noted that most studies were conducted in runners as opposed to cyclists, skiers, rowers, and other endurance athletes. These activities associate with substantial levels of aerobic exercise, yet one activity mode may not be generalizable to all types of endurance activities.

Overall, it appears endurance exercise remains safe for almost all persons in the population, and may even increase longevity for apparently healthy individuals.