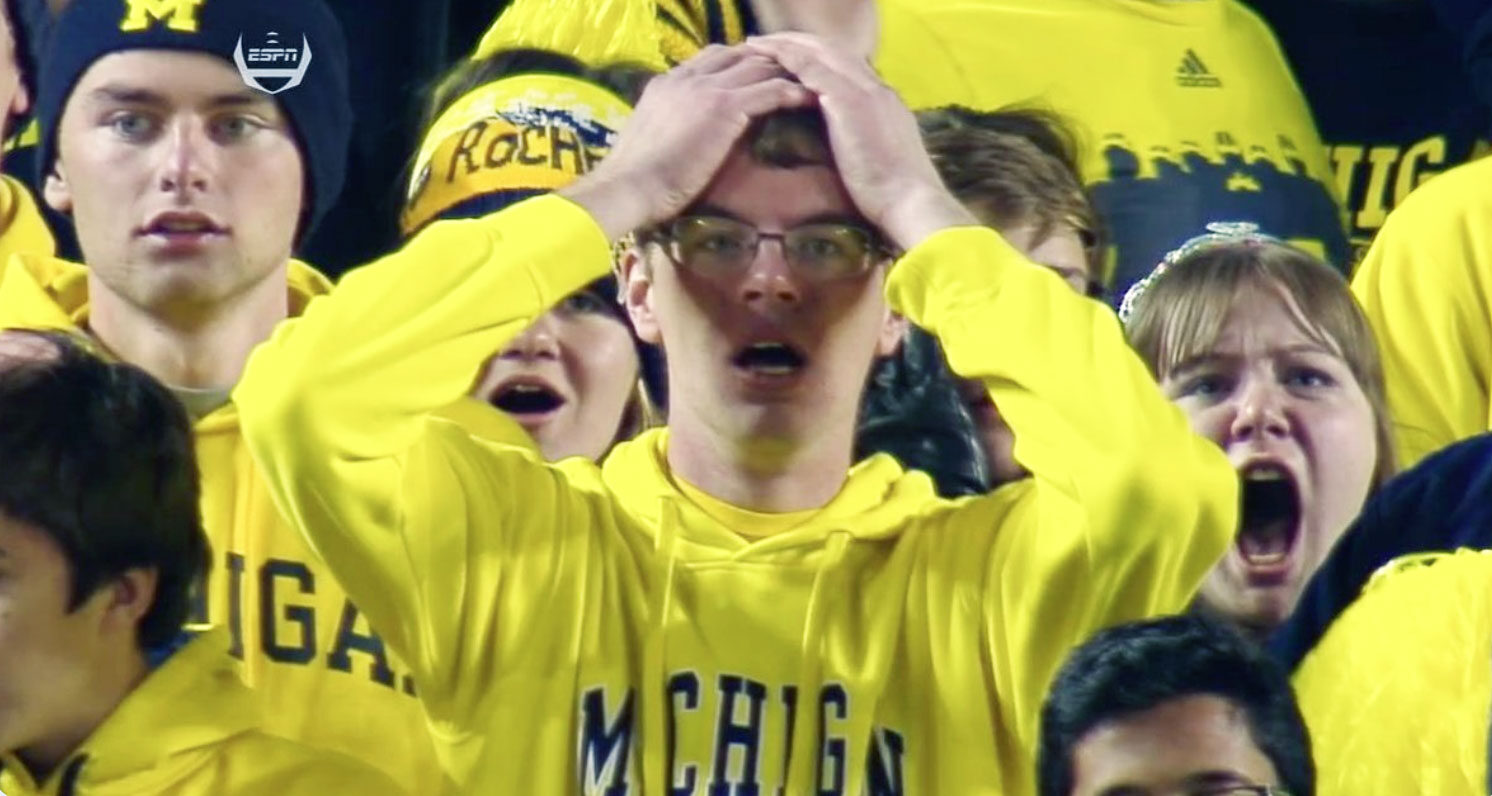 It happened during the 1993 NCAA men’s basketball championship game between the University of Michigan and the University of North Carolina. Although that was 27 years ago, the shock waves still reverberate around some alumni circles, even today. 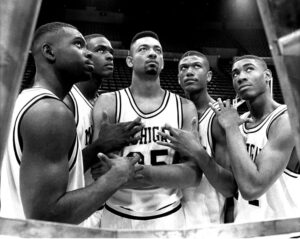 Earlier in the 1992-93 season, U-M’s Fab Five had romped over the North Carolina Tar Heels and were favored to win the national championship when the two teams squared off in the finals. With 11 seconds left in the game, Chris Webber found himself backed into a corner and called a timeout. The problem: Michigan didn’t have any timeouts remaining. Officials ruled it a technical foul, and the Tar Heels went on to clinch the game, 77 to 71.

Michigan gridiron fans also have witnessed their share of clangers on the football field. One of the most memorable occurred during the heated Michigan vs. Michigan State game in 2015.

The Wolverines were ahead 23 to 21 in the fourth quarter and had possession of the ball. The team needed a successful punt to flip the field. With the clock ticking down, Wolverines punter Blake O’Neill lifted his eyes too soon and fumbled the snap. His flub allowed the Spartans’ Jalen Watts-Jackson to snag the ball and score a touchdown in the final 10 seconds, giving Michigan State a 27 to 23 victory.

Tug-of-war inside the brain

Psychologists have a name for this lapse in performance when the stakes are high. They call it choking under pressure. 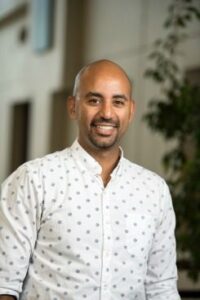 “I think choking under pressure is something we all can relate to at some point in our lives — whether it’s playing sports, taking final exams, making public speeches, or meeting someone for the first time,” says Taraz Lee, assistant professor of psychology. “These are situations where we have practiced hard and want to do our best, but we fall short of the mark because we are stressed out or feel intense pressure to perform well.”

Choking under pressure is not just a quirk of human nature, however.

Over the past five years, Lee has studied how this tug-of-war inside the brain can drastically diminish people’s performance under pressure-cooker conditions, and what they can do to avoid these disappointing, and often embarrassing, meltdowns.

The consequences of choking under pressure can be game-changers, according to Lee.

“Many employers and schools are now using standardized tests and grades to give people opportunities for jobs and education,” he says. “If people are unable to do their best in those high-pressure test situations, it could have lasting impacts on their lives.” 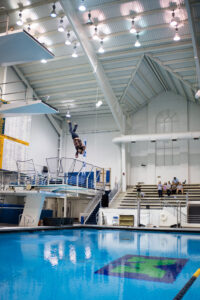 This scene from a film shot at Canham Natatorium captures the nightmare of a stressed college diver, competing while fully clothed. (Image: Michigan Photography.)

So, exactly how does your brain work, and what can go haywire when the pressure is on?

“It takes a long time for your brain to learn movement skills, so initially you have to exert a great deal of conscious control over your attention and actions,” Lee says. “After a while, these skills become automatic and are offloaded to a different brain system. You no longer have to use that conscious control and can focus your attention on other tasks.”

Lee suggests thinking about the first time you learned to drive a car, play a musical instrument, or pick up a new sport. In the beginning, you were a novice, so you had to concentrate hard on learning each step of the process. This conscious control relies on the prefrontal cortex, an area of the brain just behind your forehead.

During drivers’ education, for example, you were taught to check that the car was in park, then turn the engine on, put your foot on the brake, shift into drive or reverse, look for oncoming cars or pedestrians and, finally, move your foot to the gas pedal to accelerate.

Once you finished your drivers’ ed coursework and completed months of student-driver practice, the driving process became almost automatic. These movement skills have shifted to muscle memory. This “movement automaticity” relies on an entirely different brain area called the basal ganglia.

The same thing probably happened when you began to play the piano, swing a golf club, or shoot a basketball. It took months of lessons, coaching, and practice to nail down your skills and techniques. But after you gained expertise, you didn’t think twice about performing a concerto, sinking a putt, or making a three-pointer.

According to Lee, the rub comes when people who are experts in their field, virtuosos on their instrument, or top athletes in their sport suddenly find themselves under intense pressure to perform at their very best. That’s the moment when many high performers choke under pressure.

To examine this phenomenon, Lee conducted a 2015 study with 20 undergraduate college students who learned a videogame and competed for cash rewards.

Lee suggests these tips to avoid choking under pressure.

“I find it hard to follow these tips myself,” Lee concedes. “Like everything else, practicing under pressure can help, but there are no guarantees.”

He observed the students improved their gaming skills steadily as long as the rewards were small. However, when the cash jackpots got really big and the stakes were high, their performance took a nosedive. Notably, brain imaging revealed that the prefrontal cortex of the students’ brains showed overactivity when choking under pressure occurred.

Lee says psychologists have two theories about why this happens to people.

The first explanation has to do with distraction.

“Your prefrontal cortex helps you consciously control your behavior and is very susceptible to distraction and stress,” Lee explains. “Under pressure, that brain area doesn’t work very well, so you become easily distracted and can’t focus on what you’re supposed to be doing.”

The second explanation, known as explicit monitoring, is somewhat different. In this case, extreme pressure or high stress compels top performers to try to retake conscious control over well-learned skills that have become automatic.

“In moments when you want to do your best, you may focus too much on the step-by-step details of the action you are performing, and this disrupts the muscle memory you have built up,” Lee says. “Essentially, you are switching back to using conscious control, which doesn’t have that muscle memory and, additionally, does poorly under stress.”

He calls this the “double whammy of overthinking and distraction.”

Case in point. Look what happened to pro golfer Jean Van de Velde, who had a shot in 1999 at becoming the first Frenchman to win the British Open since Arnaud Massy in 1907.

During the 1999 tournament at the Carnoustie Golf Links in Scotland, Van de Velde had played flawlessly and had a three-stroke lead going into the 18th hole. That’s when he choked up. Onlookers and sports reporters stood aghast as they watched Van de Velde shank his drive off the 18th tee and then hit successive balls into the grandstand railing, a water hazard, and a sand bunker. He ended up losing the tournament to Scottish golfer Paul Lawrie.

Choking under pressure is not inevitable, Lee says. Strategies and techniques can help you keep cool when you’re hard-pressed to perform.

Have you (or a friend…) ever “choked under pressure?” Share your experience in the comments section below.
In a 2019 study, Lee trained 64 undergraduate college students to take a sequence-learning test that involved pressing buttons that corresponded to lighted boxes on a screen.

When the students competed for high cash rewards, the group that trained with conscious knowledge of the skill showed the choking effect while the group that acquired the skill through unconscious learning demonstrated stable performance with no fall-off.

“This is evidence that if you can mask conscious awareness of the skill, you can protect against choking under pressure,” Lee says.

Some coaches are incorporating this idea by training athletes through analogy. For example, a golf coach may direct a student to keep his arm “as stiff as a board” or to swing her club “as smooth as water.”

“When you train in this way, you don’t know what your body is doing,” Lee says, “so you rely on muscle memory and likely don’t even know how to take conscious control of automatic actions under pressure.”

(Top image: One of the most memorable clangers on the football field occurred during the heated Michigan vs. Michigan State game in 2015. The Wolverines were ahead 23 to 21 in the fourth quarter and had possession of the ball. The team needed a successful punt to flip the field. With the clock ticking down, Wolverines punter Blake O’Neill lifted his eyes too soon and fumbled the snap. His flub allowed the Spartans’ Jalen Watts-Jackson to snag the ball and score a touchdown in the final 10 seconds, giving Michigan State a 27 to 23 victory. Fans were stunned, as this famous image, broadcast on TV during the game, shows.)