Anticipation, reaction, or something in between? 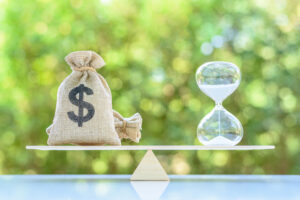 It’s a delicate balance between reacting to a current crisis and planning for future unknowns. (Image: iStock.)

At U-M, we have made it through a semester dominated by the disruptions of the COVID-19 pandemic. From a planning perspective, there are many similarities between COVID-19 and climate change.

One, there is the central role of models that guide us toward understanding a future much different from the past. That model-based future is full of threats of disruption and, likely, catastrophe. And two, striking the appropriate balance between reaction and anticipation confounds people in both arenas.

By reaction, I mean waiting for something to happen and then responding to it. By anticipation, I mean knowing something might happen and preparing for it in case it does. At first blush, adapting to climate change is reacting to events as they unfold. Mitigation of climate change by reducing carbon dioxide emissions is anticipating the threats and reducing the risks of those future threats. This is the difference between spending money to fix a problem when it happens versus spending money on a problem that may or may not occur.

Do we spend now or save our money for later? Do we have the ability to save and, consequently, give up something now?

The human relationships with climate and pathogens exist in a tenuous balance. In these balances, we have learned how to live well enough that we can aspire to thrive. Climate change and a novel, lethal virus challenge these balances.
Do we close down the economy in anticipation to stem the loss of life in a pandemic, or do we let the pandemic take its course?

In virtually all cases, the optimal (perhaps correct) answer lies in between.

The human relationships with climate and pathogens exist in a tenuous balance. In these balances, we have learned how to live well enough that we can aspire to thrive. Climate change and a novel, lethal virus challenge these balances.

We must move from our present balance to a new one, and we need to thrive as we do so. Many paths traverse that treacherous transition. Successful paths are not characterized by the extreme philosophy of focusing strictly on an open economy versus social distancing, mitigation versus adaptation, or reaction versus anticipation. Success is characterized by maintaining some level of balance, with our decisions informed along those paths, as evidence emerges and uncertainty is better described.

Well, what do you think? Tell us in the comments section below.

In my previous column, I wrote about the intrinsic challenges of using science-based models and model-based reasoning. These challenges are both individual and collective. Imagine planning an outdoor wedding and, two days in advance, the National Weather Service projects a high tornado risk in the exact two-hours that include the ceremony. This personal decision is full of emotion, cost, ambiguous risk, and uncertainty.

Plus, we know that at a philosophical level all of the models are “wrong.” Still, their guidance can be established as credible and shown to have been useable.

Using models to communicate scientific issues is essential to strike this balance. This becomes confusing when the explicit purpose of our proposed interventions is to alter the models — to perhaps, prove the models wrong. Though, we do not, in fact, want to prove the models wrong as much as we want to alter the data being used to define and bound the models. In this way, we shift the model to a different projection of future outcomes. We want that projection to be less treacherous. We want those changing projections to be informing our paths as we move from our historic balance to our future balance.

COVID-19 will influence our response to climate change 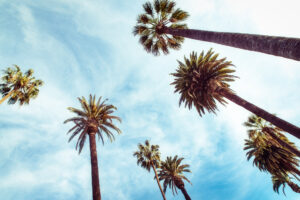 I want to return to reaction and anticipation. There have been many studies and plans made in anticipation of a pandemic. These exist in government, academia, and business. As my students research how cities and states respond to weather and climate disasters, they frequently find unfunded, unimplemented plans that anticipated these disasters. Those plans, if implemented, would have reduced the damage and cost of the disaster. The cost of the implementation would have been less than the crisis, and there would have been other benefits as well.

It is evident that, as a collective, we have aversions to paying now to reduce the costs and damage of future, always-uncertain risks. I do not feel that a societal-scale response to climate change through behavior-changing policy is feasible. There always will be a push and pull between reacting and anticipating, adaptation and mitigation, and short-term and long-term. The successful paths will have ever-present push and pull.

In my class, we talk about the characteristic amounts of time to address climate change. We have years to a small number of decades to limit the planet’s warming so that we can intelligently invest — now — in anticipation of managing the costs of adaptation. 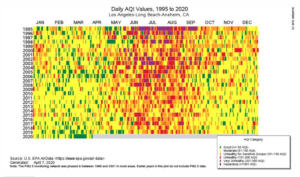 According to CNN, EPA data shows that in March 2020, the Los Angeles area experienced the longest stretch of “good” air quality since at least 1995. (Source: CNN.)

We also stipulate that economic, energy, health, and national security emergencies always will take priority over any response to climate change. One consequence of that reasoning is that climate change has to be internal to, part of, all of those issues; that is, not treated as an outside and independent issue. Such internalization is a monumental task.

Many have talked about how the COVID-19 shutdown has made clear the environmental damage caused by human activities. There will be a historic drop in carbon dioxide emissions, affirming, once again, that our proved strategy of emissions reduction is recession. Few accept recession and depression as the way to solve the climate problem.

Politics will go on. Those inclined to do so will point to emissions reduction as the ability of the U.S. to exceed the goals of the Paris Agreement without having to be part of the Paris Agreement. They will show the evidence of cleaner air even as environmental regulations were removed. They will, convincingly, point to the cheapness of fossil fuels as fundamental to fast economic recovery. Our response to climate change is more likely to be slowed than advanced.

COVID-19 does not provide us with a model of behavior to follow. It provides greater challenges, and likely opportunities, of how to follow an evidence-based path as we leave the climate of our past.