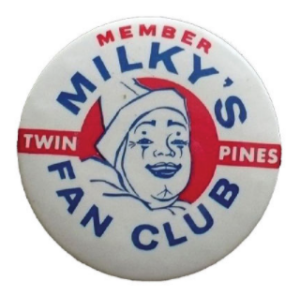 Who remembers Milky the Clown, mascot for the Detroit-based Twin Pines Dairy?

In the U.S., health experts recommend adults and children 9 years of age or older consume an average of three 8 oz. servings (237 mL) of milk daily (or equivalent cheese, yogurt, or other dairy product). This amount is substantially higher than the current average adult intake of only 1.6 calcium servings daily.

Scientists supposedly have justified this relatively high recommendation to meet to reduce bone fractures and all-cause mortality risk. But recently scientists have challenged this assertion about milk’s health benefits and warned about possible adverse health outcomes.

The table below presents the nutrient composition of human milk, cow’s milk, and cheese. To increase milk production, cows have been bred to produce higher insulin-like growth factor I (IGF-I) levels. This increases the level of progestins and estrogens in their milk.

Milk processing has many potential positive and negative health implications. For example, pasteurization reduces brucellosis, an infectious disease characterized by high- and low-fever swings, the sweats, muscle and joint pains, weakness, tuberculosis, and other pathogen transmissions. In contrast, fermentation, used to produce aged cheese, yogurt, kefir, and other products, denatures important peptide-hormones. The process alters protein antigens (a toxin or other foreign substance which induces an immune response in the body, especially the production of antibodies), reduces lactose content, and affects bacterial composition. 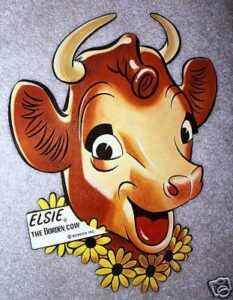 Elsie the Cow first appeared in 1936 as a mascot for the Borden Dairy Company to symbolize the “perfect dairy product.”

Experts often cite calcium’s supposed bone-health benefits as a way to rationalize this recommended high level of lifelong milk consumption. Such an assumption derives from early studies assessing calcium balance in just 155 adults in whom the estimated daily calcium intake necessary to maintain calcium balance averaged only 741 mg. These small studies had other serious limitations, including short duration (2-3 weeks) and varying habitual calcium intakes. In other studies, the threshold for estimated calcium balance occurred at approximately 200 mg per day among males who had low habitual calcium intakes.

In randomized trials that used bone mineral density as a fracture risk indicator, daily calcium supplements of 1,000-2,000 mg produced a 1-3-percent  greater bone mineral density (BMD) than a placebo. If sustained, this small divergence would be important. However, after one year, the rate of BMD change among late perimenopausal and postmenopausal women equaled the placebo value, and upon discontinuing the supplementation, the small difference in BMD disappeared. Because of this transient “beneficial effect” of calcium supplementation, trials lasting one year or less can be misleading, and the 2-3-week balance studies to establish calcium requirements have limited relevance to fracture risk. In fact, higher calcium intakes may relate to higher hip fracture rates.

The figure below shows milk consumption as a proportion of total energy intake versus age-standardized hip fracture rates annually per 100,000 persons. As can be observed, countries with the highest milk and calcium intakes tend to have the highest hip fracture rates. This positive association may not be causal, however, because confounding factors like vitamin D status and ethnicity could have impacted the findings. 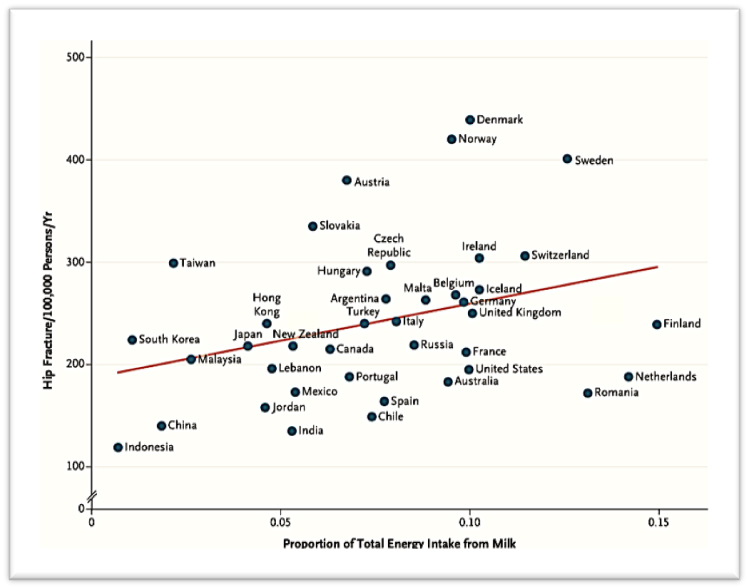 Data on national milk intake (including all forms of milk, cheese, and other derived products) come from the United Nations Food and Agriculture Organization report on Milk and Dairy Products in Human Nutrition, and nationally representative hip fracture rates combining males and females standardized to the 2010 world population. 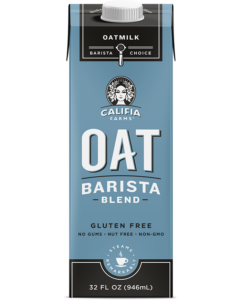 Specialty products, like the dairy alternative oat “milk,” retail for a higher price than cow’s milk.

Comparisons reflect 3 percent of protein-energy from each source, with milk corresponding to about 500 g (two 8-oz. glasses). Data were recalculated with dairy foods as the comparison based on a 32-year follow-up in 131,342 males and females. 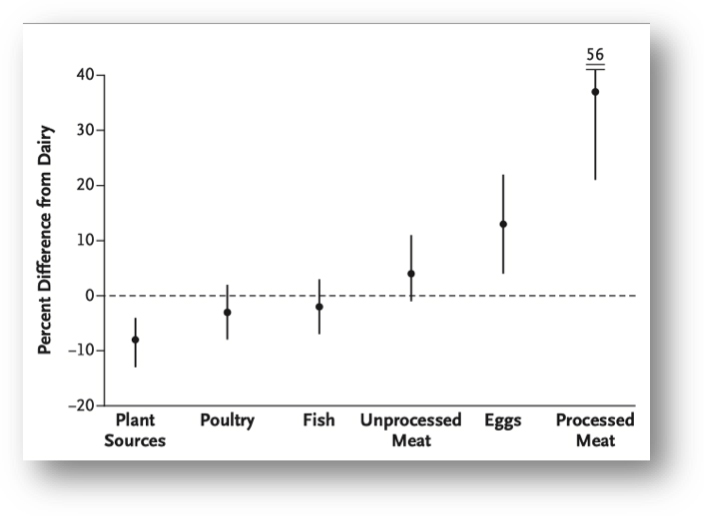 The overall evidence for adults does not support high dairy consumption to reduce fractures. Current recommendations to increase dairy food consumption to three or more milk servings per day appears unjustified. Optimal intake of milk for any individual, of course, depends on overall diet quality. If diet quality is low, especially for children in low-income environments, dairy foods can improve nutrition. In contrast, where diet quality is high, as often observed in the U.S., increased dairy intake is unlikely to provide substantial benefits. Harm is actually possible.

When consumption of milk is low, the two nutrients of primary concern, calcium and vitamin D, can be obtained from other foods (or supplements) without the potential negative consequences of excessive dairy intake. Rich sources of calcium include kale, broccoli, tofu, nuts, beans, and fortified orange juice; for vitamin D, supplements can provide adequate intake at a far lower cost than fortified milk.