‘I feel so safe underwater’ 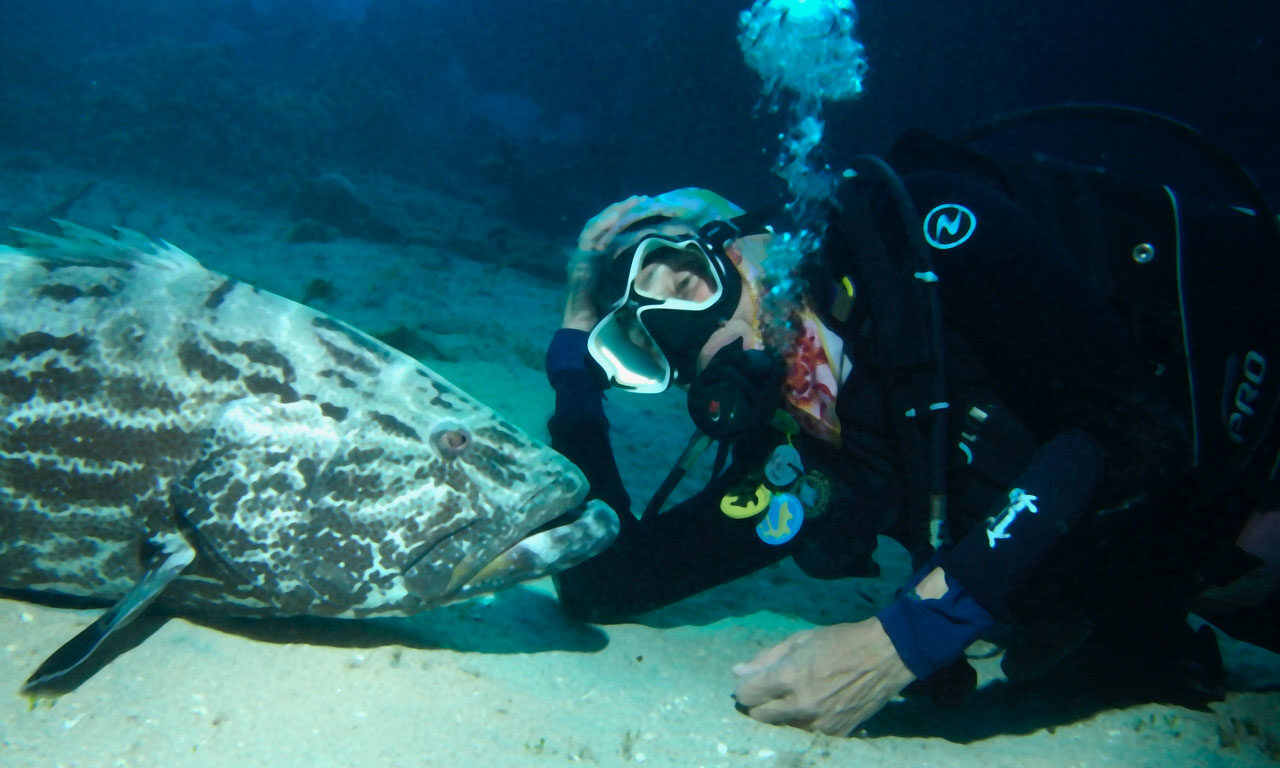 It’s a long way from the University of Michigan’s Biological Station on Douglas Lake to the necklace of coral reefs surrounding Grand Cayman Island. But that’s where you’ll find marine biologist Cathy Church, BS ’67,  one of the world’s most celebrated underwater photographers.

“My father thought it was impractical for me to enter a field dominated by men, especially when he knew I was just going to waste my Michigan degree and wind up being a housewife,” says Church as the tradewinds cool her lovely Cayman diving base just south of George Town.

It was her mentor at the Biological Station, legendary ornithologist Olin Pettingill Jr., who inspired Church to pursue a career in science. And though she wasn’t certified to take out diving gear that summer in Pellston, Mich., she would later meet Lee Somers, a U-M doctoral student/diving instructor, who waived fees on lessons and SCUBA equipment at Ann Arbor’s YMCA. Somers would go on to be a Michigan Sea Grant specialist in diver education and aquatic accident management. 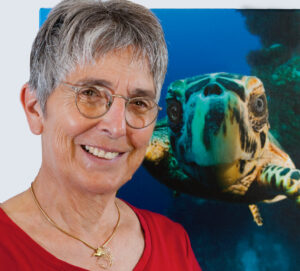 Church in front of her most popular photo ever. “We call it Nosy turtle,” she says. “He was actually holding onto my knees as he pushed his beak against the dome port of my big camera.” (Image courtesy of Cathy Church.)

Determined to prove her father wrong, Church headed west after graduation to the University of Hawaii. She was working toward a master’s degree in marine biology when she hit an immovable roadblock. Turned out women were not allowed to travel overnight on the school’s research vessel. Unable to explore the Pacific Ocean from a ship, she was forced to shore dive off Hanauma Bay to complete research for her master’s thesis on the feeding habits of sea urchins.

“Unlike Michigan or Woods Hole, women couldn’t move up in marine biology on the West Coast or Hawaii,” she says.

Ultimately, Church quit her scientific pursuits to focus on underwater photography and teaching.

“The ocean teaches you something new every day,” she says.

And it’s always peaceful below the surface, a rare commodity in today’s chaotic world.

“I’d sleep down there if I could,” Church says. I feel so safe underwater.” 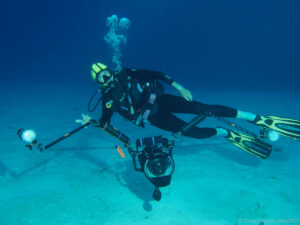 Church is supporting her large camera easily with one finger for a lesson on how to make one’s huge, heavy camera neutral in the water. (Image courtesy of Cathy Church.)

After finishing her master’s degree, she returned to the mainland with her first husband, Jim Church, a California teacher and underwater photographer. Because the door was closed to women divers at places like the California Department of Fish and Game, Church taught science to junior high students. During summers, the couple began teaching photography along the Grand Cayman reefs and gained acclaim writing and shooting for publications such as Skin Diver magazine.

“I wasn’t interested in catching fish with seine nets,” Church says from the Sunset House Hotel where she runs Cathy Church’s Photo Centre and Gallery with her second husband, Herb Rafael. “I wanted to dive down, swim with the aquatic life, and discover what is going on in their environment.”

She ultimately moved to Grand Cayman where she built her flourishing dive business, while writing, editing, and publishing books and magazine articles. The center offers diving and underwater travel options, photography lessons, workshops, and other services. Church’s far-flung trips (pre-COVID) took divers to such exotic locations such as Indonesia, the Solomon Islands, and the Maldives where they learned the best techniques to photograph turtles, rays, angelfish, and other marine life. 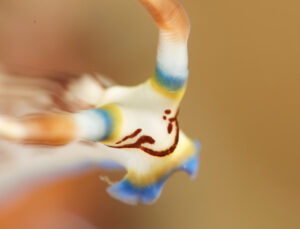 When she’s not diving and photographing somewhere in the world, Church is advocating for environmental conservation and protection of her beloved coral reef. Her current adversary is the cruise ship industry and its plans for George Town. Grand Cayman’s reefs and their dependent species serve as a magnet to the more than 1.8 million passengers who travel to the island each year. An industry consortium is seeking to build a berthing and cargo port in George Town, in part to improve the tourist experience. Church argues the port could decimate some of the island’s most popular coral reefs. And to her, the whole plan feels like plunking down a truckstop in front of the Taj Mahal.

Ironically, COVID-19 has proved an unlikely ally in her battle. The pandemic shut down Grand Cayman to tourism, air, and cruise ships in March. The reduced cruise traffic has resulted in a more robust fish population, Church says.

“When you go into ‘Sting Ray City’ now you see sharks,” she says. “Without all the people there it’s becoming a more natural environment.”

Fully reopening the island to tourism appears to be dependent on controlling the pandemic internationally to make sure passengers arriving from other countries are free of coronavirus. At the moment, no commercial flights will be allowed into Cayman until at least Oct. 1. As of publication, Grand Cayman has had 205 Covid-19 cases and one death.

Church and fellow activists are working to persuade the government to hold a national election that would allow the public to vote on the proposed George Town port expansion. On this British-ruled island, 56.6 percent of the permanent population would be eligible to vote. The cruise lines are fronting the construction cost, estimated at about $250 million. The Cayman government will pay them back via port and landing fees collected over the next 25 years. With interest, the tab could balloon to over $400 million.

Once upon a time 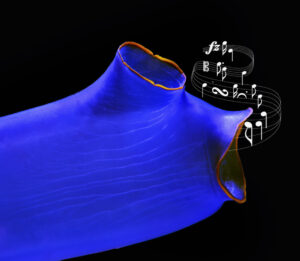 “When I saw this tunicate from the side,” Church says, “It just demanded to have some sound coming out of his mouth.” (Image courtesy of Cathy Church.)

Part of the cruise industry’s goal is to eliminate the 15-minute tender ride, which now ferries the passengers from ship to shore. Church argues the ambitious construction project would eliminate good jobs for the Caymanian tender workers while possibly destroying some of the island’s most prized reefs. She is a prominent figure at seaside rallies with a coalition of local business owners and environmentalists (as well as a costumed mermaid or two). It is not lost on her that she has instructed many passengers from the same cruise lines she opposes.

“This project would effectively ruin some of the busiest reefs on the island,” she says. “Elsewhere in the Caribbean, cruise ship side-thrusters destroy visibility in the port. Once they build the new berthing facility Grand Cayman will lose its unique clear water in a region zoned as a marine park until plans for this port got started.

“It’s been a hard fight,” she continues. “But slowly the Caymanian people are finding their voice. Our unique marine environment is what has made our island world-famous. Destroying it by diverting visitor and port taxes from the entire Cayman community for this one project makes no sense.”

This current battle is all part of Church’s deep-sea odyssey punctuated with a continuing series of intriguing challenges.

Undaunted, she does not lament failing to realize her dream of becoming “a university research scientist.”

“Had it not been for the obstacles that confronted women academics in those days,” she says, “I probably never would have never discovered Grand Cayman where my students teach me something new every day.”