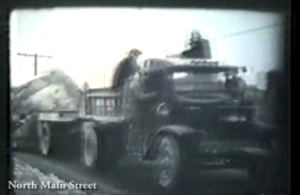 Ann Arbor History: Placing “the rock” at Washtenaw and Hill in 1932 from robstan visuals on Vimeo.

As I sit here making yet another issue of Michigan Today from my kitchen table, I ponder the immense challenges we face as the human race, not to mention as a University community.

Classes are set to begin Monday, and it’s anybody’s guess what September will bring.

I believe we all can make the impossible possible in some way or another, but COVID-19 has poked a few holes in that credo of late. The derecho in Iowa, the fire tornados in California, and the torrent of political mayhem polluting our hearts and minds per Twitter doesn’t help.

So when I discovered a thread on a neighborhood chat asking if anyone knew the history of “The Rock” at Hill and Washtenaw, I felt oddly comforted. Something solid. Immovable.

I thought I knew the story of this oft-painted boulder, but before long, I discovered I had missed perhaps the most essential element of the tale. That colorful blob of glacial sediment did not originate in that triangular traffic park. Someone placed it there.

I would like to take a moment to think about this. Ann Arbor’s superintendent of parks at the time, Eli Gallup, decided to celebrate the bicentennial of George Washington’s birth in 1932 by digging up and transporting a massive rock from one side of Ann Arbor to another. Apparently, Gallup “liked rocks” (ya think?) and placed several around town. When he set his sights on this one, he enlisted WPA workers to help him. Lots of them. 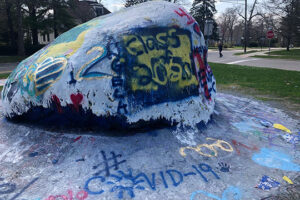 I discovered this Vimeo clip, “Ann Arbor History: Placing the Rock at Washtenaw and Hill in 1932.” Posted in 2011, and narrated by Al Gallup, it starts with men in a pit, surrounding the massive boulder, using all manner of physics, brute strength, and borrowed equipment to raise it from its resting place. I’m pretty sure a steam shovel was involved.

Watch the grainy footage as the naked Rock moves through town, right down Main Street, and lands at its designated home. Listen to the soothing voice of Al Gallup, as he narrates a storyline that begs one question over and over: “Why?”

What compelled these scrappy locals to embark on this bizarre, Herculean feat in the middle of winter? They didn’t get paid. It was icy. It required two connected trucks with chains on the wheels just to move the Rock a few short miles.

I mean, Lord, they could have just planted a damn cherry tree if it was all about Washington.

Ahhhh, but that would have been easy.

Perhaps these guys just needed to know they could make the impossible possible. And I love them for it.