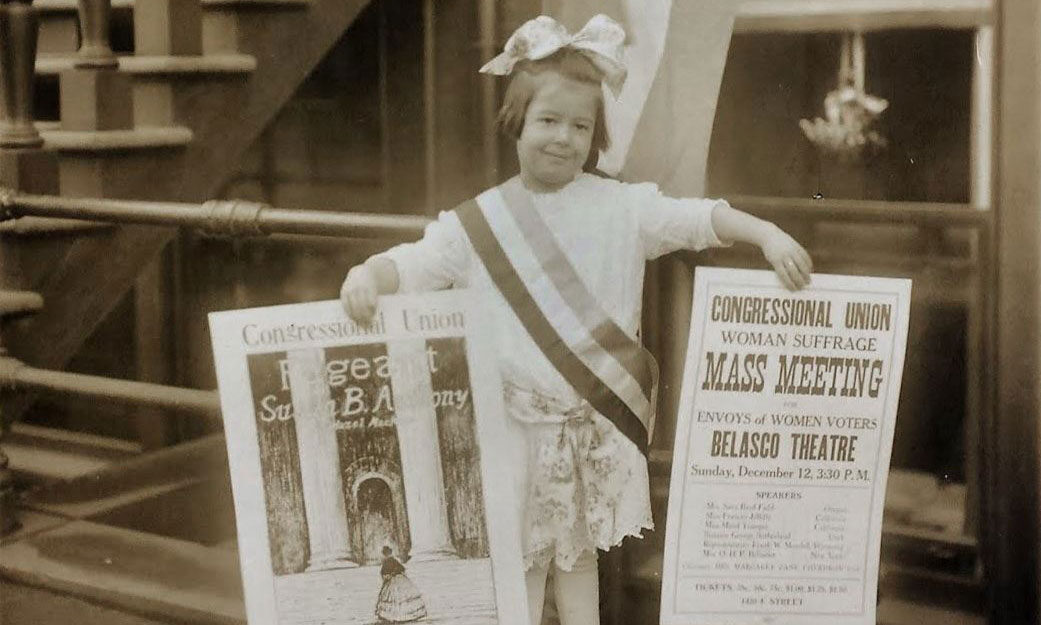 And still, she persisted

Women’s Suffrage at 100
August 2020 marked the 100th anniversary of ratification of the 19th Amendment, which allowed white women and black women outside of the South to vote.

Black women (and men) in the South, other women of color, and women in U.S. territories faced a range of restrictions and achieved the vote at different times, with a final guarantee established by the 1965 Voting Rights Act.

Anne Manuel, a political science lecturer who teaches political theory and feminist theory at the University of Michigan, says women have made the U.S. more democratic, but obstacles — ranging from gender bias to voter suppression — continue nationwide.

How did the concept of citizenship change with the passage of the 19th Amendment?

Suffrage activism reopened the question of equal citizenship and suggested that the answer to the question — “Who is a citizen?” — could be once again revised and expanded. Though suffrage activists made problematic compromises, for example to accommodate Jim Crow racial exclusions in the South and did not fully support the voting rights of people of color, the 19th Amendment established that political action by women could lead to a reimagining and redefinition of citizenship.

Why is it important to remember there was dissent within the suffrage movement?

Suffrage activists debated among themselves about what their goals should be, how to achieve their goals, who should lead the movement, and who should be included in the movement. Many felt they had to forge uneasy alliances and make political compromises. Some argued then that other suffrage activists were “too pragmatic” and too focused on the vote, and that they sacrificed the full inclusion of all women in the name of expediency. Reflecting on these controversies and choices is useful as we orient ourselves to today’s political challenges where the same debates resonate: goal-setting, leadership, and inclusion.

How did suffrage activists change the way we think about activist tactics in the public sphere?

Suffrage activists were fighting for women’s political dignity. The vote was a symbol of dignity, but they also refined and popularized political tactics that some would call undignified, such as the relentless public picket and the prison hunger strike. Women inserted themselves into public space by speaking, holding signs for days on end, and putting their bodies at risk when force-fed during prison hunger strikes. Suffrage activists pioneered tactics that would be used in subsequent political movements such as anticolonial movements overseas and the U.S. civil rights movement. Suffrage activists modeled both dignity and tenacity.

Suffrage did three things: (1) it brought women’s votes into elections; note that women vote in higher numbers than men, and the gender gap in presidential voting that emerged in the 1980s shows that women’s votes do not mirror men’s votes; (2) it created the opportunity for women to serve as elected officials; and (3) it struck a blow against the idea that women are dependent, second-class people who ought to exist only in the private sphere of the home.

How does this anniversary highlight voting rights issues we face today?

The resistance to suffrage made clear that some people did not want other people to be part of the democratic process. A version of this conflict shaped the civil rights movement and was addressed by the 1965 Voting Rights Act. Today, we see similar efforts to limit the voice of some when polling places are closed or understaffed, voting rolls are purged, and voting by mail is politicized. —  Jared Wadley

Suffragist Lucia Voorhees Grimes, BA 1902/MA 1906, cracked the code of suffragism soon after she joined the movement. By 1912, as recording secretary and chairman for publicity in the Wayne County Equal Suffrage Association, this teacher by training had been shut down repeatedly by opponents who felt a woman’s place was in the home — taking care of her babies, no less.

“I am at home,” she reportedly snapped while phoning to rent a car on behalf of the association. “My housework is done, my baby has had her bath and is now asleep, and you know a woman can still talk.”

As her role in the fledgling movement grew, Grimes adopted a stealthier move to disarm her opponents. She learned to make lace. The tactic allowed her “to be able to sit in various meetings and look completely domestic even if I had to make a suffrage speech.”

An organizer by nature

Grimes was hardly domestic. As a young girl, Lucia helped run the Voorhees family farm after her father died. At the same time, she was such a good student that she was offered a teaching position before she even graduated from high school. She left smalltown Illinois to earn her bachelor’s degree and teaching certificate at U-M with a focus on English and history. She traveled to the Upper Peninsula and Oklahoma City to pursue her career.

In 1907, she married the man she met her first day in Ann Arbor, George Grimes. He was an instructor in mechanical engineering at U-M, and a foundry specialist. They settled in Detroit and George founded the Grimes Molding Machine Company, where Lucia would work as a purchasing agent. She also taught at Cass Tech High School for 20 years (1928-48) and put in considerable hours toward a doctoral degree.

Though she dabbled in the women’s movement as part of the College Suffrage League, she fully immersed in advocating for the women’s vote beginning in the 1912 election year. Michigan’s Gov. Chase Osborn had succeeded in getting the state legislature to put a suffrage amendment on the ballot and the Equal Suffrage League of Wayne County was on a mission. Grimes was chair of the league’s political department.

When Election Day came around, the women assigned themselves to various voting booths to prevent voter fraud. Grimes sensed the chairman at her booth was dismayed when she arrived. According to an article at the Historical Society of Michigan, Grimes described the man as being “somewhat disturbed” and needing to “balance himself by putting his hand on the wall.”

The suffragists were defeated that year, and the next. Grimes knew the movement needed a new strategy to break the stalemate. She created an index card filing system that tracked each member of the Michigan legislature. In addition to recording each politician’s view on suffrage, Grimes’ fellow activists made note of personal details about each legislator: their family status, religion, health, and hobbies. The cards served as valuable tools while lobbying lawmakers and provided salient talking points. Patterns began to emerge and the suffragists acted accordingly. For example, if a politician voted according to opinion in his home district, the league might schedule a rally to show that the district was in favor of suffrage.

“You had to know who you knew,” Grimes was known to say.

Her methodology came to be known as “the pressure system,” and was so effective it attracted national attention. In the fall of 1915, Alice Paul, leader of the National Women’s Party, invited Grimes to Washington, D.C., to establish a national card system that could be customized to track the voting behavior and attitudes of members of the U.S. Congress. Grimes traveled to the capital with her five-year-old daughter Emily in tow. (Emily eventually would attend U-M too, earning a degree in journalism.)

Grimes spent five weeks in Washington completing her system. During that time, Emily was photographed holding posters promoting a Susan B. Anthony pageant. The image (above, courtesy of U-M’s Bentley Historical Library) was published in newspapers nationwide.

The National Women’s Party maintained Grimes’ card catalog for four years until Congress passed the 19th Amendment, which was ratified Aug. 18, 1920. The “pressure system” is credited with being a powerful influence in helping to pass women’s suffrage. In fact, Michigan was one of the first three states to ratify it on June 10, 1919. ⁠

That same year, Grimes began a six-year term as Detroit School Inspector. She remained a staunch and active advocate of women’s rights throughout her life. In 1920, in recognition of her contribution to the suffrage movement, she was elected chairman of the Legislative Council of Michigan Women. She served as recording secretary of the Campaign League of Detroit and was founder and president of the Wayne County Republican Women’s Club, where she held a leadership role for five decades.

Grimes passed away in 1978. She was inducted into the Michigan Women’s Hall of Fame in 1995.

Sources: The Bentley Historical Library, the Historical Society of Michigan, Michigan Women Forward, and ‘Her Hat Was in the Ring.’