Can we turn COVID into a climate opportunity? 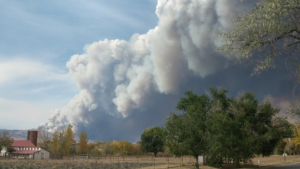 Though I’d planned to write about the potential of new climate opportunities that may arise post-pandemic, I changed my mind in the 11th hour. Let me explain.

I live in Colorado. On Saturday, Oct. 17, 2020, while standing outside, a friend pointed toward the northwest and asked, “What is that?”

It was a clear day (rare of late) but for a distinct gray front of smoke. I assumed it was smoke generated by the Cameron Peak fire, which is entering its third month. Thanks to Cameron Peak and other fires, the sun and moon often are often obscured; the air smells of campfire and the air quality is objectively unhealthy.

When a fire is, say, 40 miles away, it is unusual to see such a distinct gray front, complete with billows of turbulence. It would be mixed and diffuse by the time it got as close as this smoke was. But within minutes, my Saturday smoke was rising into the air, like an explosion.

This was the start of the CalWood fire, and in just a few hours it had burned more than 7,000 acres and several houses, and forced residents to evacuate homes in the mountains. I watched as the fire jumped from peak to peak in the small hills and hogbacks that separate the foothills of the Rockies from the plains to the east. The fire lit the grasses and crossed the highway before its eastward reach was controlled.

The explosion of the fire was, in a word, stunning. 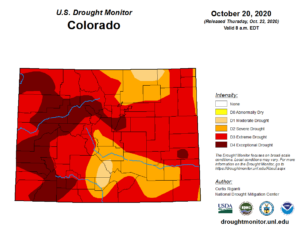 Much of Colorado is in extreme drought right now, trending toward exceptional drought. When the needles on the trees are that dry the speed at which fire travels is visceral; it strikes deep into our primitive sense of survival.

On the following Wednesday, as the sun was setting behind the mountains, I looked to the west and saw a cloud unlike anything I had ever seen. Again, it was smoke, and it towered over the mountains. It dwarfed Saturday’s cloud. As on Saturday, I could see form in the cloud — eddies, structures, shades of orange, grey, and black.

This was the explosion of the East Troublesome fire, a massive inferno that had been brooding for a while and grew from about 20,000 acres to more than 120,000 acres in less than a day. Again, it exploded. Whole towns were evacuated instantaneously. Thursday, cars snaked along highways that were re-routed to exit the mountains.

In the past decade, the fires on our planet have been astounding, from Australia to Canada’s Yukon. In wet season-dry season climates, like much of the U.S. West, fire season now comes early, stays longer, and is primed to burn. Much has been written about the role climate change plays in these fires.

The intuitive story seems basic: The planet is warming. If it is dry and turns to drought, the warming amplifies that drought. The vegetation is drier, igniting more explosive fuel.

Some claim it’s our policies, not climate change, that are to blame for all this destruction. Others claim the opposite. But such arguments set up a false binary with no good options; they only provoke fruitless political banter. The fact that we do not manage our forests well even as we build or behave foolishly does not eliminate the effects of a warming climate. 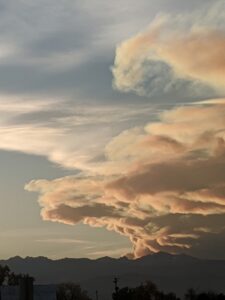 There are other ways climate change exacerbates fires in the U.S. and Canadian West. Vast stands of dead trees, victim of the pine beetle, add another layer of complexity to forest management. One might assume they would act as tinder, but they burn differently. They lack the dry needles of drought-stricken living trees.

After the fire abates, the ground is charred and flood-prone. With each hard rain, the flood conditions are amplified — again, because of a warming climate. Those floods will carry burn-injured soil and debris into our water.

Regrowth in the soil does come after the fires. However, the plants that return will have to adapt to a warmer climate with a different seasonality of moisture. In the next century, it will take mere decades for the climate to change to the same degree it changed over the centuries and millennia following the ice ages.

The increasingly catastrophic fires of the U.S. are something we understand at a fundamental level. They are not a mystery. Since we understand them, we can better adapt to them. If our management of forests and our building behavior can be argued as a part of the proximate cause, then changing that behavior is the most effective lever of near-term change.

Science offers us knowledge that the future will be different, and we glimpse into that future in our rapidly changing present. However, it is enormously complex, with unknown behaviors. We are encumbered by ignorance of the details and dependencies that will emerge.

We must, however, shift to a behavior where we use our knowledge to adapt, learn, and build good futures. In many ways we are losing our past, our anchor in nature. We have to let that go. Our ability to thrive requires us to shape our individual and collective realities, and our unique-in-history knowledge of science-based descriptions will help direct our path.