Loss is the game 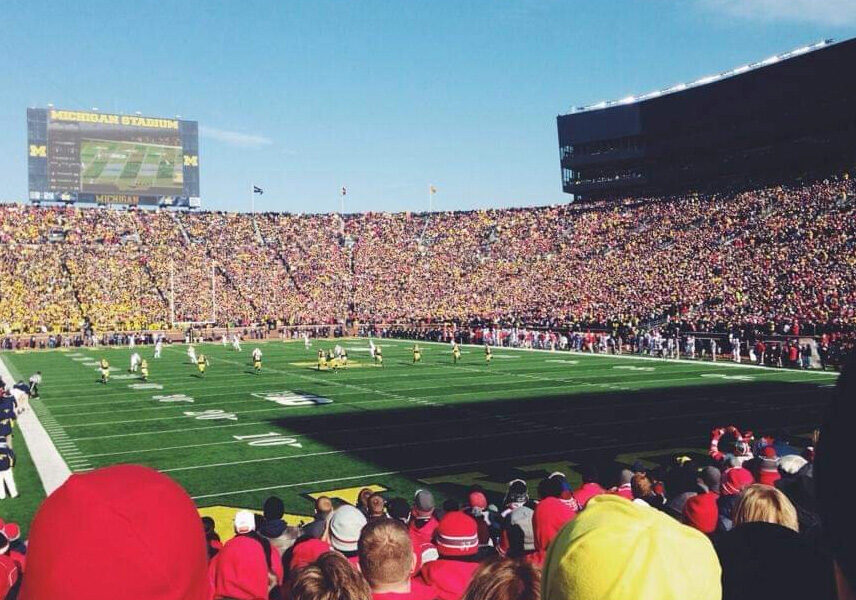 “All is well, as long as we keep spinning.”

Before he left San Francisco, Michigan’s Head Football Coach Jim Harbaugh said he “hated the way the sun always beat down on you in California.”

I left Michigan for California 15 years ago. The brochures failed to mention anything about the harsh reality of summer in the parts of California where one can actually sort of afford to live. Suffice it to say that summer in East San Diego County makes me feel like I’ve done something to trigger the Almighty’s deep displeasure. Bend down and hear me now: I repent.

A Michigan November may look dead and sad, but that’s just how it appears. Even with the notoriously inhospitable winter looming ahead, and with only bare trees and smoke-colored sky remaining from the by-then-extinguished fall foliage inferno, late autumn is cherished by many Michiganders I know because of the reunion that takes place at a different kind of season’s end.

After getting ready to go out one evening, I walked out of my bathroom to find an Ohio State t-shirt laid flat on my bed. My wife had assumed that since I like Michigan, I must also somewhat like Ohio State — you know, since they play each other and all.
My brother Jordan McGlashen believed that the mixture of Michigan’s Maize-and-Blue and Ohio State’s Scarlet-and-Gray when the two football teams met each November had the fingerprints — unseen but unmistakable — of the Divine. For many of us who grew up with “The Game,” and live or grieve depending on its outcome — on both sides of the rivalry, I suspect — it’s as if the two sets of colors are the combination that unlocks a door to the place behind everything else. It’s one of many doors perhaps, but we’re all supposed to find what’s back there.

My wife, Nicole, a California girl, didn’t understand at first. A fellow Michigander joked that she “didn’t even know how to spell football” before she met me. After getting ready to go out one evening, I walked out of my bathroom to find an Ohio State t-shirt laid flat on my bed. Nicole had assumed that since I like Michigan, I must also somewhat like Ohio State — you know, since they play each other and all. The shirt was a “gift” for me.

Things are different today. Trailing heavily-favored Ohio State 42-41 in 2013 — the first college football game she ever attended — Michigan was about to attempt a game-winning two-point conversion when Nicole was moved to tears by the awe and wonder that had come over my face, and by her own recognition that before her was more than a field, helmets, and a two-point attempt that would ultimately fail. 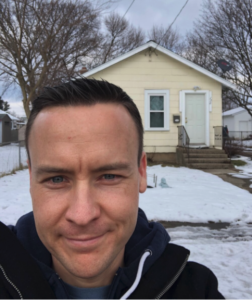 “The Shoebox” was John McGlashen’s home where he and his sons, B.J., Jordan, and Collin (pictured) watched Desmond Howard strike the Heisman pose during Michigan’s 1991 victory over Ohio State. (Photo taken Feb. 11, 2020, hours after John’s funeral.)

To me, The Game has all the markings of a dysfunctional family, but it’s a family nonetheless. Endless bickering, constant measuring of ourselves against the other, living eternally rent-free in each other’s head, and yet we have long agreed to meet once a year on a holiday weekend (in pre-COVID times). This could explain why the cancellation of the 2020 edition of The Game – before the season was mercifully resurrected – felt like the death of someone close to me.

After all, The Game and I have been through a lot together.

From the day I was born in 1983 until I left for college, Michigan dominated Ohio State (13-4-1). The home in which my father, John McGlashen, lived in the late ’80s and early-’90s was nicknamed “the Shoebox.” Its multiple-shades-of-brown, shag-carpeted living room also served as a dining room and bedroom. My father slept on the couch once a week and every other weekend while his three boys, B.J., Jordan, and I, slept in the main bedroom. His beloved daughter, Kaitlin, had the second bedroom.

That living room was the birthplace of our Michigan fanaticism. It was the theater in which we watched Desmond Howard return an Ohio State punt 93 yards for a touchdown en route to a 31-3 victory in 1991. Our widened eyes then saw one of college football’s iconic moments as Howard celebrated the score by striking the pose of the Heisman Trophy he would win three weeks later.

The late ’90s saw Dad re-divorce and lose his job at the same time. In a new and even-smaller living room we watched Charles Woodson’s epic performance in a 20-14 victory over Ohio State in 1997. From that living room my brothers, friends, and I ran screaming out into the street after Michigan captured a share of the 1997 National Championship in the Rose Bowl. And into that living room I burst, because he didn’t have a phone on which to call him, to show Dad my acceptance letter to the University of Michigan. He yelled, leaped up out of his seat, and gave me a celebratory hug for the ages.

Unfortunately, my arrival on campus in the fall of 2001 coincided with Jim Tressel’s arrival in Columbus. 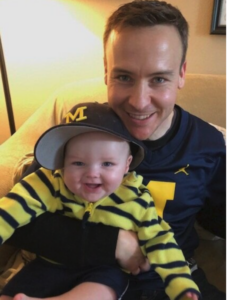 A wide receiver on the 1991 Michigan Wolverines, Yale Van Dyne — the greatest name and wide-receiver number (34) ever printed on a Michigan jersey — had two catches against Ohio State, just one short of Desmond Howard’s total for the game. Pictured are Collin and Yale McGlashen moments before kickoff Nov. 24, 2018. Ohio State 62, Michigan 39. (Photo courtesy of Collin McGlashen.)

One of Michigan’s two victories since 2001 came in 2003. On my walk to the stadium that day, I acquired a hat from a marching band member’s uniform. How? I’m hazy on the details. And while the day’s victory was glorious, I’m haunted by the thought that my acquisition may bear some responsibility for how the rivalry has turned out since. Do you think it’s the hat the Almighty’s upset about? (If it’s your hat, I want/need you to have it back. It’s on my two-year-old son’s wall. He won’t miss it.)

In 2005, I was kicked out of Michigan Stadium in the first quarter after I knocked a hat off the head of an Ohio State fan who had the audacity to use the same bathroom as me. I had to settle for screaming at my living room TV as Michigan blew a 9-point fourth-quarter lead. This portended a drinking problem that also got me thrown out of a San Diego bar after watching the 2007 Game (a 14-3 Michigan loss that kicked off at 9 am on the West Coast, putting me in “throw him out of our bar” condition some time around noon). The drinking problem would be dealt with soon after.

But two games top the 19-year pile of emotional suffering: 2016 — a 30-27 double-overtime Michigan loss which an OSU fan tried to convince me saw bad officiating “on both sides” — and 2018 — a 62-39 blowout loss for which MGoBlog’s Brian Cook provided the only plausible explanation: “This is Hell.”

The Game has been an excruciating experience for half of my life. But would I rather Michigan not play at all?

Since we’re now scheduled to play Dec. 12, we still have a chance to turn it all around — to make things right.

I didn’t think I had anything that needed to be made right with Dad. But now that he’s gone, I sometimes struggle with regrets. Years ago, on my trips home from California, I’d split my vacation between family and drinking. I missed a tee time with my Dad as a result. He was disappointed, but, as always, he got past it. He was always excited for my next trip home. Then came the last trip in January 2020. Not expecting us, as soon as he caught sight of me, his eyes opened wide. Unable to talk or lift himself up, he used all his strength to reach his arms out and embrace me.

He died the next day.

The year of COVID 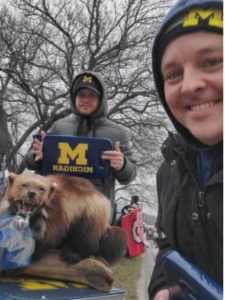 Brothers: Jordan and B.J. McGlashen (and a Wolverine) outside Michigan Stadium before the 2019 edition of “The Game” which the brothers attended. Ohio State 56, Michigan 27. (Photo courtesy of Collin McGlashen.)

On May 5, reflecting on the season of loss that 2020 had become, I wrote a note to myself: “What do I have but the nothingness this year has become?”

My buzzing cell phone woke me up at 5 a.m. on May 7, my brother Jordan’s 39th birthday.

Imagining Jordan’s last moments is what constricts my breathing these days. Did he know what was happening? Did he cry? Was it like when Michigan lost the 1993 National Championship game? Jordan wept from his 11-year old knees atop a Michigan Wolverines blanket.

And then what? Did he hear singing? Jordan, Dad, and I traveled to Champaign to watch Michigan’s 2007 comeback victory over Illinois. Afterward, we joined the choir of exiting Michigan fans in singing “The Victors” walking down the built-for-echoes concrete ramps in one unified, thundering, and triumphant voice. Did it sound like that?

Are you both OK now?

What do I have left?

“When I arrive, will you come and find me?”

And then I remember. As much as the sun beats down on me, and as much as it can feel like Hell here, I love how the setting sun can sometimes hit East San Diego’s mountains. It reminds me of how sunset at the Rose Bowl appeared on the living room TV. 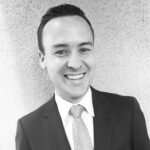 COLLIN MCGLASHEN is a 2005 graduate of U-M's College of Literature, Science, and the Arts. He lives in El Cajon, Calif., with his wife, Nicole, and their three children. He is district director for California State Senator Brian Jones, representing over 930,000 residents of San Diego County. The original, expanded version of this essay from August 26, 2020 – before the Big Ten football season was restored – can be found here.
Social
Share on: Share on Twitter Share on Facebook