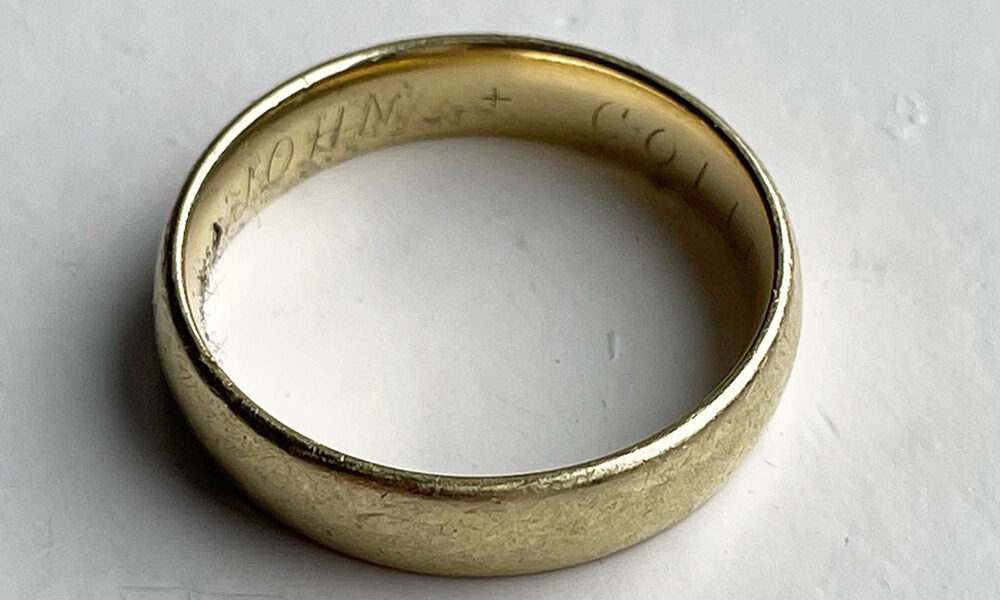 “There’s something very magical about tiny, sacred objects finding their way back to their owners.” Sara Grace, Facebook, Dec. 5, 2020

The Facebook post, dated Dec. 1, pictured a close-up shot of a gold wedding band on a white background. A glimpse of an engraving was barely visible.

“Are you John or Colleen?” posted Matt Sherman of Brooklyn, N.Y. “Did you recently lose a wedding band, possibly near Henry and Atlantic in Brooklyn? If you are one of these two people or know the couple, would you please put them in touch with me? I would love to return it!!! PLEASE SHARE!!!”

As the quest to find the proper ring finger beamed out via social media, John Tebeau, BS ’86, was carefully combing the Brooklyn apartment he shared with his wife, Colleen Newvine Tebeau, MBA ’05. He was desperate to find that very same wedding band.

“It’s one of my superpowers, losing things,” John says.

He searched for days before telling Colleen he’d lost it. Then they both looked together. “Nada,” Colleen says. It did not occur to either of them to check social media. Why would they? 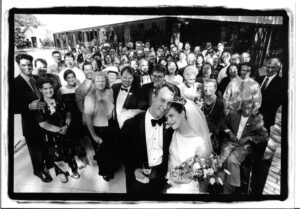 Michigan alumni John Tebeau and Colleen Newvine Tebeau were married in Ann Arbor in 2000. (Image courtesy of the Tebeaus.)

The Tebeaus met and married in Ann Arbor in 2000, before moving to New York in 2006 and settling in Brooklyn in 2009. Colleen is a marketing consultant and coach, as well as part-time product manager of the AP Stylebook at the Associated Press. John is a digital communications/marketing consultant, as well as an accomplished artist, author, photographer, and bartender.

He also is a realist. When it looked as though his wedding band was gone for good, John sent up a prayer to St. Anthony. Perhaps the patron saint of lost objects would answer his plea.

“I lose a lot of stuff, so even though I’m not Catholic, I know the St. Anthony prayer by heart, because hey, you never know,” he says. 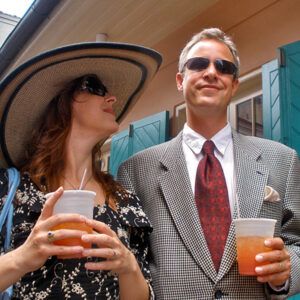 John Tebeau supplied this photo of the couple in New Orleans because “it shows both wedding rings.” So sweet. (Image: Lisa Jo (Farley) Sevcik, BA ’85.)

A few nights later, a woman in the Brooklyn Heights group for the @buynothingproject sent Colleen a private message. Did her husband, John, lose his wedding ring? Because she had just seen a post in a neighborhood mom’s group about a found ring engraved “John + Colleen.”

Colleen was certain it was John’s ring! She searched out the original post on Instagram. The poster was Matt Sherman, chief marketing executive at New York’s Handsome Brook Farms, an industry leader in organic, pasture-raised eggs. Colleen noticed Matt followed a University of Michigan account, “an interesting coincidence.” When she messaged him to claim John’s ring, she asked if he by chance went to Michigan … and discovered he graduated not just from Michigan, but from Michigan Ross — with an MBA degree in 2005, the same school and year she did.

She was dumbfounded and posted to her FB account: “Come on, in a city of 8 million people, our hero has the same Michigan diploma and degree I do? If I saw this set of coincidences and connections play out in a Tom Hanks & Meg Ryan movie, I would roll my eyes all the way back in my skull.”

Those coincidences and connections began to emerge when Matt Sherman took his daughter to the dentist Dec. 1 and his eye caught something shiny in the leaves next to the curb.

Matt examined the gold wedding band and noticed a worn inscription. He struggled to make it out.

When Matt and Colleen connected in hopes that he found John’s ring, Matt said, ‘If this is real, it is the best damn thing to happen this year.’”
“I finally realized it was two names and a date and I was like, ‘Holy crap! Not only is this someone’s wedding band, but I might actually be able to track them down.’”

After a chat with the dentist and hygienists about how small a world Brooklyn can be, Matt came home, photographed the ring on his windowsill, and posted his message to Facebook and Instagram.

Matt’s wife, Sharon, shared the notice at their elementary school’s alumni listserv. (Sharon also is a Wolverine, Class of 2004.)

Within a few hours, the connection to Colleen was made.

Matt initiated his own online research, and was just as surprised as Colleen when he identified the Michigan connection. “The network is real!” he says. “And then I saw Colleen graduated in 2005 from Ross, and I thought, ‘Wait, do I know her? What section was she in?’”

All roads lead to A2 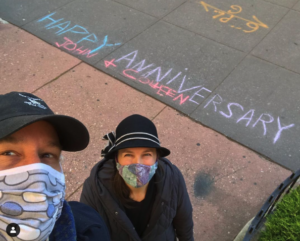 John and Colleen outside their apartment where fellow Wolverine, Jessica Broome, PhD, had written a chalk greeting for them to mark their 20th anniversary. (Image: Instagram.)

Though they’d never met, the couples do live in the same neighborhood and share several U-M connections, Michigan Ross friends, and random Facebook friends. Once they connected, Matt told them where he found the ring, and it all made sense to John and Colleen. That pile of leaves was just across from Long Island Bar, a favorite watering hole.

“We sat outside and had drinks there one chilly evening, and the best we can figure, maybe John’s hands got so cold that his ring slipped off, and he didn’t hear it because it fell in the leaves,” Colleen says.

Matt says the couple was “so nice and gracious,” but he had to be sure the ring really belonged to them. The inscription included their wedding date, so he asked each one individually to tell him their anniversary.

“I felt like I should just double-check (though I had no doubt it was theirs),” he says. “It really was because they just celebrated 20 years, and I wanted to say congrats!”

St. Anthony to the rescue 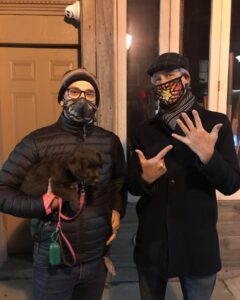 Matt Sherman (left) makes sure John Tebeau’s ring got back on his finger in record time. (Image courtesy of Tebeau.)

The wedding band was back on John’s finger by Dec. 3.

“I’m lucky as hell, so it wasn’t a huge surprise when it was found,” he says. “But still, my first thought was, ‘St. Anthony, you’ve done it again, by Jove!’

“Then I saw the Instagram pic of my ring, all close-up and personal, and I thought buying a new ring to celebrate our 20th year wouldn’t have been so bad. Colleen was tickled pink, though, so that made me pretty glad. ‘Happy wife, happy life,’ as they say.”

Colleen finds symbolism in how beat up John’s ring is. “That’s the physical evidence of the two decades we’ve spent together,” she says. “And having someone in the Buy Nothing community save us from having to buy a new ring to replace it felt poetic, too.”

To show his appreciation, John wrote three checks to three charities with “for St. Anthony” in the memo line.

The joyous social media posts that followed the tale are a precious reminder of the need for love and connection after such a dark and sad year.

Colleen posted a shout-out to her Ross FB friends who did know Matt in b-school: “Mary Hallahan and Darren Rich, your section mate is a hero!”

Matt was as thrilled to return the ring as the couple was to reclaim it. “I told Colleen, ‘If this is real, it is the best damn thing to happen this year.’”

He played it cool online, though, despite the fact that he basically pulled off a maize-and-blue miracle.

“Honestly,” he posted, “the lesson for us all: Engrave your wedding bands!”

Note: Both Colleen Newvine Tebeau and John Tebeau have contributed to Michigan Today. Read Colleen’s coverage of Burning Man at MT, featuring photos by John. Read about John’s love affair with awesome watering holes in What’s the Buzz at MT.