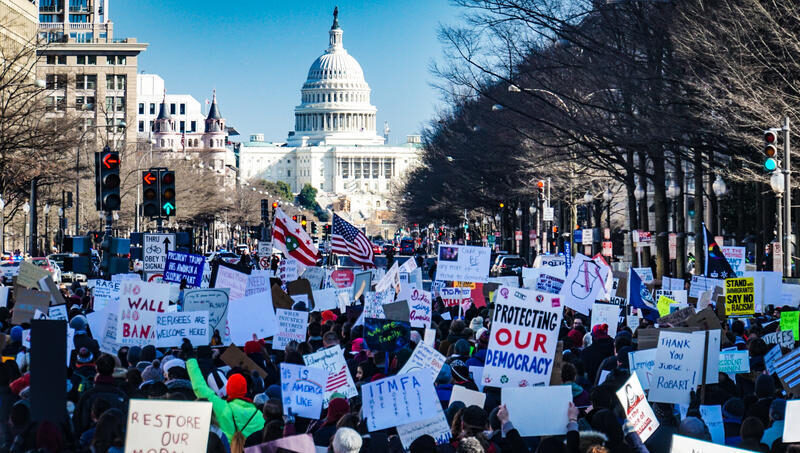 ‘Disturbed — but not surprised’

Pro-Trump protesters and rioters, who were incited by the president’s message Jan. 6 regarding unproven fraud claims during the elections, stormed the U.S. Capitol in an unprecedented move of insurrection. We invited University of Michigan experts to discuss.

Javed Ali, the Towsley Foundation policymaker in residence at the Ford School of Public Policy, is a former senior U.S. government counterterrorism official.

“I’m disturbed — but not surprised — by today’s events on the Capitol,” he says. “A series of interconnected developments over the past year, including populist anger over government-imposed restrictions with COVID-19, the deeply polarized state of the nation’s political climate, a heightened level of disinformation and misinformation spread not only by conspiracy theorists but elected officials in Congress and the White House, and the role of social media in fueling these narratives, have all combined to trigger the spectacle.

“We are witnessing a coup and an attempt to subvert American democracy. What makes us a constitutional democracy is adherence to the Constitution, even if we don’t like the outcome.” — Josh Pasek, Center for Political Studies
“As a nation of laws and rules, Washington, D.C., authorities, in concert with federal partners, must work to retain order and allow the election certification process to continue, while ensuring the safety of members and staff.”

Jonathan Hanson, lecturer in statistics for public policy, worked as a legislative assistant in Congress.“The warning signs that something like this would happen have been in plain sight,” he says. “Trump was never going to accept defeat, and only a small number of Republican officeholders have been willing to stand up against his repeated lies about electoral fraud. Worse, many of them have cynically repeated these claims and exploited the anger for their own political gain.

“Today should have been a routine ceremony. Instead, Trump incited his supporters, and the result was a very sad day for democracy. Instead of making America great, he has left a permanent stain on our political system.”

Josh Pasek, associate professor of communication and media and faculty associate at the Center for Political Studies, explores how new media and psychological processes shape public opinion and political attitudes and behaviors.

“We are witnessing a coup and an attempt to subvert American democracy,” he says. “What makes us a constitutional democracy is adherence to the Constitution, even if we don’t like the outcome. What we are seeing is an attempted coup and is the sort of thing we typically don’t expect to see in the U.S. That the president is an instigator rather than putting an end to this threatens the country and reflects an abandonment of his oath of office.”

What factors caused the Capitol insurrection?

Javed Ali, counterterrorism expert and Towsley Policymaker in Residence at the University of Michigan’s Ford School of Public Policy, addresses possible factors that may have caused the insurrection at the U.S. Capitol in the videos below.

Did race play a role?

“The violence at the Capitol today is the natural and foreseeable consequence of the incitement and general conduct of the most irresponsible president in American history, enabled by too many people in power who would not stand up for decency and the norms of American constitutional democracy,” he says.

“[The action of the mob] is a seditious act unlike anything since the Civil War. The tear in our civil and political fabric will be difficult to repair.” — Michael Traugott, Center for Political Studies

“The action of the mob in Washington, incited by President Trump, is an unprecedented affront to the peaceful transfer of power on which our democracy is based,” he says. “It is a seditious act unlike anything since the Civil War. The tear in our civil and political fabric will be difficult to repair.”

John Ciorciari is an associate professor of public policy and director of the International Policy Center and Weiser Diplomacy Center.

“To allies and partners around the world, and to ordinary people struggling under oppressive rule, American democracy has long been a beacon — an imperfect model, but nevertheless one inspiring hope and emulation,” he says. “Today, the light emanating from what Ronald Reagan called the ‘shining city on a hill’ is dimmer than it has been at any time in the decades since he invoked the phrase.

“Observers around the world marvel at images reflecting the vulnerability of the Capitol Building and the democratic norms it represents. They may invest less in their relationships with the United States, unsure that its domestic institutions will remain strong enough to enable a robust American role abroad. Their own confidence in democracy may also diminish as the putative leader of the free world turns to the dictator’s playbook, inciting a desperate and violent effort to cling to power.”