A feature, not a bug

It should come as no suprise to Michigan Today readers that your crack editor is not exactly Lois Lane. Writing always was my interest, not reporting. In Michigan News meetings, I sit in the “features” chair, surrounded by impressive colleagues with pedigrees from the Associated Press, the Detroit Free Press, the Rocky Mountain News, and the Atlanta Journal-Constitution, among others. They talk about public health advancements, climate change, and black holes. When it’s my turn, I talk about the curator who handles Benedict Arnold’s correspondence at U-M’s Clements Library. 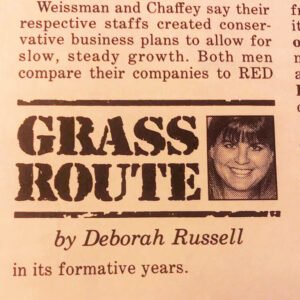 I wrote a Billboard column called “Grass Route” about the indie record business. Later, I had a music video column called “The Eye.” I also had a very tight mugshot and a different last name.

I did have a seven-year stint at the music industry “bible” Billboard, where I wrote about independent record labels (Sub Pop!) and music video directors (David Fincher, anyone?). So I am familiar with the alcoholic rock critic, the loud-mouthed sales guy (Marv!), and the “All About Eve” cub reporter who gets her first column at age 21. But still, I feel like an imposter among “real” reporters, having only ever worked at a weekly — and a weekly trade at that.

After you’d hit “send” by noon each Wednesday, you’d wait by your phone for the call from New York-based news editor Ken Terry. “Are you sure this is right?” he would say, a hint of East Coast disgust in his voice for us SoCal slackers. “Check your notes.” “Call him back.” “I can’t believe you didn’t ask THAT.”

That only had to happen once before you made sure to know every possible answer to every possible question before it was your turn to be “Terry-ized.” (Now I just have you, dear readers, to bring the monthly agita.)

When the term “fake news” secured its tragic place in the modern lexicon, I was at first insulted. How could any sane person believe someone would enter the world of journalism with the intent to produce bogus content? The concept is anathema to everything we learn in j-school, let alone a newsroom. Few sensations are more agonizing to a reporter than having to file an actual correction. I cried real tears in college when I spelled a source’s name wrong. And I never did it again.

But then “fake news” suddenly was everywhere, dressed up in logos and pretty websites to look as real as real can be. The stories were so outrageous, I was sure we were safe: Politicians eating babies, microchips embedded in vaccines, school shootings that were merely hoaxes. An election stolen right before our eyes, despite any proof a court would consider. How could anyone possibly believe this!

And then I tuned into the coverage Jan. 6, as our nation’s Congress prepared to certify the results of the 2020 presidential election. Suddenly the screen was overtaken by a dangerous, violent mob driven into a frenzy. They breached the Capitol. They desecrated the global symbol of democracy. They killed police. All in the name of fake news.

Soon after I sent Michigan Today, I got this note in my personal in-box from a reader named Wade Johnson. I contacted Wade and he agreed to let me publish his private response to my feature about Benedict Arnold, treason, and the events of Jan. 6.

“Jan 6th event was a protest, not treason you dumb c*nt,” Wade chose to inform me.

That asterisk is mine, not his. How about that for fake news?