‘My heart was shattered’ 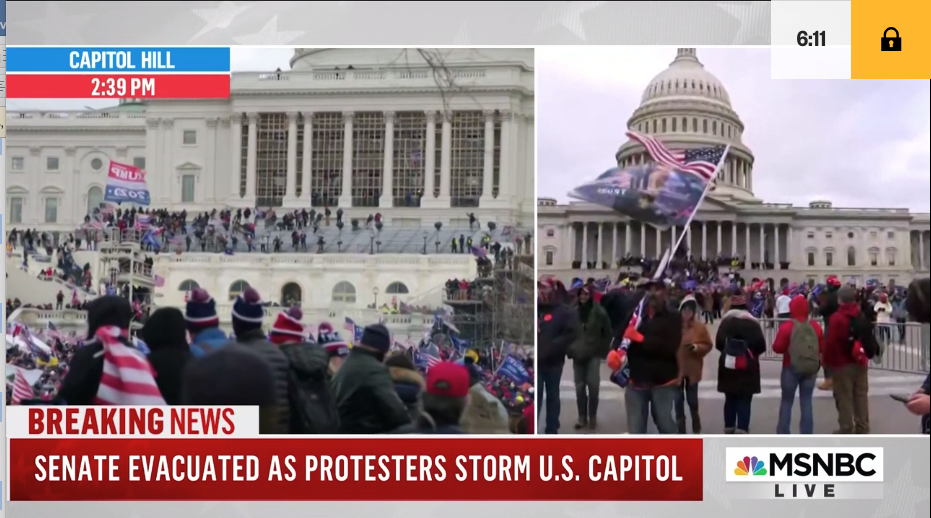 ‘It’s even worse than it was’

Eight years have passed since Congressional scholars Norm Ornstein, PhD ’74, and Thomas Mann, MA ’68/PhD ’77, co-authored It’s Even Worse Than It Looks: How the American Constitutional System Collided with the New Politics of Extremism (Basic Books, 2012).

Their blunt report on the unprecedented acrimony, hyper partisanship, and dysfunction in Congress cast Republicans as insurgent outliers at the heart of the problem. The party had become “ideologically extreme, scornful of compromise, and ardently opposed to the established social and economic policy regime,” the authors wrote. 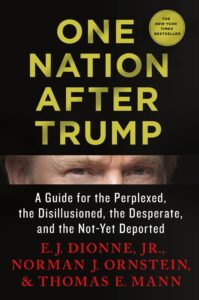 The book was a watershed for the centrist scholars, who’d been meticulously nonpartisan throughout their careers. Mann is a senior fellow in governance studies at the Brookings Institution and resident scholar at the Institute of Governmental Studies, University of California, Berkeley. Ornstein is resident scholar at the American Enterprise Institute. They met as graduate students at U-M and have been friends and collaborators ever since.

When we first spoke in 2013, Mann and Ornstein joked their next book likely would be called Run for Your Lives. At that point, it was still unfathomable that American citizens would one day breach the nation’s Capitol intent on overthrowing the results of a free and fair presidential election. While the whimsical title is more apt today than ever, the book they released in 2017 actually was called One Nation After Trump (St. Martin’s Press.) E.J. Dionne co-authored.

“We got the ‘after Trump’ right, but we have a long way to go to learn to live as ‘one nation,’” says Mann. “None of this dysfunction will disappear with Trump out of the White House.”

When asked how he felt on Jan. 6, Ornstein says, “My heart was shattered. If you care about the country, I don’t know how you cannot be horrified.”

Below, these longtime Congressional experts share some of their thoughts, fears, and possible solutions to the government breakdown. Making some key structural changes in government could facilitate the healing of our society, they say.

Run for your lives

THE GOP WAS PRIMED for a demagogic leader like Trump, Mann says. Seeds of division took root with the Civil Rights and Voting Rights legislation of 1964 and 1965. “The most substantial federal effort to end Jim Crow was key to dividing the parties shifting the defining issues from economic to cultural policy.

“By the 1980s, the parties diverged sharply by race, ethnicity, religion, abortion, geography, and traditional vs. cosmopolitan values. Republican leaders such as Newt Gingrich rallied conservative activists and voters by seeking to undermine trust in government and the legitimacy of those who ran it. Partisanship became a ‘mega-identity,’ and the divisions among elites penetrated the mass public.

“Trump’s presidency hardened the differences between the parties and mobilized violent, extreme-right groups that had heretofore been present but mostly marginalized in American politics.” 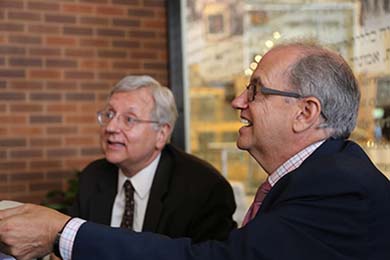 WE HAVE A BIG CULTURAL PROBLEM that may not be resolvable in this present age of communication if people continue cocooning and getting different sets of facts, Ornstein says. “It’s too easy for disinformation and deliberate distortion to take hold. That is not easy to resolve. But we can address structural issues: voting rights, the campaign reform questions, the way we conduct business in Congress, the partisan gerrymandering, and more. There are ways of doing this that don’t necessarily require a lot of Constitutional amendments.”

WE SHOULD NOT HAVE BEEN SURPRISED by the events of Jan. 6, Mann continues. “Trump had been calling for mass resistance to certifying the election for Biden and specifically set Jan. 6 as the time for physical action, otherwise known as insurrection. All of Trump’s words and actions after the election led directly to [the insurrection.] I was stunned by the success of the mob in penetrating the Capitol and meeting little resistance from security for over four hours.”

THAT WAS CLOSE “We are starting to understand this threat was graver than we realized. Clearly, there were terrible, malign actors who were organized and wanted to kill or kidnap people or completely disrupt government operations. They could have decapitated the entire government. There also were people caught up in conspiracy theories. But it doesn’t matter what the motives are. If you break through and enter the United States Capitol with the intent of causing mayhem, whatever your motives, you need to be put in prison for a long time. There’s got to be a deterrent of some sort.” 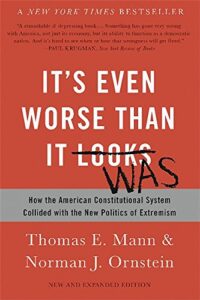 THE PATHOLOGY RUNS DEEP in the GOP, Ornstein says. “Members of Congress knew their lives were in danger [Jan. 6]. And still, two-thirds of the Republicans in the House voted that Biden’s election was illegitimate, and a quarter of the Republicans in the Senate did so, as well. I think the vast majority of them have no backbone and no moral courage. Most of them know full well that the election was fair, and it was not close. They’re just scared to death to take on the base. And, for some, it’s fear of being shunned by ‘the cult,’ which puts the fundamental freedom of the country at stake.”

CONTINUITY IS KEY “After 9/11, Tom and I created a continuity of government commission,” Ornstein says. The commission was co-chaired by Lloyd Cutler, White House Counsel during the Carter and Clinton administrations, and Alan Simpson, a Republican leader in the Senate. “We issued three reports on continuity of Congress, the presidency, and the Supreme Court. We focused mostly on a foreign terrorist threat, and ultimately, also on a pandemic. But as history tells us, inertia sets in, and we didn’t get very far. We still have no plan. It’s pretty clear we need a 9/11-style commission. I’m hoping the impeachment inquiry gives us more information about what went on.”

THIS ALTERS THE WHOLE LANDSCAPE for a free society, says Ornstein. “Part of our freedom was that people could go to Congress and watch the proceedings taking place. They could see their members of Congress right there. Now, we’re going to have another layer of removal. All of our elected representatives, including in the states, will have to be concerned about their safety. That’s not something we are used to in our lifetimes.”

THE GREATEST FEAR is that we will fail as a multi-racial democracy and descend into civil war and/or autocracy, says Mann. “My greatest hope is that the Republican Party is transformed into or replaced by a center-right governing party. In the next year, we can only hope President Biden and the narrow Democratic majorities in Congress will be able to deliver help to a citizenry ravaged by the pandemic and the economic fallout from it. The odds for success are long, but the alternatives would be devastating.”