‘Tis the gift to be life-changing 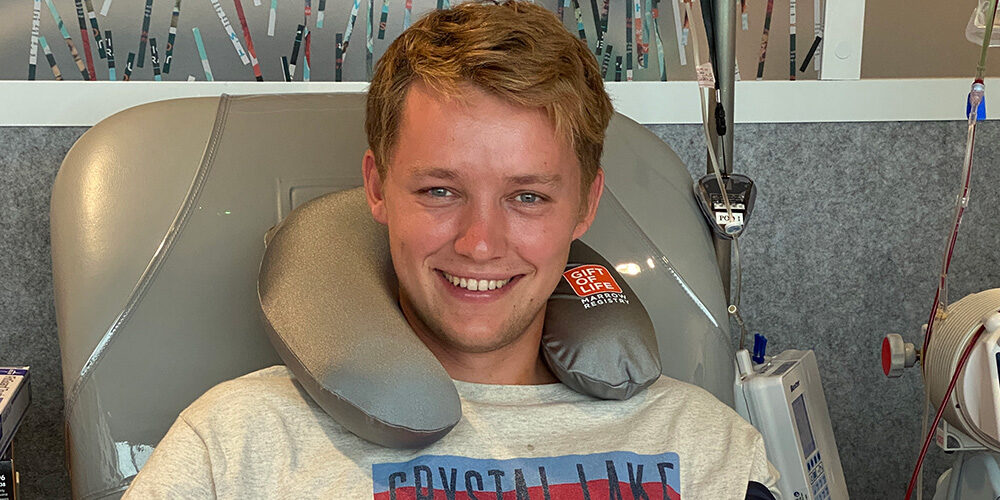 Brendan Dunn, BS ’20, relaxed into his seat at The Dr. Miriam and Sheldon G. Adelson Gift of Life-Be The Match Collection Center in Boca Raton, Fla. It was time for the Gift of Life team to take charge of his “donation vacation.” Dunn had learned he was a match to a patient in the international bone marrow and stem cell registry just in time for winter break. He traveled under strict COVID-19 protocols to offer up some peripheral blood stem cells (PBSC) to a person he may never meet.

The team asked a series of typical questions before the conversation took a personal turn. Did he have a favorite food? What were some of his strongest likes/dislikes? How about allergies? Dunn’s nurse told him that PBSC recipients have been known to take on some of their donor’s tastes.

“I think about that sometimes when I’m eating,” says Dunn, now in a health administration graduate program at Xavier University. He recently matched an anonymous female recipient in the massive Gift of Life database. “I wonder if she hates something now that she didn’t hate before. I just hope it’s not one of her favorites.” 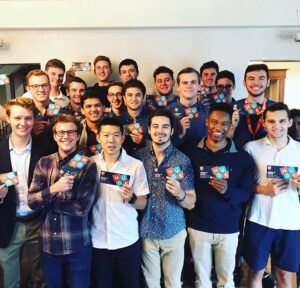 Dunn was the first of his fraternity brothers to make a match in the Gift of Life global registry. (Image courtesy of Gift of LIfe.)

When Dunn swabbed the inside of his cheek during a Gift of Life ambassador’s visit to U-M’s Kappa Sigma fraternity house, he wasn’t thinking about his favorite flavor of ice cream, or anyone else’s.

“It just seemed like a good cause,” he says, and one that didn’t require much effort on his part.

Gift of Life is accredited by the World Marrow Donor Association. Its goal is to provide life-saving treatment to the thousands of patients worldwide battling diseases like blood cancer, immunodeficiencies, and sickle cell. The organization’s website reports that an estimated one in 200 Americans will receive a stem cell transplant in their lifetime. Only 30 percent of patients will find a matching donor within their families. 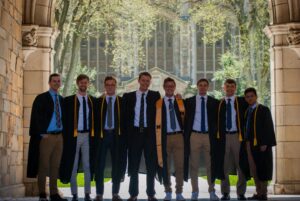 Back on campus, the registry ambassador told Dunn and his friends that chances were low they would hear from the organization any time soon, if at all. The tissue typing is so intense there is a 0.1 percent chance a donor ever will be called to donate to a stranger. It’s all about statistics, the ambassador said. As more people donate, the chances for a match increase.

“It didn’t cross my mind again until they called and said I was a match,” Dunn says.

He was the only one among his group of friends, and soon he and his cells were on a plane to Boca Raton. His girlfriend, also a member of the registry, accompanied him.

“This one small act can have a resounding effect,” says Marti Freund, director of organizational advancement at Gift of Life. Her own life was impacted by marrow donation, she says. “It reminds you of the good in people. [Brendan] wasn’t even deterred by the pandemic.”

Freund was one of the staff who welcomed Dunn to the collection center, which opened in 2019. It is outfitted to feel as comfortable and welcoming as possible with multiple entertainment options. Donors are treated like the heroes they are, she says. The organization arranges and pays for all travel, meals, hospitality, and more. Donating the PBSC cells is similar to donating plasma; it’s a one-day medical routine that lasts about four-six hours. 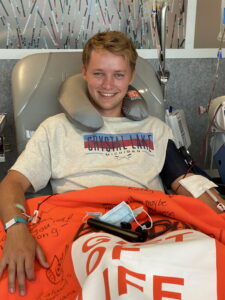 Dunn underwent the one-day, eight-hour procedure at Gift of Life’s donation center in Florida.(Image courtesy of Gift of Life.)

“It’s very easy once you become a match,” says Dunn of the experience and minimal side effects. “I left Florida with the same amount of cells I had the week before.”

Freund says she often is surprised by how casually donors agree to the life-changing procedure. “It’s so humbling,” she says. “People are choosing to save a life. It’s such a hands-on, impactful thing a person can do.”

Dunn is the humble one, though. “I’m a young person in good health and I lived with my parents; we followed COVID protocols,” he says. “I don’t think I’m a great person, but it does feel great to impact a person once they get the cells.”

The collection center remained open throughout the pandemic because “cancer doesn’t stop for COVID,” says Freund.

Though COVID-19 has temporarily derailed the campus ambassador program that attracted Dunn to Gift of Life, Freund says the organization remains focused on attracting young, healthy, and diverse donors. The organization has partnered with the NAACP and its Youth and College Division to build a more diverse donor base.

Gift of Life’s #BloodIsThicker campaign showcases the disparities in blood cancer as well as the broader issues the pandemic has further exposed. Only 25 percent of African American patients are able to find a matching donor, while 98 percent of white patients can. Hispanic patients have a 55 percent rate, Asians are at 40 percent, and multiracial patients have a 25 percent chance.

We can be heroes

Dunn is in Ohio these days, working toward a master’s degree that will help him “drive health care forward.”

“We can’t get complacent right now,” he says. “I want to explore everything from new treatments to better payment systems.”

His individual act to drive health care forward with a PBSC donation was met with a thank-you note from his anonymous recipient. She was feeling great, she reported. Privacy laws keep them from meeting for an extended period, and Dunn has no idea if they ever will connect in person. For now, he’s satisfied to imagine his recipient living her best life.

“I have no idea where she is in the world, what country she’s from,” he says. “Maybe she’s from Ohio. Maybe I’ve passed her on the street. It’s insane how connected we are.”