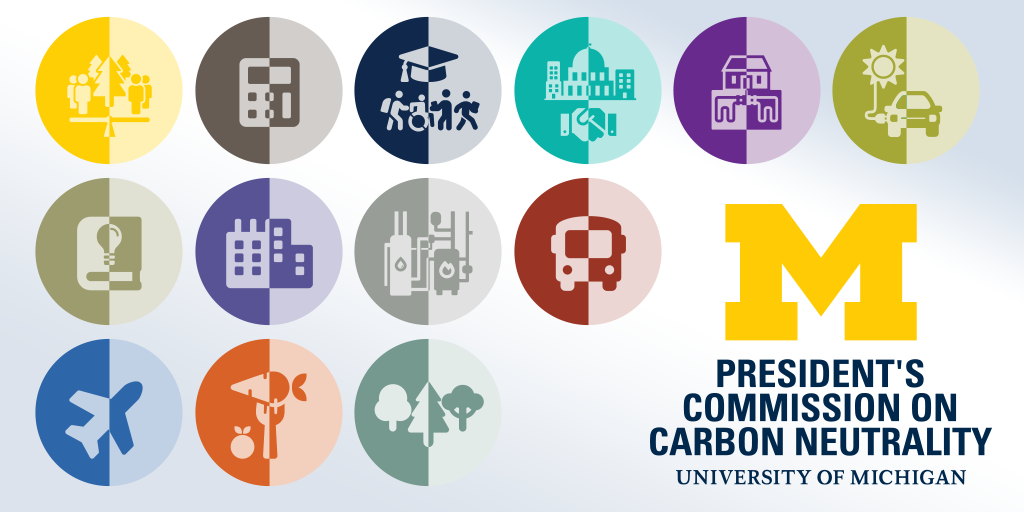 Getting to net zero

On March 25, the U-M Regents voted to discontinue the University’s investments in the largest contributors to greenhouse gases. In addition, U-M will immediately shift its natural resources investments to focus more on renewable energy. Read more.

The report outlines a pathway for U-M to:

Carbon neutrality is achieved when an institution reduces its quantifiable greenhouse gas emissions to net-zero—whereby remaining emissions are balanced by investments in carbon credits or removal/sequestration projects.

The report marks the culmination of the commission’s two-year endeavor to identify scalable, transferable, and financially responsible strategies to reduce emissions Universitywide.

“Combating climate change remains global society’s greatest challenge because of its urgency and potential adverse impact on all of the Earth’s inhabitants and everything that we do. Success will require the collaboration of many disciplines and all institutions,” says U-M President Mark Schlissel.

“I applaud the President’s Commission on Carbon Neutrality for leveraging the strengths of our university and broader community to bring forward a comprehensive report. I look forward to reviewing each recommendation with university leadership to determine U-M’s best path forward.”

In addition, the commission received and considered more than 700 public comments over the course of its process from more than 400 U-M students, staff, faculty members, alumni, and community members. 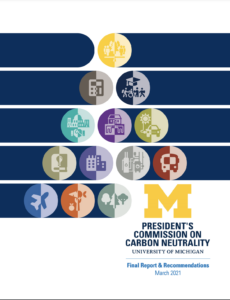 The proposed actions are now in the hands of University leadership for further analysis and decision-making. Schlissel, the U-M Board of Regents, and other University leaders, upon reviewing the report, will determine U-M’s immediate, short-term and long-term climate actions and plans.

“We’re confident that the steps outlined in our report provide U-M with a bold, feasible, and just path toward carbon neutrality,” says Stephen Forrest, commission co-chair and professor of electrical engineering and computer science, physics, and material sciences and engineering.

“The report spans emissions scopes, disciplines, and leading topics in sustainability, and community input has been critical in making it as thorough as it is. After we released the draft report for public feedback, we received 521 public comments, representing more than 200 campus units. We’re immeasurably encouraged by the interest in and ideas around this work, which push U-M to be a leading university in sustainability.”

Following feedback related to its draft report, released in December 2020, the commission bolstered recommendations pertaining to University organization and culture, and focused on environmental justice implications more comprehensively throughout.

“The commission recognizes the intrinsic connection between carbon neutrality efforts and environmental justice and, accordingly, the need to pose solutions that address both,” the report reads.

“We chose to highlight organizational recommendations and environmental justice considerations in large part because they can foster a culture of sustainability that complements our technical, emissions-reduction recommendations,” says Jennifer Haverkamp, commission co-chair and Graham Family Director of the Graham Sustainability Institute.

“Our community comprises more than 100,000 students, staff, and faculty, and our path toward carbon neutrality requires that they all feel empowered, represented, and responsible. We’re confident that in this report, everyone will find something directly relevant to their daily experience at U-M.”

Organization and culture recommendations include, among other actions:

Emissions mitigation recommendations include, among other actions:

Other draft recommendations relate to new building standards to reduce carbon emissions both in their construction and use, alternatives for University-sponsored travel, commuting, plant-forward dining options, upstream emissions, biosequestration, and carbon offsets.

Though the commission calls for the use of carbon offsets to accelerate Scope 1 neutrality, a number of commissioners would prioritize the elimination of on-campus emissions over offsets.