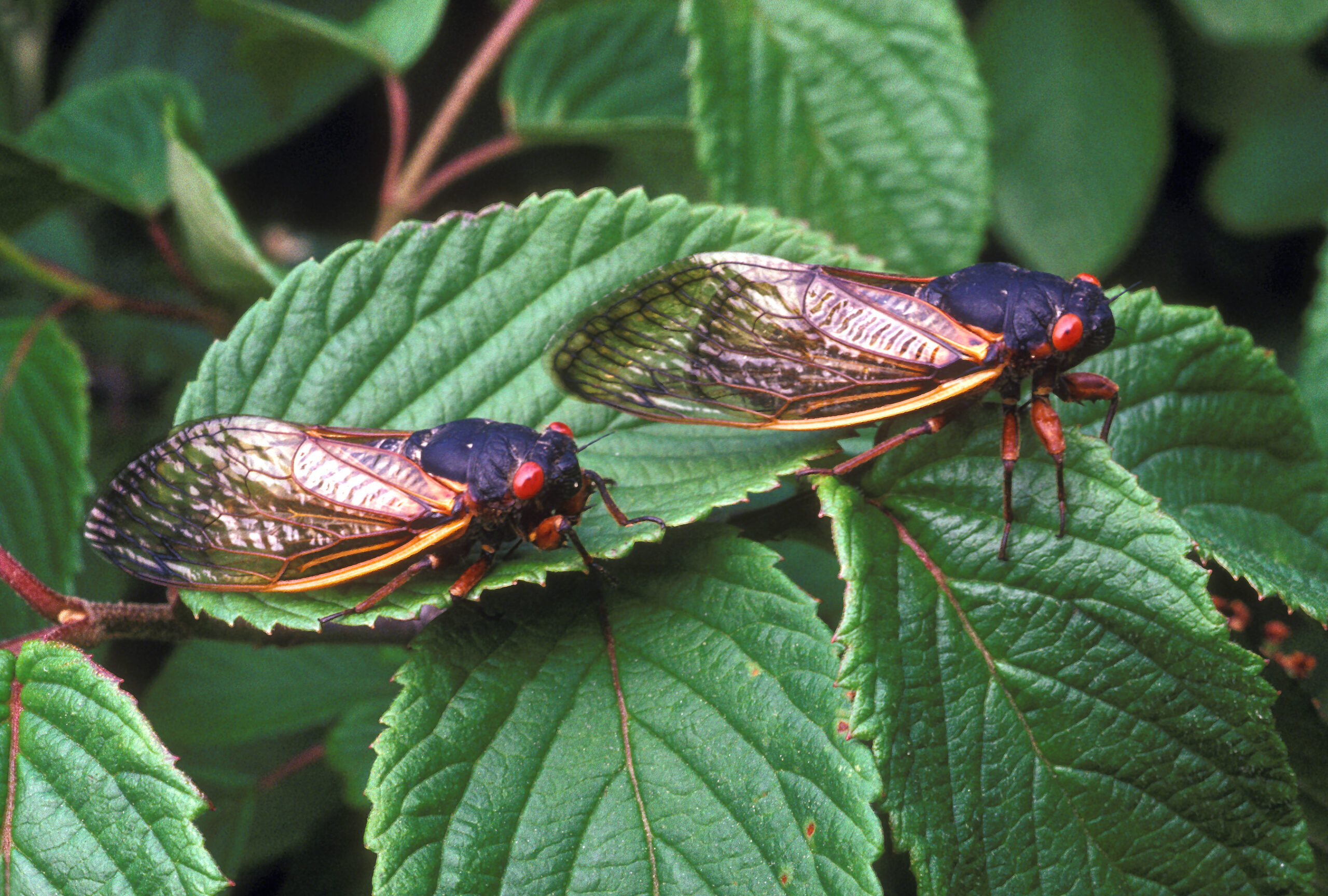 University of Michigan entomologist Thomas Moore spent years driving back roads across the eastern United States with his car windows rolled down, listening intently for the buzz of periodical cicadas. 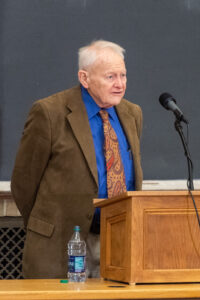 “I’d drive all day long — as long as the weather was good — from one end of the population to the other. One little brief burst of song and I’d know who was singing,” says Moore, an emeritus professor of biology, now 91, who studied cicada sound production and perception.

Moore, who joined the U-M faculty in 1956 and retired in 2000 from the Department of Ecology and Evolutionary Biology and Museum of Zoology, was interested in both annual cicadas and periodical creatures, the ones that emerge every 13 or 17 years.

He always has been fascinated by these buzzing, bug-eyed hordes and is eagerly awaiting the arrival of the periodical cicada group known as Brood X, which is expected to emerge by the billions in May in parts of southeastern Michigan and in a handful of other states in the eastern half of the country, after developing underground for 17 years.

In fact, Moore says he has already seen — in the yard of his westside Ann Arbor home — signs that the emergence of the first adult cicadas has begun. Holes in the ground the diameter of Moore’s little finger and small mounds of soil called turrets indicate that the first insects are emerging after developing underground for 17 years. Moore says he hasn’t yet spotted any of the inch-long bugs.

“I’m quite confident that’s what has happened and that adults are emerging now,” Moore says. “We should begin to hear some singing as soon as it warms up a bit.”

Over the decades, during multiple multistate treks, Moore would pull over when he heard the telltale buzz of cicadas. He’d grab his 2-foot-diameter parabolic aluminum dish, which had a microphone mounted at the center, and record cicada songs. He’d also collect insect samples for the U-M zoology museum. 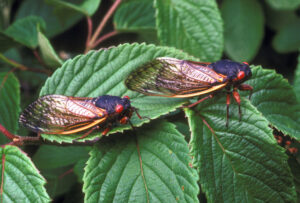 Magicicada cicadas like these will emerge from the ground soon after developing underground for 17 years. (Image credit: USDA Agricultural Research Service.)

“What’s quite striking to me is that there are three different species of cicadas involved, each with a distinctive song, and all three are emerging in synchrony after 17 years. That’s kind of amazing,” Moore says.

Male periodical cicadas produce songs using a pair of ridged membranes on the abdomen called tymbals. During an emergence, males gather and sing in dense aggregations called choruses. Moore was so attuned to these choruses that he could estimate their numbers and stage of courtship as he drove through an emergence area.

There are a couple thousand species of cicadas in the world, but periodical cicadas are only found in eastern North America, Moore says.

Periodical cicadas that have the same life cycle and that emerge in a given year are known collectively as a brood. Broods are designated by Roman numerals, and the group about to emerge in the eastern U.S. is called Brood X.

Brood X is among the largest broods of 17-year cicadas by geographical extent and has a patchwork distribution that ranges east to Long Island, south to Georgia, west to Illinois, and north to southeastern Michigan.

“My advice is to prepare yourself to enjoy,” Moore says. “It’s an interesting phenomenon in nature that you can observe, and it won’t occur again in the same place for 17 years.”

“Prepare yourself and enjoy”

Tom O’Dell, a natural areas specialist at U-M’s Matthaei Botanical Gardens and Nichols Arboretum, recalls the day in 2004 — the last time Brood X cicadas visited Ann Arbor — when he saw the insects in a grove of buckeye trees at the botanical gardens.

“There were thousands of individuals on the branches and trunks,” O’Dell says. “They were so loud a co-worker and I could not hold a conversation within five feet of each other at normal volume.” 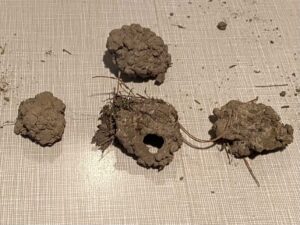 Mounds of soil called turrets that indicate the emergence of Brood X 17-year periodical cicadas has begun in southeast Michigan, according to University of Michigan entomologist Thomas Moore, who has studied the insects for more than 60 years. The photos were taken Friday, April 23, at Moore’s westside Ann Arbor home. Moore says he also observed holes in the ground the diameter of his little finger where adult periodical cicadas had emerged. He has not yet spotted any of the insects. (Photo courtesy of Thomas Moore.)

After the 2004 visit, there was damage to some small-diameter limbs in the botanical gardens in which cicada eggs were deposited. But the damage was largely cosmetic, and “that damage is hard to discern” today, O’Dell says.

Decades ago, the painstaking fieldwork by Moore and former U-M biologist Richard Alexander, who died in 2018, led to the publication of a 1962 monograph that is still considered “one of the most important of all works on periodical cicadas,” according to University of Connecticut cicada expert John Cooley, who was a U-M graduate student under Alexander.

The monograph, titled “The Evolutionary Relationships of 17-Year and 13-Year Cicadas, and Three New Species,” confirmed that there are multiple species in most broods of periodical cicadas.

“The periodical cicadas make up a truly amazing group of animals; since their discovery over 300 years ago, the origin and significance of their extended life cycles have been a continual source of puzzlement to biologists,” Moore and Alexander wrote.

“Their incredible ability to merge by the millions as noisy, flying, gregarious … adults within a matter of hours after having spent 13 or 17 years underground as silent, burrowing, solitary, sedentary juveniles is without parallel in the animal kingdom.”

Read more: 17-year cicadas and tree damage: What to expect

Overall, cicadas may be good for forests, which may experience a growth spurt the year after an emergence, Moore notes. “The emergence holes allow sunlight, air, water, and nutrients to penetrate more rapidly and to greater depths into the soil than typically.” Indeed, the very presence of cicadas is a sign of a robust forest, he adds.

The upcoming cicada spectacle will mark the sixth Brood X emergence in Moore’s lifetime. So, does he plan to pull out his parabolic dish or perhaps fry some of the inch-long insects in butter (they taste like popcorn, Moore reports) as he sometimes did in the past?

“I probably will not collect them and fry them and eat them this time, but who knows,” Moore says. “I will be out and around a little bit. But at 91 I’m not going to make great sweeps across the country, like I once did.”

Moore’s days of cross-country road trips may be over, but he’ll still be listening for the distinctive calls of countless cicadas. The adults will spend up to six weeks engaged in raucous reproductive behavior before dying and leaving behind millions of tiny offspring to burrow into the soil and start the 17-year cycle all over again.

“It will be loud for most of a month, with inch-long cicadas outside singing,” Moore says. “They sing, mate, lay eggs, sing a little more, and then they die.”